I am looking for the easiest solution to

In considered the following solutions:

Two application circuits are given in the datasheet: 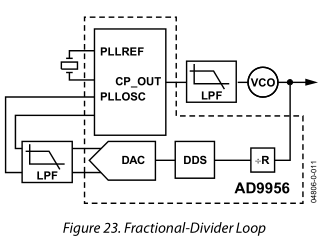 but I do not understand them. What would be the switching time from, say 1.6 to 2.4 GHz for these?

One option is using a DDS that can reach 1.2 GHz, with a frequency doubler.

Doublers are essentially just some nonlinear circuit to produce harmonics with some filtering to pick out the preferred 2nd harmonic at the output, so they don't require any lock-in time when changing frequency (aside from that implied by the bandwidth of the selection filter).

Doublers tend to allow at least a bit of the input frequency (perhaps 20 dB or so below the 2nd-harmonic output), and also its 3rd harmonic, through to the output, so some careful filtering, or even an adjustable filter, might be required if you need a very pure output frequency.

Doublers also tend to be a bit fussy about the power level at the input, and produce an output attenuated from the input level, so you may need some additional amplification and/or attenuation to get the scheme working well.

Two application circuits are given in the [AD9566] datasheet... What would be the switching time from, say 1.6 to 2.4 GHz for these?

Those are both essentially PLL schemes. The switching time will be limited by the bandwidth of the loop filter. I'd expect it to be difficult to get it below a several 10's of ns. Although 50 ns doesn't seem totally out of the question if the loop bandwidth can be as high as 20 MHz. (This also applies to your proposal of a straight PLL solution)

I would concentrate on the VCO and try to find a design that has a reliable change in frequency per volt. Something that can almost be run "open-loop".

This is a priority because my suggestion would be to use a PLL but with feedforward to get you the speed (and distance to the next hop) then the PLL loop would tweak the final few MHz. So how accurate and in what time do you want it to be?

You can get quadrature outputs using two resistors, an inductor and a capacitor across a vast range of frequencies but with some amplitude variations.

One option would be DDS in the lower frequency range (e.g. AD9956) and double conversion with a LO switchable in 200MHz or 400MHz steps.

While double conversion may look more complex, it means you can avoid I-Q mixing, because it allows you to place the image well out of the band of interest.

For example, if DDS can comfortably cover 100-300MHz, then a simple conversion with a LO of 500MHz would give an upper sideband of 600-800MHz and an easily rejected lower sideband.

Then another simple conversion with four spot frequencies of 1.0, 1.2, 1.4 or 1.6GHz would cover the required range. (The last LO reaches the bottom of the band here, so the mixer should be balanced for low LO leakage)

Variations are obviously possible; if DDS can easily cover a 300MHz low band range, then only 3 spot frequencies would be required. It may be possible to make the 2nd LO spot frequencies harmonics of the first LO. And so on.

You can use a AWG + DDS + Marki IQ-1545 IQ Mixer if you need to have baseband modulation. (Else a DDS can have good results on CW frequency hopping). There are always IQ mismatch in component. You need to measure it and perform calibration either by predistortion or equalization. You cannot escape that if you want good performance.

The calibration can be perform either at the IQ files, or for high quality AWG, one can control the phase, time and amplitude differences in between I and Q.

Referring to your list of requirements, synthesizing up to 2.4 GHz (quadrature) and settling within 10-50 ns are probably the main parameters limiting your choices of synthesis method. It rules out PLL only; though PLL could be used in a hybrid design. The intended end-use can also assist in choosing one integrated circuit over another.

There are a number of different categories of frequency hopping:

Depending upon which types of hop is needed it may be possible to find an integrated circuit specifically for the purpose, relying on a mass production device over something with additional unneeded features.

The manufacturers of the integrated circuits have a number of helpful training videos available:

The DACs that I suggest below are alternatives to the AD9914/AD9915 that you were looking at.

The frequency produced can maintain phase in two different ways: 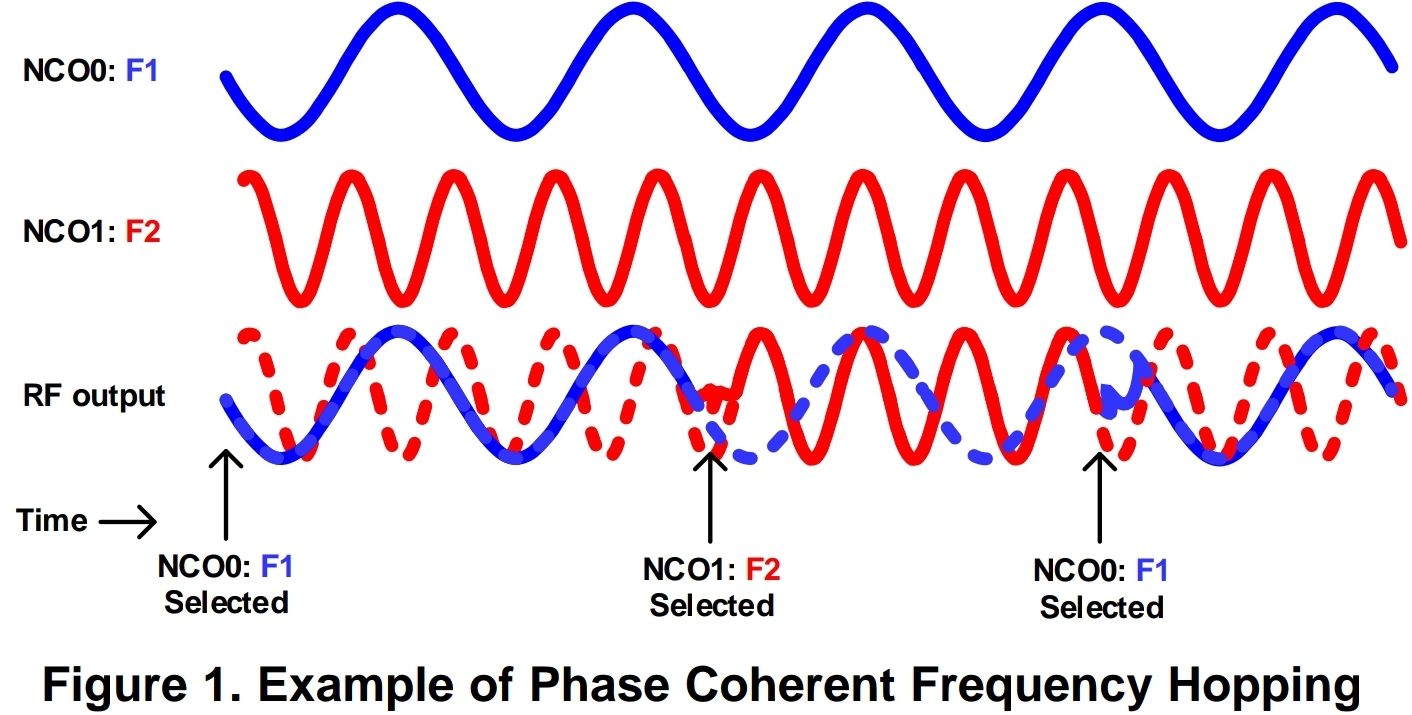 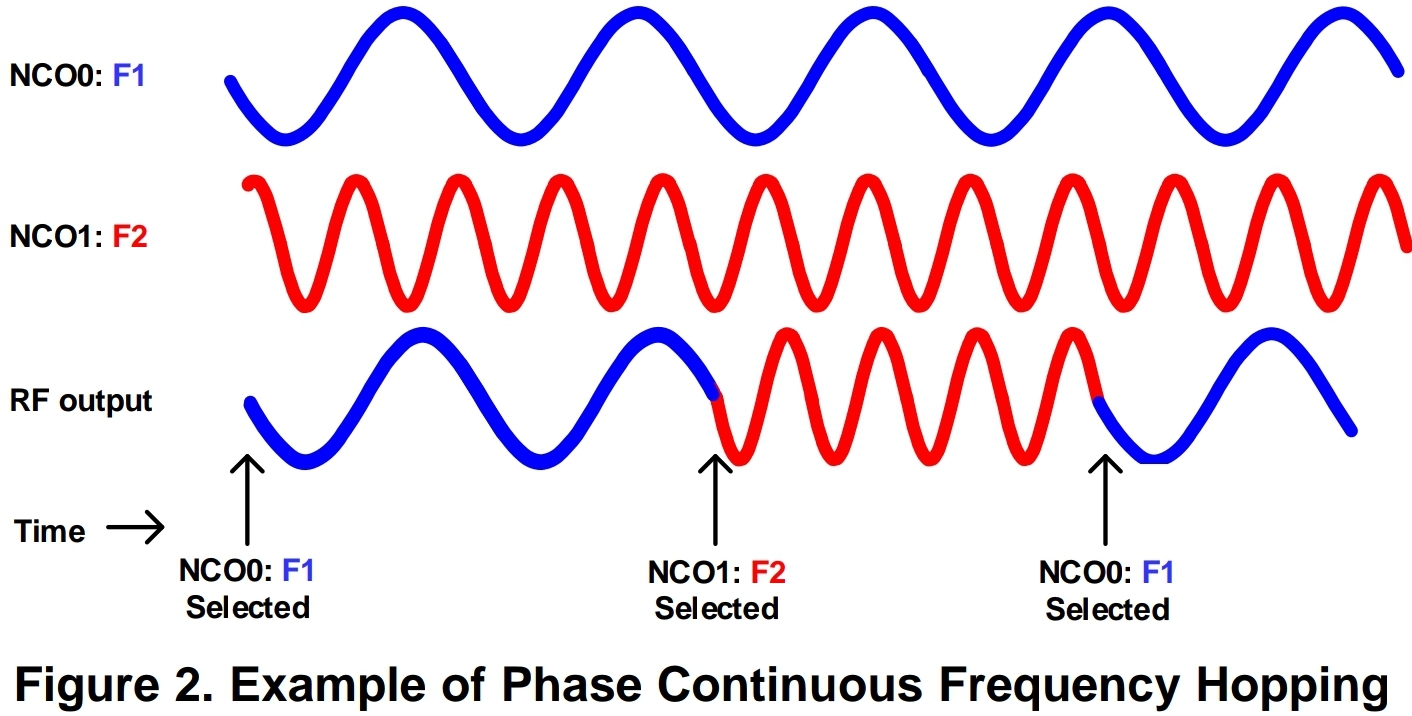 Image source: "Evaluating the frequency hopping capability of the AFE74xx"

A general approximation relating rise time to the spectral bandwidth is:

Of course a pure sine wave won't have that bandwidth, but rapidly switching from one frequency to another increases the bandwidth momentarily or filtering smooths the transition time and affects the rate change.

"The clock distribution is usually generated by an instrument during characterization, allowing a wide range of reference frequencies. The clock distribution circuit serves to buffer the incoming reference and sets up the appropriate tirning between the digital part of the DDS and the BAC. The important specifications here are the DAC's input data setup and hold times. Even a slight violation of these specifications can cause an increase in glitch impulse if the latch is transparent, or capture of erroneous data if the latch is edge triggered.".

\$\text{CBR}\$ is the bandwidth requirement;
\$\Delta f\$ is the peak frequency deviation;
\$f_{m}\$ is the highest frequency in the modulating signal.

The "glitch impulse" and clock feedthrough are important, as well as the "settling time" which depends upon a number of hard to predict and calculate factors, but it will be much less than what is incurred by using a PLL (assuming proper design). 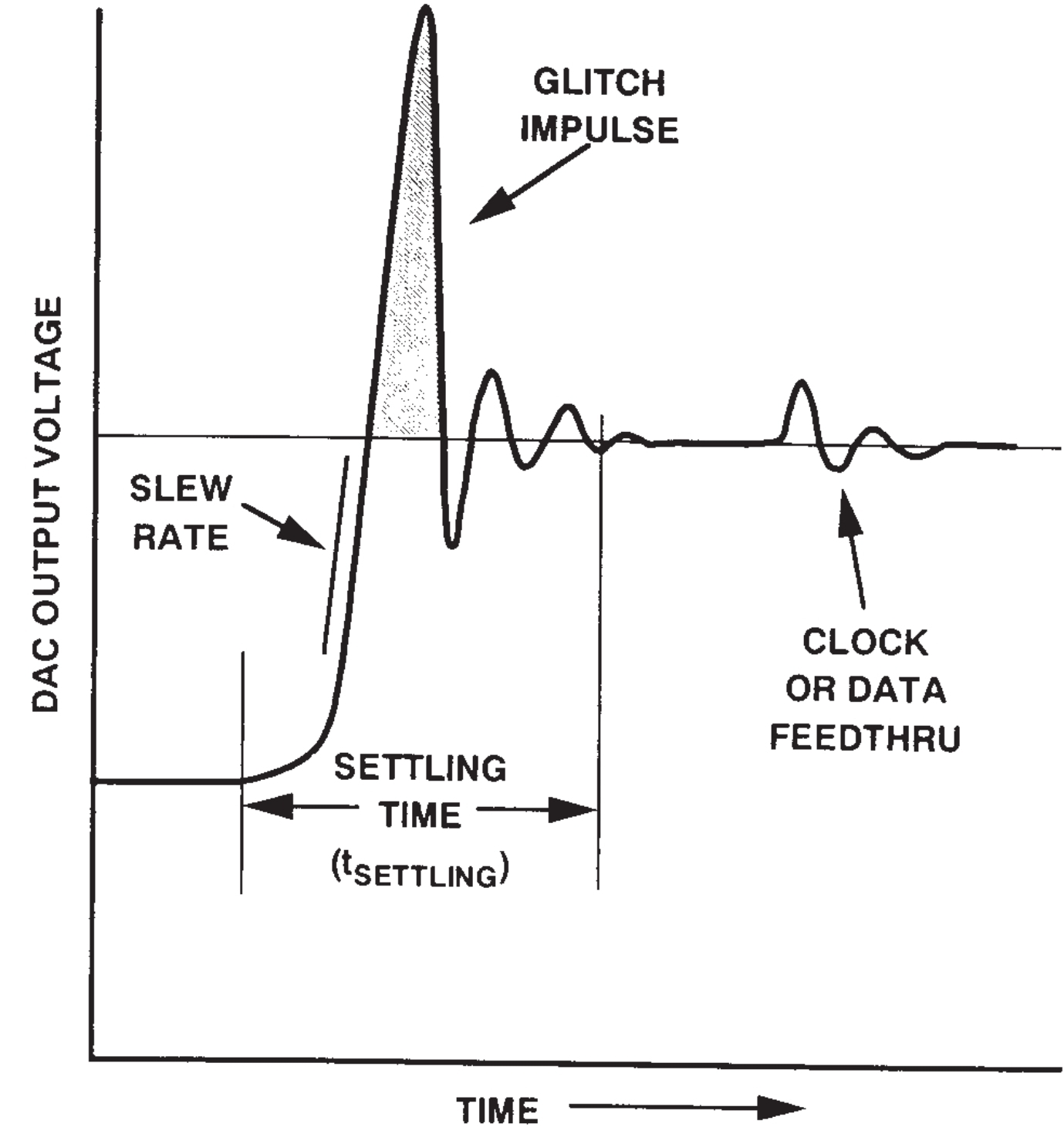 I'll return to this answer next week, when I have more time available.

Not the answer you're looking for? Browse other questions tagged rf high-frequency pll dds frequency-synthesis or ask your own question.

6
What are the functional differences between a digital sampling 'scope and a digital spectrum analyzer?
5
How to test RF (1GHz) PCBs?
3
UHF Phase Modulation
2
Sawtooth/ramp waves with fixed amplitude from sine or square clock source?
1
How do I generate a high frequency sine wave using a PLL? 900 to 950 MHz
4
Understanding requirements for USB 2.0 high-speed
5
MCU clock drift and radio frequency drift - are they the same?