Can someone explain how this RFI filter works?

This is an RFI filter from a 12V automotive DC motor. This motor design is over 20 years old and currently in "service" production. We just learned that the capacitor we're using is now in short supply and we need a replacement. Unfortunately, we can't find a comparable capacitor that also satisfies our mechanical dimension constraints.

We're starting to look at possibly using a smaller capacitor that will still satisfy our noise requirements. It's been a very long time since I've had to think about a filter. 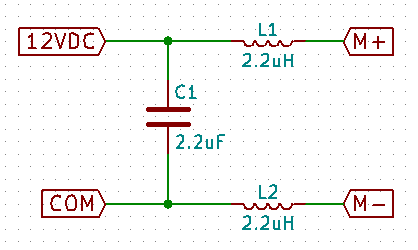 Brushed DC motors can produce quite spiky commutation current so I expect the filter is to stop excessive noise getting from the motor and onto the 12 VDC power supply. The inductors and capacitor (together) form a 2nd order low pass filter.

It's difficult to say anything more without an in-depth motor analysis but If you are trying to replace the 2.2 uF polyester capacitor it's best to try and find something as close as possible. I could make guesses here and there but these are not warranted because the number of capacitors of this type that are available is staggering.

Changing the capacitor to 1 uF will increase the cut-off frequency from about 51 kHz to about 76 kHz. This may still be OK but it's not for me to say.

Commutation in DC motors start complex oscillations in the windings. (see NOTE) The sparks in the brushes are actually high frequancy AC currents which jump over the air gap. There's not a single frequency. The windings have complex distributed capacitance and inductance which make them work as a bunch of resonant circuits which all oscillate in different frequencies. In addition the abrupt starting of those oscillations means also that the oscillations cover wide frequency band, as one could prove with Fourier's mathematics.

Think your motor as radio frequency generator which eats DC and returns through same wires AC bursts. New bursts start 800 times per second as you have calculated, but their frequency content depend on the winding structure. In practice without the filter those bursts would spread everywhere in your car and make at least enjoyable LW, MW and SW radio reception impossible - except the case you like 800Hz buzz. It could also jump to audio frequency circuits and cause hearable buzzing due the nonlinearity of practical circuits (=unwanted radio signal detection in the presence of strong enough signal)

The filter is a classical low pass filter which causes remarkable attenuation at the assumed harmful oscillation band. Think the coils as high resistance for RF AC and the capacitor as a remarkable short circuit like loading for them. Of course, an exact analysis would need proper AC circuit calculations and some measured facts of the resonances in the windings to see what kind of signals the motor serves to the external world.

The filter doesn't eat the AC bursts, but reflects them back to the motor where they are soon attenuated in the resistances and magnetic losses in the iron, which isn't perfect inductor core material in radio frequencies.

A replacement capacitor? As suggested already, I also bet that a low voltage, say 25 volt ceramic or plastic insulation cap will do. If you have proper electronics measurement tools and skills (=an oscilloscope+perfect usage skills) you could measure how much AC current flows though the cap and be sure you have strong enough type.

Electrolytics can also work. You can test it with an AM radio.

Beware: Car is a hostile environment. Do not expect hobbyist quality parts stay alive in the vibrations and temperature changes in a car.

NOTE: Actually as early as 1875 inventor T.A. Edison was confirmed that something special beyond normal induction happens in systems where sparky on/off connections happen with inductors, something which spreads even without wires and is effective far beyond the range of normal induction. Edison was an ingenious practical electrician but unfortunately not a mathematician. Otherwise he might have seen a connection to Maxwell's electromagnetic waves, which definitely were in 1875 only a speculation (=existent in theoretical calculations but still not detected nor measured)

It just means there will be twice as much chance you hear noise on a weak AM radio station near the low end.

the transfer function is a LPF with the Motor DCR and battery C further attenuated by a 2nd order 75kHz break point by the differential LC. Changing C /2 only raises the spurious resonances and breakpoints by 1.4x the frequency.

The sole purpose is to eliminate commutation noise in the AM bands below ambient levels.

Not the answer you're looking for? Browse other questions tagged filter inductor low-pass emi-filtering brushed-dc-motor or ask your own question.

2
How to correctly simulate this filter?
0
RFI/AC Filter Rejection for Instrumenation Amplifiers
7
How do I properly size components for an EMC filter for a variable frequency drive power supply?
1
How the low pass filter works in this circuit?
0
Can someone explain how frequency and inductance affects this pair of coupled inductors?
2
How to read markings on EMI/RFI filter
1
Synthesizing this simple analog notch filter?
0
Difference between EMI filter and RFI filter
3
Can someone explain me these waveforms?