Am I unwise to power a low-draw cooling fan off my router's USB port?

tl;dr: I want to run a 120mm case fan (drawing 0.05A) off my router's USB port, and don't know whether to be concerned about running a DC motor off a sensitive box full of radios.

The CPU in my (ASUS RT-AC3200) Wi-Fi router has a tendency to self-report temps of 70°C and higher when working hard.

Because of my (admittedly potentially unfounded) concern about that temp, and because I like to tinker, I tried sitting the router atop a garden-variety 120mm case fan (marked 12V 0.16A), which I fed just 5V to keep it slow and quiet.

The router temp soon dropped to 57°C, which I like much better.

Given the installation of the router, it would be quite handy to power this fan off the router's USB port.

Though I don't know the USB port's specs, a current draw of 0.05A doesn't strike me as troubling--I know it will fundamentally "work."

What does give me pause, though, is putting a motor on the power bus of a box of sensitive radios, for fear of generating problematic electrical noise or causing other woes.

Should I avoid this? Or am I being paranoid?

All USB hosts must however be able to provide 100mA by default, so in terms of current you should have no issues.

However, fans are inductive and could produce back-EMF when the power switches off. This is basically a high voltage spike that will feed back into the USB port. Depending on how well protected the port is, this shouldn't be an issue. I would personally place a diode in anti-parallel with the fan (anode to GND). This will add some additional protection.

Another potential issue is that if the fan stalls, you may get a current surge as a result because the fan is basically just a DC motor, and current could rise rapidly under stall condition. This is likely not an issue with higher quality fans. Placing something like a 15Ω resistor in series between the 5V and the fan will limit the maximum current that can be drawn in the event of a stall. It will cause ~0.5V drop under normal conditions, but this shouldn't be an issue for the fan.

As a final point, the fan will generate electrical noise. I would personally place something like a 10μF capacitor across the USB +5V/GND pins. This in combination with the 15Ω resistor will act as a low pass filter, limiting the amount of noise that gets back into the device from the motor.

So I though I would do a quick investigation with a branded (£8) fan, to see if my points about noise and filtering, quote "... are unfounded" (@AliChen)

So here is my PSU. I'm loading it with a ~33mA pure resistive load, which is an equivalent current draw to the fan: 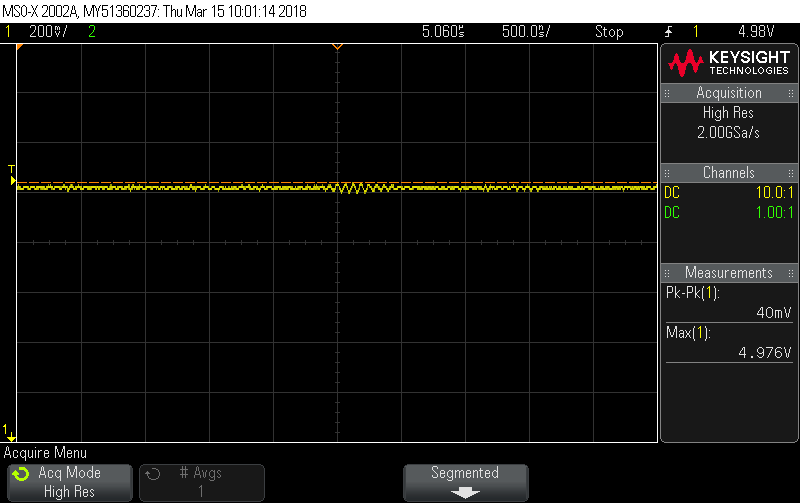 Not bad I think you would agree. Regulating nicely, with ~40mV ripple/noise.

Now lets connect the fan. The fan draws roughly 33mA from the PSU, and is spinning happily. 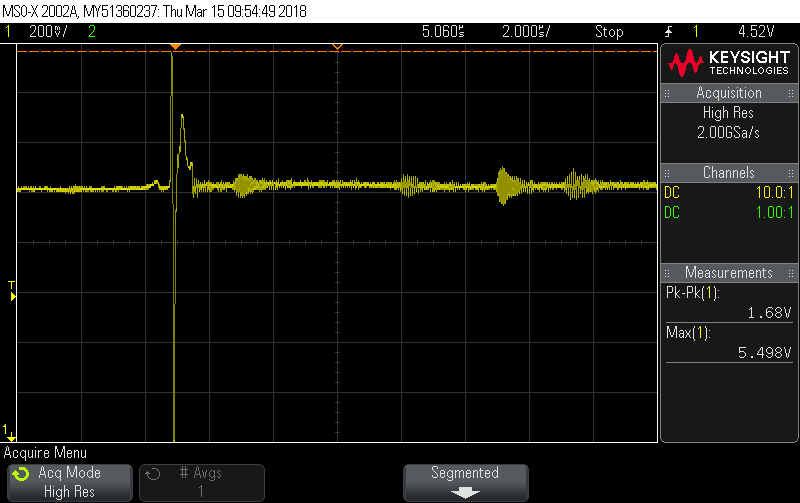 There are now period spikes pulsing up to ~5.5V, with a large amount of ripple and noise (~200mVpp). I personally don't want that anywhere near a USB port.

Now lets put a capacitor across it: 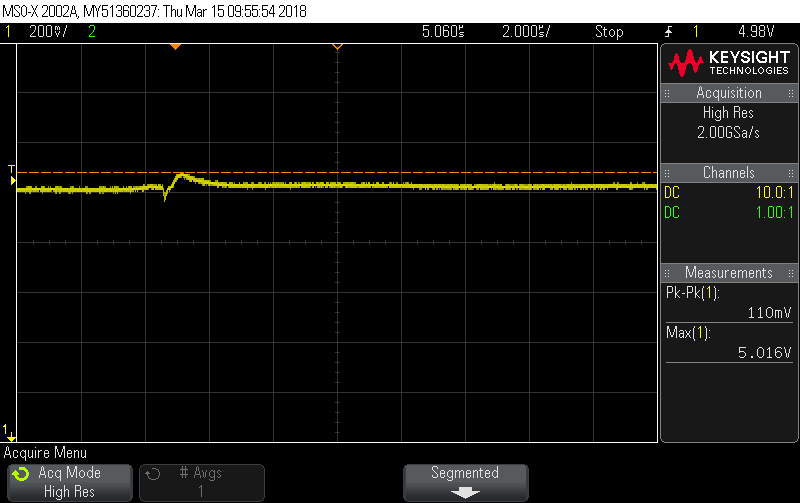 Not bad, filters out a lot of the mess.

Now with a series resistor as well, same circuit as in the main answer above (minus the diode). I'm probing on the power supply side. 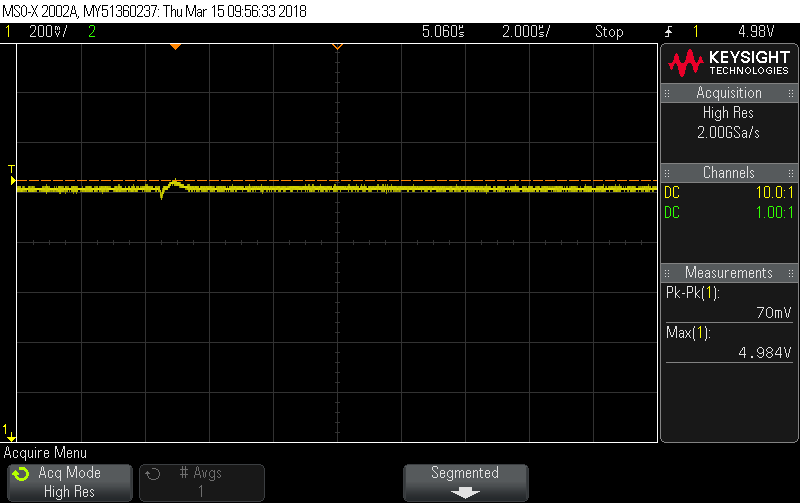 Even better. The spikes are cleaned up to ~70mVpp, and the noise is pretty clean.

As another point of interest, this particular fan draws about 55mA in a stall condition, so not too bad.

The ASUS RT-AC3200 gigabit router has USB 2.0 and USB 3.0 ports. As a self-powered device, the ports should be expected to deliver no less than 500 mA of current from USB2 port, and 900 mA from USB3 port. This is in accord with Section 7.2.1 of USB 2.0 specifications, which reads in part: "Systems that obtain operating power externally, either AC or DC, must supply at least five unit loads to each port." Therefore it should be of no concern to take 50 mA out of any of these ports.

Then, modern PC case fans are built on brushless technology, with a driver IC that uses magneto-sensitive index sensors, and then pulses internal stator windings accordingly to make the fan's blades to spin. A typical motor driver IC application is:

Due to massive deployment of fans in PC industry and associated potential liabilities from mechanical failures, the technology has developed fairly sophisticated methods to prevent electrical problems. The controllers (and internal boards) in PC fans have all sorts of protection against EMI, temperature, stalls, etc. The ICs would usually shut itself down if the rotor blades are not spinning.

Many manufacturers guarantee a 12-V fan operating range from 6 to 18 V, example is here.

Therefore operating a 12-V fan at 5 V is not far away from main specifications, and is frequently used in "silent PC" designs by DIYers. It is however advisable to check if the particular fan has any margins in this mode. This can be checked either using a variable benchtop power supply and dropping the voltage until the fan no longer starts, or just stalling the blade and making sure that the spin starts "happily", softly speaking.

Further, a USB port is required to have a sizable bypass capacitor on each USB host port. An example of the bypass from design guidance is shown below

Furthermore, in case of several USB ports, design recommendations are to use separate bypass caps on each port, and de-couple them from main power source with inductive filters, 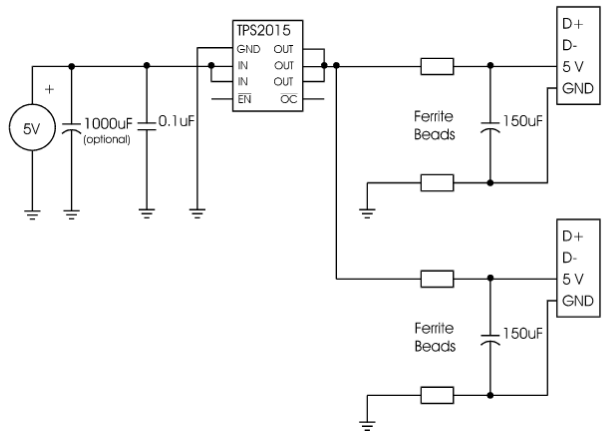 This technique is required to avoid so-called "droop" effect, when a hot plug of a device in one port might cause power interruption for a device working in another port. Without this de-coupling a USB host would fail USB-IF certification. Therefore, any possible interference on power at one port is unlikely to penetrate internals of USB host and disrupt USB or any radio functionality.

In conclusion, just plug your fan into any of USB ports of your router, and, if it spins "happily", don't worry much.

Not the answer you're looking for? Browse other questions tagged usb dc-motor noise wifi or ask your own question.