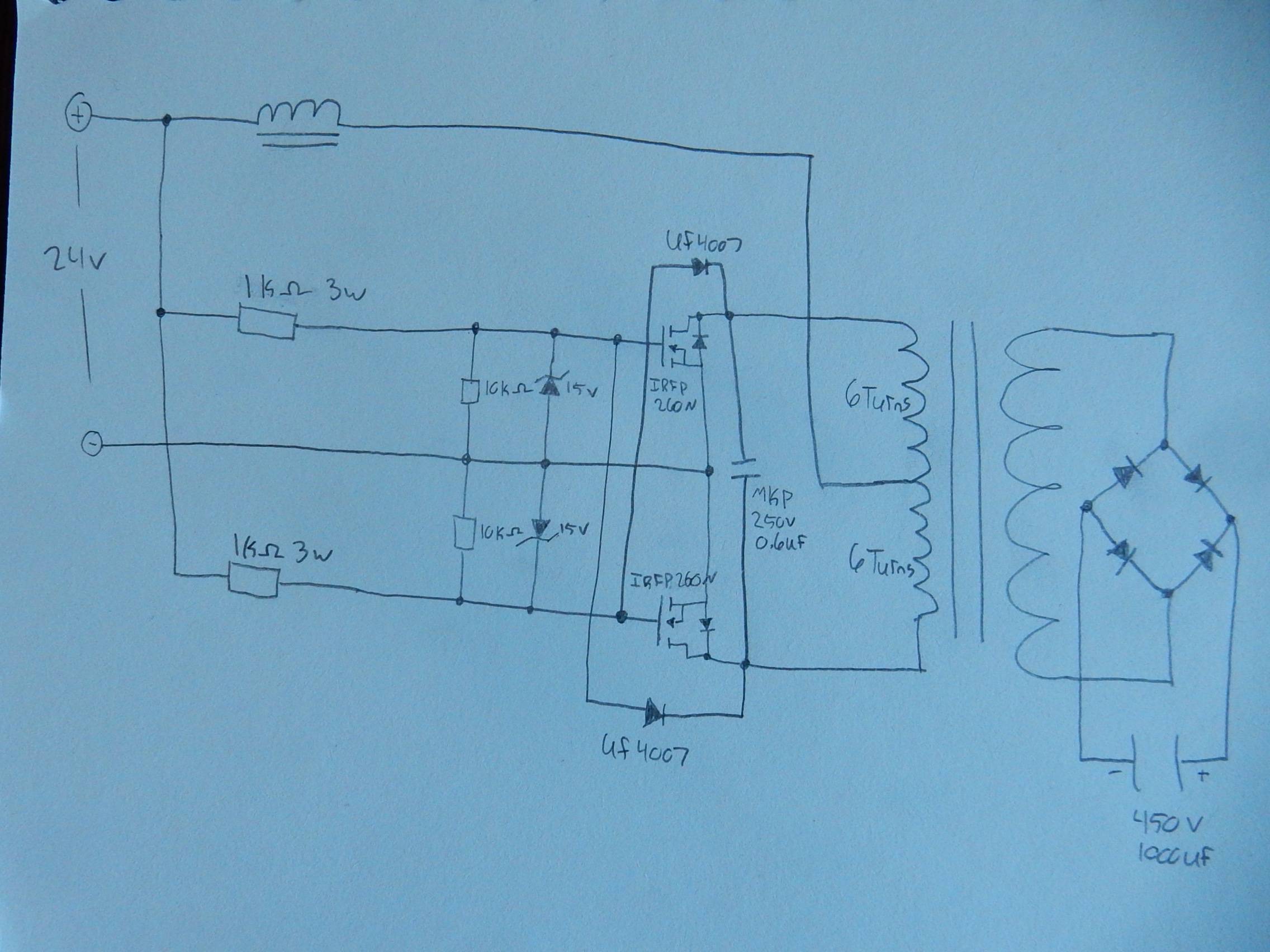 I built this ZVS driver to make some big high voltage sparks a while ago. It worked off three voltages 24V, 50V, and 80V and had no issues. The only part of it that got really hot were the 1kohm 3W resistors.

Recently I decided to play around with coil guns so i used it to charge up a capacitor bank as show in the picture. The rectifier diodes are just regular 4007's

The problem I'm having is this. When i charge up the capacitors it doesnt make a high pitched whine like it normally does, it (the transformer, which is a ferrite core from an old TV) makes this really awful chattering sound that starts off really rough sounding and eventually turns into the whine as the capacitor fully charges. Seems like a current issue where its drawing more current at the initial stages of charging and less as the voltage in the cap rises. However, it doesnt do this when i simply shortage secondary and that should draw maximum current. After a few charges, for the first time ever, the MOSFET's were actually really hot and the chattering sound became random and the MOSFET's failed (due to over heating).

Does any one know what went wrong? Why is the transformer chattering and how do i make it stop?

I think i should have used UF4007's for the rectifier and I'm wondering if 1Kohm at 24V input is too high and i should go with the typical 470ohm. Maybe the high resistance is allowing the MOSFET's to stay on too long which might cause poor oscillation and cause the chattering?

I tested some of my theories, ( and blew some mosfets up...) but in all of my circuits the problem was that the secondary windings were made out of too thick wire, so the resistance of the secondary was around 1.1ohms, I tried to connect (highest wattage I found was 470ohms and 3w (was too small, some bluish smoke came out)) and it started the oscilation. then I re-wound the transformer, with much thinner wire, the resistance now was like 34 ohms. now even with the capasitors attached, it starts the oscilation. the transformers had (the first with too thick wire, 5+5 on primary and about 260 on secondary, the second transformer has 6+6 on primary and around 250 on secondary. Hope this helps

Improve the output diodes .They are far too slow .Now remember that the Cap bank will look like a short circuit when starting from a fully discharged state .You could use reactance to limit the current .This would change the Oscillation frequency but sensible calculations will keep things in the ball park .If you use an inductor that has the same inductance as your transformers secondary magnetising inductance you will get about 1.4:1 frequency ratio from fully discharged to fully charged which your circuit will cope with.Your mosfets will now be more reliable allowing you to fine tune the system .It is feasible to make your transformer very leaky allowing lower cost .I use a current limited buck convertor to precede the royer and defend the Fets but this costs more and is only suited to high reliability applications .

Not the answer you're looking for? Browse other questions tagged capacitor-charging zvs or ask your own question.