I previously had configured a PIC (16F1704) to use the internal FVR for ADC reference, with gain of the FVR set to 2x, i.e. 2.048V reference. I've since added another signal to be measured, but the signal spans 0..900mV only. I'm tempted to change the FVR's gain to 1x while reading this channel to get one bit more resolution.

Now, while changing the ADC channels it's recommended to introduce a small delay before you start the ADC conversion, so the input capacitor of the ADC can settle. I've been using 5µs delay (after each channel change) as recommended by a Microchip tutorial. Is there an equivalent delay associated with changing the FVR gain? I haven't found a recommendation on that, nor a datasheet value on the Independent Gain Amplifiers' settling times. 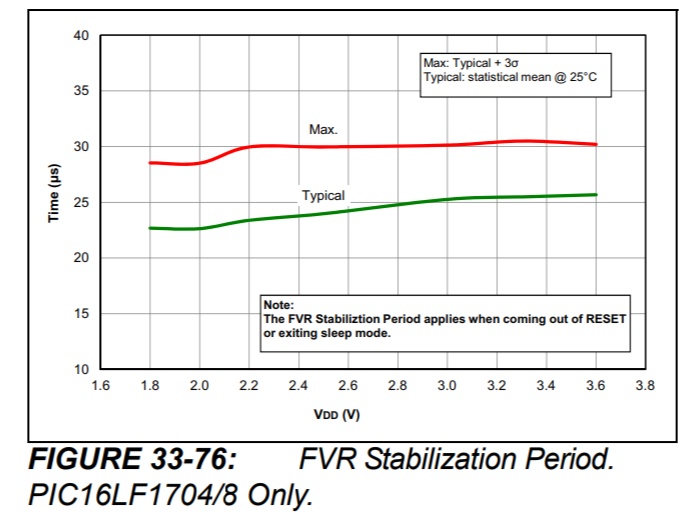 The datasheet only provides this figure for the FVR stabilization period, though this one implies only when coming out of RESET or exiting sleep mode.

Irregardless, I would use this as a starting point.

Not the answer you're looking for? Browse other questions tagged pic adc voltage-reference or ask your own question.