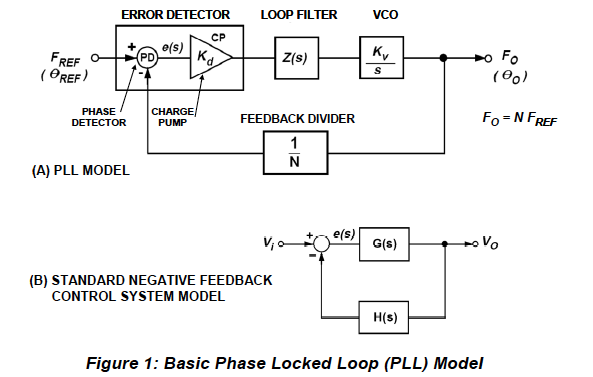 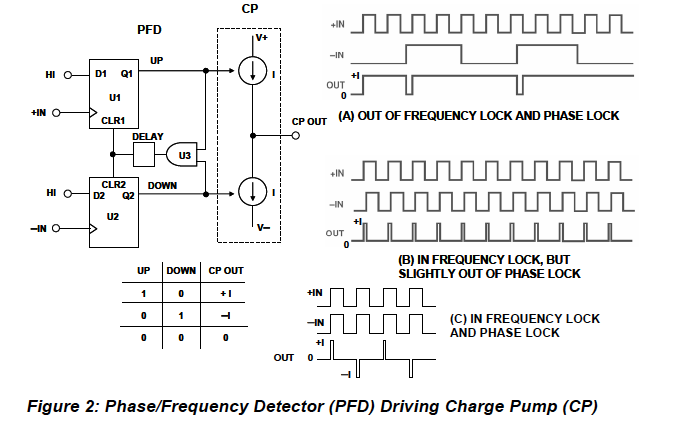 I have one of these common digital phase lock loops which compares the frequency and phase with a VCO (local oscillator) via a phase lock loop. I failed to understand why Figure (2) (A) and Figure (2)(B) seems to follow very different logic despite they are the same device.

How does one know what OUT look like given the form of signal from +IN and -IN?

2(C) shows the PFD with constant waveform time-delay, where the +IN always occurs some small time before the -IN edge. The Out waveform should be labeled "CP out", because that is the SUM of the two internal waveforms, the UP and the Down.

Let's back up a bit, and consider how this 2-FlipFlop PFD behaves (some PFDs have more internal logic, to achieve yet more useful behavior, but I'll let you research that). This simple PFD (and an EXOR gate is a PhaseDetector but not a Frequency Detector) pushes UP on the VCO if the Fref_input (re-label the +IN as Fref) rising edge occurs first.

And if the other input -In (re-label it as Fvar, from the voltage-controlled oscillator) rising edge occurs first, this PFD pushed DOWN on the VCO.

Here is a better drawing of the same logic diagram.

why Figure (2) (A) and Figure (2)(B) seems to follow very different logic despite they are the same device.

The XOR-type phase detector generates a signal which is most sensitive at a bias that corresponds to 90 degree phase shift between the two input signals. XOR detectors don't, however, deal gracefully with large frequency mismatch. XOR behavior is illustrated in figure 2B of the PFD hybrid datasheet. The other behavior is counter-type frequency detector, which is most sensitive to frequency differences (and is susceptible to noise from multiple-trigger events). It is that kind of detection illustrated in figure 2C.

How does one know what OUT look like given the form of signal from +IN and -IN?

That was the point of the illustrations 2A, 2B, 2C; to show the behaviors in several cases. 2B shows XOR-like phase detection, and 2C shows counter-like frequency detection, with some dependence on the phase shift. Figure 2A illustrates that a large frequency mismatch generates a large correction signal.

Not the answer you're looking for? Browse other questions tagged fpga frequency pll phase or ask your own question.

9
All Digital Phase Lock Loop
0
Select a correct voltage controlled oscillator IC
0
Phase Locked Loop: Confusion in Lock Range
3
How do I observe a PLL's frequency tracking once the lock has been acquired?
0
PLL Loop Filter and its influence on speed
1
Phase Detector for PLL: Operation and Realization
1
Dividing down a VHF signal in a 4046 based PLL loop
0
Low pass filter target frequency for a mixed signal frequency synthesizer
1
Trouble designing and understanding lowpass filter in analog (mixer) phase-locked loop (PLL)