However, some of those listed are used for transferring digital data (for example, RS-232).

Under what situations would it be necessary to have a bandwidth capable of measuring these digital lines as analog signals?

What important analog signals (or digital signals that should be tested as an analog signal) have higher frequencies than those listed above?

I assume "as an analog signal" means on an oscilloscope as opposed to a logic analyser.

For a digital signal, it is important to be able to check the signal integrity and see whether it is subject to problems such as ringing, crosstalk, reflections, jitter, attenuation, etc.

This can only be done with a scope with a bandwidth > the frequencies present in the signal - remember with a digital signal there are frequencies much higher than the fundamental present, how high is dictated by the rise time of the signal. For a 1MHz digital signal you would generally want at least a 5MHz bandwidth, preferably much higher.
For debugging a typical small microcontroller (e.g. PIC, Atmel AVR, Arduino, etc) a scope bandwidth of at least 50MHz is preferable. This should be capable of handling just about all situations you might encounter.

There are many signals above 1MHz that need checking, most microcontroller clock signals are > 1MHz, SPI is often > 1MHz, USB, etc. FPGA designs may run at 100s of MHz, high speed ADCs and DACs, etc.

On a logic analyser all you can see is whether it is above a certain level or below a certain level (like a 1-bit scope) so while useful in other ways they are not suitable for checking signal integrity.

The image below (taken on an MSO - Mixed Signal Oscillscope, a combination of a scope and logic analyser) is a good example of crosstalk causing problems and why a scope is needed to see what's really happening. Notice the waveforms are quite a way from the idea of a "perfect" digital signal:

For the leftmost red arrow the second trace down is the transmitting trace, and the top trace down is the "victim" (receiving trace) and the right hand pulse they are reversed. We can see on the rise of the "transmitting" signal it causes a spike in the receiving trace, resulting in a unwanted glitch on the logic display, which is what the digital receiver would "see". 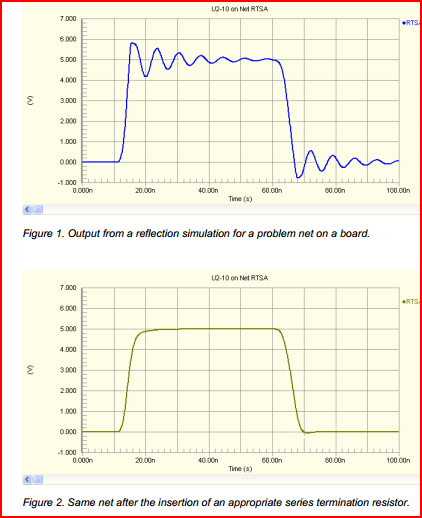 On the logic analyser, both signals may work, but there is no way of knowing how marginal the first signal is without checking with a scope. The incorrectly terminated trace may only cause problems intermittently, so it's important to be able to check it's integrity.

Looking at your link to the DPScope design, I see it's dsPIC based. It won't be comparable to anything you can buy (you can get a 20MHz analogue scope for << £50 nowadays, and a 5-10MHz DSO for similar)
However, it would be a great project for educational purposes, and you will get something perfectly useable for low frequency (e.g. audio, UART, PWM) purposes. Plus you'll have fun building it. If your thinking of doing so, I'd say go for it, just don't expect it to take care of all your debugging needs. If your budget is limited, get a cheap analogue scope - you will generally get the highest bandwidth for your money.
Remember the chicken and egg problem - you need a scope in order to build and test a scope ;-)

A rough rule of thumb is you want about 10 times the bandwidth as the frequency of the digital signal you want to see on a scope. This is assuming you want to see the wave shape, not just when it goes high or low.

Modern scopes have two issues related to bandwidth: The bandwidth of the analog electronics to receive your signal and present it to the internal A/D, and the sample rate of that A/D. Nyquist says you need at least 2x the sample rate of the highest frequency of interest. However, that is the absolute minimum theoretical. In practise you need usually a few times more than that at least.

Sampling aliasing of a scope gets annoying, and sometimes it can give you completely the wrong idea or really confuse you if you're not noticing that's what is happening. A sampling rate 10-20x the highest frequency the scope can handle is usually about right. Keep in mind that 2x is the guaranteed to fail limit. For example, a 60 MHz scope might have a sample rate of 1 GHz or so.

Q Under what situations would it be necessary to have a bandwidth capable of measuring these digital lines as analog signals?

A Debugging phantom errors in the presence of RF noise or EMI such power line transients, ESD events, RF power bursts and last but not least an EMP. Crosstalk is another source of interference and common to bundles of RS232 signals on multi-wire pairs.

So far all the other answers give correct info as well.

External data communication with unshielded twisted pair wires (UTP) is good but insome cases not enough to protect data from transient errors. Shielding can provide 40~60dB of reduction and filtering with magnetics can also reduce common mode noise, but you never eliminate analog noise all together. So it all digital signals are analog with sufficient margin that we treat them perhaps as binary signals most of the time.

A I can list hundreds of communication serials signals that are considered digital that must be scoped as analog; but in general; Disk drives read / write data from heads, Telemetry receiver , I2C signals that fail in a shared access mode, Ethernet signals that cause high error rates, T1 repeaters, all optical data receiver links, DVD error rate debug testing. etc etc. Another is logic "race" conditions in which case a signal changes state just when it is being sampled by a clock.

Q have higher frequencies than those listed above?

A The fastest pulse I have seen is from a human finger discharging 10kV to a door knob. The rise time was 20 pS using an extremely fast scope 20 yrs ago. Plasma arcs arc caused by the tunnelling of electrons in a plasma state created when air breaks down by exceeding its dielectric withstanding voltage of usually 1kV per mm. 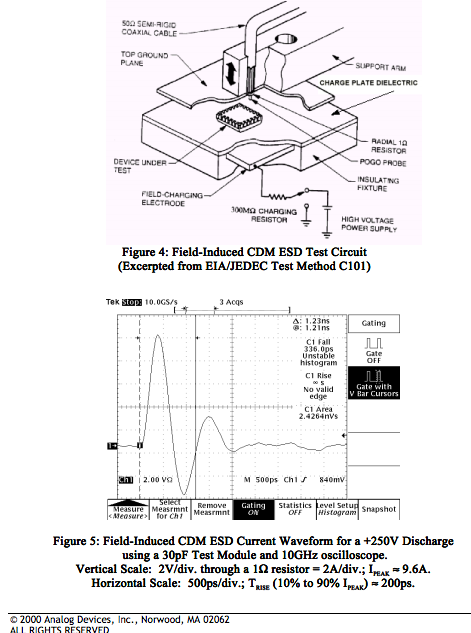 Recent photo from EOS/ESD experts.. still does not have enough bandwidth to capture the event, but is not bad at 336ps rise time.

I propose to you, that all digital signals are analog in nature and to fully understand issues of reliability, you need to understand all the analog equivalent circuits of digital signals. Recent google search just now showed the analog equivalent circuit I discussed in comments of an HDA part of a HDD with EOS discharge model from tribo-electric effect on moving disks under recording heads for magnetic recording.

We all think of disks as digital storage medium. Now neglecting the magnetic properties and just focusing on the OES/ESD properties of pico second discharge pulses, this is the equivalent circuit , some researchers have come up with. I was ware of this model in my mind back in the early 80's when I was Test Engineering Mgr at Burroughs/Unisys and we refurbished about 100 different old peripherals, built new and tested OEM HDD's for systems integration. So we had several Class 100 Clean rooms and many servo writers where we had to resolve these issues, such as the one modelled for Electro-Static-Discharge (ESD) in this photo. 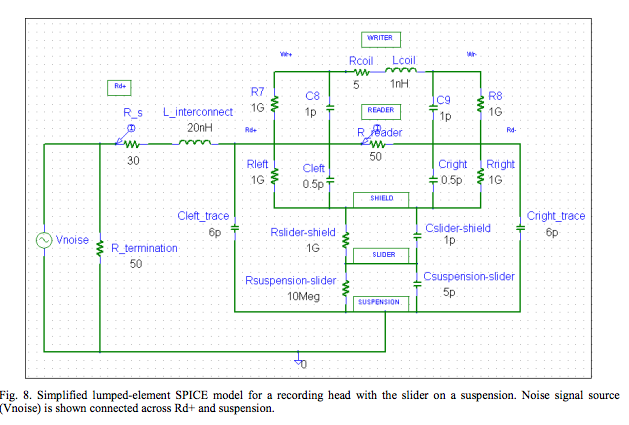 this is old news to me... but a very good article. which reinforces the need for ANALOG SCOPES of digital signals that are very common to everyday life. (ESD)

2
How to halve a frequency with analog circuitry while preserving signal integrity?
1
How can I easily convert an analog signal to a digital signal?
3
Digital vs Analog signal for data transfer across boards
0
Analog signal detection
0
Digital speedometer to analog signal
0
How can I convert a pulsed signal to an analog voltage?
3
How to find the source of a noise in a particular band
1
Frequency Key Shift technique to superpose the digital communication on top of 4–20 mA signals
1
Amplifiying PWM signal to 10v analog
0
Analog Oscilloscope Flickering Signal Problem