I have an APC UPS and one of the caps - an SIEMENS EPCOS 20uF 150V Capacitor - started making a buzzing noise.

This seems to be a AC, non-electrolytic capacitor and most local stores have it priced at ~$20 + tax.

I also realized that caps of similar rating (20uF 250V) are present in the cheap pedestal fans they sell at Walmart! 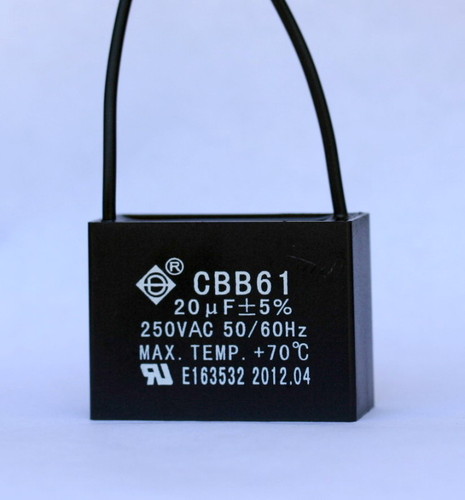 Most importantly, these ones are also available on eBay for ~$5 and are worth a shot, but I had a few questions:

Here are pictures of the board: 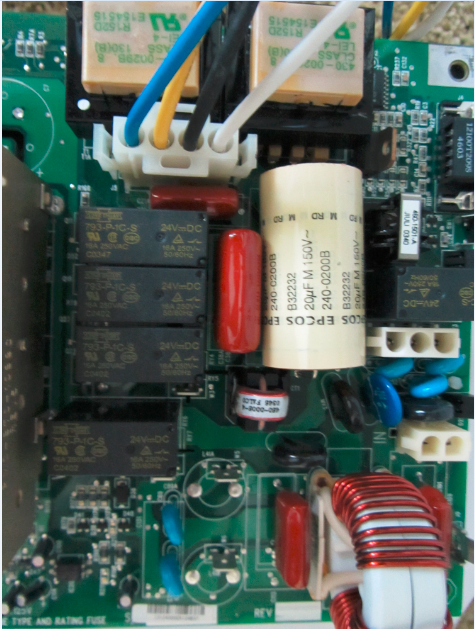 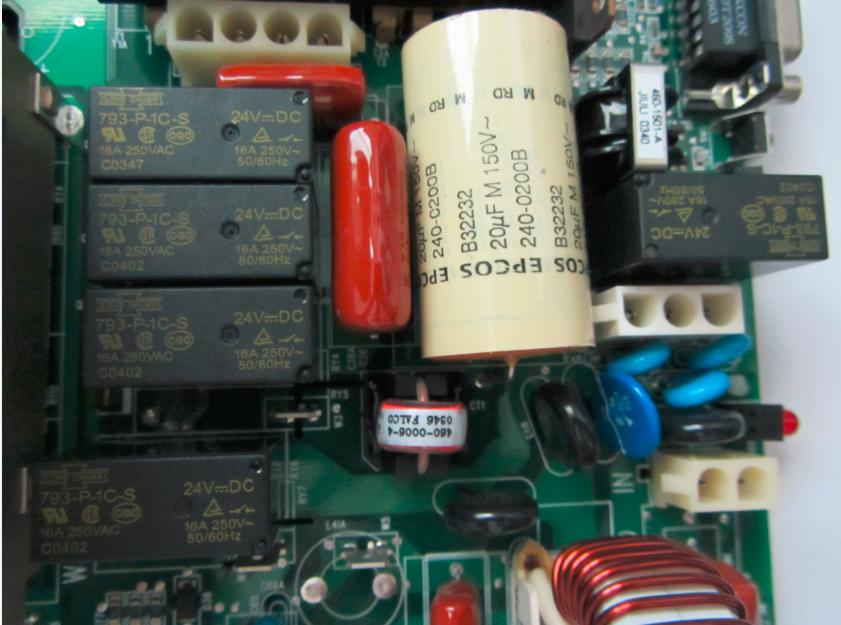 It seems the noise is from the yellow cap, although there is a slight chance it could be from components around it (or because of malfunction of a component that's leading to the noise in the cap?).

This is a YMMV / Caveat Emptor / DTTAH / ACNR type question and answer*:

ie the following may help but you MAY blow things up.

Is the buzzing because of the capacitor is bad or that a different component could be failing and having a secondary, audible effect on the capacitor?

Could be either. Capacitor is possible but I've not heard one do this. You may get a better idea by using a 'sound transfer unit' eg a wooden ruler or length of solid plastic bar or similar. ENSURE it is not electrically conductive to the extent that applying 600 VDC on one end and your ear on the other will not cause "problems" [tm]. You may wish to use a piece of rubber glove on one end as well BUT in practice even touching the capacitor outer SHOULD be safe.
Place one end of STU (sound transfer unit) against object to be tested and other end against ear or bone of head near ear. Sound can be localised and heard much better this way., Try on surrounding objects as well. Applying EHT to far end is to be frowned on - you should not have any EHT in a UPS.

Should not both these caps be interchangeable in this application?

There is a "reasonable chance" that the cheap fan cap WILL work OK here. Also, used or dead fans may be cheaper again.

I am thinking of plugging out the 20uF 250V pedestal fan capacitor and putting this capacitor into such a fan instead, to confirm if the cap itself is causing the noise - sounds like a good idea?

Yes. Sounds good. Always a risk that the fan will stress it worse than the UPS does but if it is good it should work OK.

I am not sure why the fans use 250V caps but my assumption is that these Chinese makers just stock up on one variety of the caps since most of the world are at or below 250V.

Many countries are 230 VAC. Some nominally 220 VAC. Voltages can be and are sometimes higher than nominal. 250 VAC is saying it will work anywhere.

Hence, for this experiment, using a 150V cap instead of the 250V one for the fan (in the US) should not damage either fan or cap?

Probably. Cap MUST be AC rated and suitable for whatever class of service it sees. X rates is phase-phase or phase-neutral or line-line. Y rated is phase-ground. Such ratings allow for surges, spikes etc. 250 VAC cap in 110 VAC system should be fine.

If it's confirmed that the cap's at fault, could I put in the 20uF 250V pedestal fan capacitor on the APC UPS board and expect it to have no detrimental effect on the UPS?

My understanding is that this is a power cap and as long as the capacitance and voltage rating is good, other cap chars like ESR don't matter?

See above re X and Y rated. Also, some designs pass high currents at all times and some don't and a cheap cap may get sadder quicker.

*YMMV / Caveat Emptor / DTTAH / ACNR = Your milage may vary
Let the buyer beware.
Don't try this at home (you can but ...)
All care, no responsibility

I read that the issue with the capacitors APC used is the temp rating is marginaly OK at best. If you replace the capacitor in these APC boxes, go for one rated higher than 70 or 80 degrees.

Not the answer you're looking for? Browse other questions tagged power-supply capacitor repair ups or ask your own question.

2
Capacitor in series and parallel to diagnose APC Smart UPS 1000VA
2
Why are these two same rated metallized film capacitor physically different
2
How does the values of the capacitor affect the filter circuit?
11
Can I use a higher voltage rating when replacing capacitors?
0
Is it normal for the OC2 vacuum tubes to glow bright orange during operation & OA2 to flicker while running?
1
Operating a fan on UPS
3
APC Smart UPS - 2700uF 40V Capacitors
0
Replacing brushless motor (starting) capacitor with one of a higher capacitance
0
How to Calculate UPS Batteries DC to AC Efficiency?