I have this old Nikko Tiger 2 RC car I've been playing around with. At first I disassembled it and played around with the parts and my parts (motor controller++).

But then I asked myself, can't I use the parts already in there? And put the end of the antenna of the RC car (not the remote controller) into my arduino? Making the arduino produce the signal for the various commands (forward, backwards, steering).

Is it possible? The remote controller is a simple, two throttles: up/down and left/right. It states that it operates on 27MHz.

Could I do this in two steps:

1: open up the remotecontroller, plug the antenna to the arduni and record the various commands

2: plug the antenna of the car to the arduino and make the arduino produce the signal for the various commands?

Definitely possible, but you'll need more than the antenna. The remote controller has a 27 MHz RF transmitter, which sends the data to the car. That has an RF receiver, which gets the up/down, left/right data from the RF signal. You need both the transmitter and receiver.

Check the remote controller's electronics. You'll have a PCB to which the antenna is connected. This will have a couple of wires coming from from the battery, and a few coming from your controls. Use a multimeter to see what their signal looks like when you handle the controls. That will probably be simple signals, like 0 V = left, 4.5 V = straight ahead, 9 V = right. Something like that.

Same for the receiver's side. You have power supply, and outputs going to the motor(s) and maybe a solenoid. Measure what comes out when you use the remote controller.

Arduino works at 5 V, and its I/O's can only output 0 V or 5 V. You'll probably need a few components, resistors, and maybe a transistor to create the signals for the transmitter from Arduino. It depends on what the signals look like.

On the receiver side you have more options. Apart from the digital inputs (0 V or 5 V) Arduino has analog inputs, which can detect a range of input voltages. The receiver's output signals will probably be digital as well, though, if they control a motor (on/off, forward/reverse). The voltage level will probably not be 5 V. Again a transistor may adapt the level for the Arduino's 5 V.

If you want to play with wireless a cheap but interesting alternative can be the RFM70: 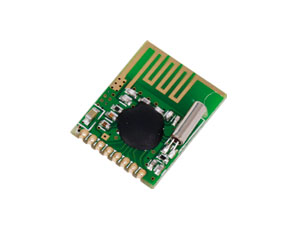 It's a small transceiver module you can directly connect to Arduino to transmit and receive any amount of data you want, so you're not restricted to the couple of controls from your RC. Costs only a few dollars.

Not the answer you're looking for? Browse other questions tagged arduino remote-control or ask your own question.