I am trying to build a half adder using a 74LS86 XOR gate. Initially I connected both input pins that I am using (9 & 10) on the 74LS86 to the ground rail using 10K ohm resistors. I then connected 5V to pin 9 and expected the LED fed from pin 8 to light. No luck. I then pulled pins 9 and 10 high by connecting the 10K ohm resistors to 5V. When I pulled pin 10 low by connecting it to ground, the LED lit. I substituted 330 ohm resistors for the 10K resistors and reconnected them to ground. Now the circuit works properly when I pull either pin 9 or 10 high. Is 330 ohms an appropriate choice? Are pins 9 and 10 sourcing current when they are not active (pulled high)? I read that low power schottky ICs can only source 8mA. I am calculating that with 5V and 330 ohms that the current draw could be 15mA. I am wondering where I should look on the datasheet to properly size pulldown resistor for TTL ICs.

Common practice for switch inputs was to put the switch between the input pin and ground, with a 5K or so resistor to +5V to ensure the input would really be seen as a High when the switch was open.

See below clip of this datasheet:

The final number Iil is the maximum input current when the input is at 400mV, -600uA.

If you just want to use the X-OR gate as an inverter, it's better to just tie the input to GND, of course, as that saves a part and gives you 800mV of noise immunity rather than 400.

Note that in some cases multiple inputs to a gate will source the same current as a single input. For example, the 74LS30 has the circuit shown below:

There is only a single resistor for all the inputs, so the input current is the same for one input low or 8 inputs low.

I will expand on Peter Bennett's answer: Don't use use pulldowns at all.

Instead, use 1k pullups to +5, and ground the input for a low. In other words, 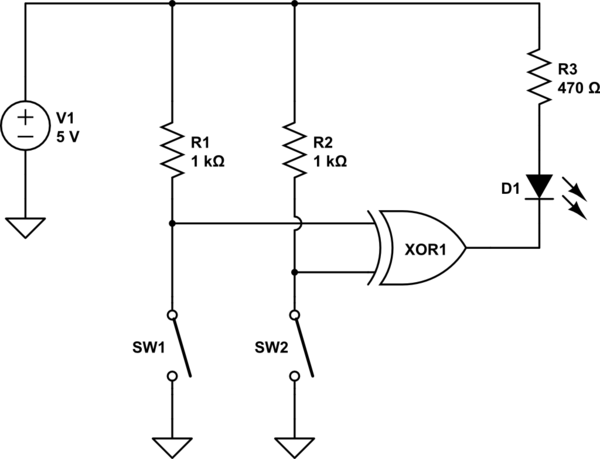 Also note the connection of the LED. As you have realized, TTL works much better as a current sink rather than a source, so go with it. If the polarity inversion (a low output turns the LED on) bothers you, buffer the LED with an inverter such as an LS04, or use another stage of the '86 to do the job.

Not the answer you're looking for? Browse other questions tagged digital-logic resistors pulldown sinking or ask your own question.

6
Sharing a pull-up resistor
8
Pulldown resistor on output pin, how does output still work?
0
Pull down resistor not pulling current down to 0 V? - Arduino + LED's
1
SN74LS74AN trouble
1
Pull-down resistors on 7447 input pins
2
TJA1048 - Can someone check if my calculation is good about pull-up and pull--down
7
Why does 10k ohm pull down resistor not work for pushbutton with NOT logic gate?
0
Pulldown to prevent floating input pins for multiplexer
0
Does this require a larger series resistor?