I am using the Raspberry Pi's GPIO pins to switch transistors in an H-Bridge. This circuit is designed to allow a path to ground that will reverse the polarity of the motor without the wires being physically switched. The circuit operates as intended, however there is quite a significant voltage drop with nearly half the voltage being dropped across the load. I have used LEDS in this schematic to demonstrate the reverse polarity property of the circuit, however the load will be a dc linear actuator. If the LED is replaced with the actuator it adds .7V to the circuit, however this isn't enough. This circuit is sufficient to run the actuator at full battery, however I would like to have it be faster. Another issue, is that when the battery voltage begins to drop this circuit will no longer work due to the voltage drops across the transistors. Is there a way to turn these transistors on without diminishing the batteries voltage? The raspberry pi gpio pins supply 3.3v at the base to turn the transistor on, however it seems that there is a total 1.4 voltage drop from the battery. Is there a way to have this voltage drop come from the raspberry pi, or another way to design this circuit? Any help is appreciated.

The problem with your first circuit is that the bridge transistors are wired in 'Common Emitter' mode. When a transistor is turned on its Base-Emitter junction drops ~0.6V. But the Base voltage cannot go beyond the supply rail so the Emitter cannot get closer to the supply rail than ~0.6V.

Another issue is you don't have a resistor in series with the LEDs to limit current, which will cause excessive current flow and even more voltage drop across the transistors.

Your second circuit is a poor attempt at configuring the bridge transistors in 'Common Emitter' mode. Both upper transistors are permanently turned on, so when a lower transistor is turned on a large current will 'shoot through' both transistors on that side.

To make the circuit work better when driving high current loads you can add driver transistors which invert the upper drive signals rather than using the bridge outputs to do it. Here's one way:-

When In 1 is set high Q2 turns on and connects R1 from the Base of Q1 to the Base of Q4, turning on both both Q1 and Q4. Q5 does the same for the other side.

Diodes D1-4 provide a path for current to flow while the magnetic field is collapsing when an inductive load (eg. motor or solenoid) is turned off. Without these diodes the transistors could get damaged by reverse voltage spikes.

For low Voltage FETs driving motors, you need to select Ro according to the DCR coil resistance and heatsink cooling of the FETs using Ohm's Law.

Generally it turns out that for low voltage motors, you need a FET current rating that is at least 10x the rated motor current with a low Vgs drive. If you had 12V drive, it would operate cooler with lower resistance. 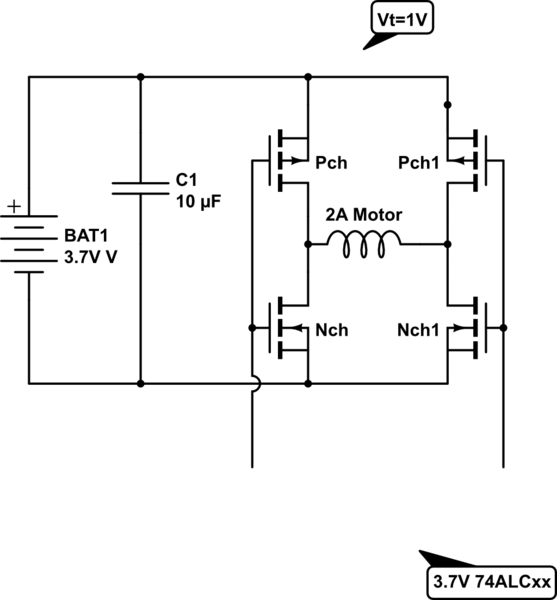 Not the answer you're looking for? Browse other questions tagged transistors bjt raspberry-pi h-bridge gpio or ask your own question.