How do I find out at compile time how much of an STM32's Flash memory and dynamic memory (SRAM) is used up?

I have the answer for Flash memory, but the RAM question still eludes me.

Arduino has this super nice feature which displays flash and RAM usage right at compile time. Ex. in the image below you can see that this Arduino program uses 2084 bytes of flash (6%) and that global and static variables use 188 bytes (9%) of dynamic memory, or SRAM.

When I compile a simple blink program on an STM32F103RB Nucleo dev board in the System Workbench IDE I'd like to know the same thing: how much Flash and RAM is used, and how much is remaining?

But how do I figure out how much SRAM my global and static variables are using, and how much is available for local variables (like Arduino shows)?

I don't have a clue what any of this stuff means yet, but if this is helpful to help you help me, here is the output from objdump -h STM32F103RB_Nucleo.elf:

The information you need is all in the output from size (aka arm-none-eabi-size):

To calculate the RAM usage of your program, add the data and bss columns together.
SRAM = data + bss

To calculate the FLASH usage of your program, add text and data.
FLASH = text + data

If you want a quick Linux bash script to auto-calculate Flash and SRAM usage for you, see my other answer here.

Jump straight down to the "Summary" at the bottom.

@duskwuff -inactive- answered the crux of my question in her/his answer here, but I'd like to add some additional insight and also answer my own follow-up questions I wrote in the comments under his answer.

First off, the "Basic Linker Script Concepts" section of the GNU Linker manual, included in its entirety in my "References" section below, was key to learning this information. Refer to it at the bottom of this answer, below.

For a more-detailed look into some of the aspects of this answer, refer also to my other answer to a related question I asked on Stack Overflow here.

It turns out that the information from objdump -h STM32F103RB_Nucleo.elf contains the same, more-specific output sub-sections as the arm-none-eabi-size -x --format=sysv "STM32F103RB_Nucleo.elf" command, which shows the size output in the sysv format instead of in the default berkeley format.

Here again is the berkeley-format output from the size (arm-none-eabi-size for STM32 mcus) command:

In the objdump -h STM32F103RB_Nucleo.elf output I posted in my question, all the information we need to answer my question is found, just in a much-more-detailed format is all.

As the GNU linker manual explains (see below), VMA means "Virtual Memory Address", and LMA means "Load Memory Address". The VMA addresses are where the data is located at run-time (which could be in volatile SRAM, since some data is copied from Flash to SRAM at boot), and the LMA is where the data is located when the device is off, and also prior to loading at boot (so it must be in non-volatile Flash memory only). Some data will be copied from Flash (LMA address) to SRAM (VMA address) at boot.

Any section marked READONLY, you can see, is stored only in the Flash memory at the 0x08000000-level addresses, and has the same LMA and VMA address. This makes sense, as there's no need to copy it to SRAM if it's read-only. The sections marked READONLY make up the berkeley-format text section. They include:

So, we know that:

0xb50 is decimal 2896, which matches the berkeley size output for the text section! And, again, as shown by the 0x08000000-level addresses for both LMA and VMA, this means all of these sections are in Flash memory only!

Here's my description of what these sections are:

SYSV SECTIONS WHICH MAKE UP THE BERKELEY text SECTION AND WHICH ARE IN FLASH MEMORY ONLY:

Next, we can see that the NON-READONLY sections which also are ALLOC and LOAD sections include:

So, we know that they make up the berkeley data section:

0xc is decimal 12, which matches the berkeley size output for the data section.

I don't know what the .init_array or .fini_array sections mean (if you know, please answer or post a comment), and I'm confused on their location, as their LMA and VMA addresses are identical, indicating they are both in Flash and Flash only. However, it's clear by the addresses of the .data section, that it takes up both Flash memory (at LMA [load address] = 0x08000b58) and SRAM memory (at VMA [run-time address] = 0x20000000). This means this data is copied from Flash to the beginning of SRAM. This happens during the startup routine. .data contains NON-zero-initialized (ie: initialized with something other than zero) static and global variables. In summary:

SYSV SECTIONS WHICH MAKE UP THE BERKELEY data SECTION AND WHICH ARE IN BOTH FLASH AND SRAM, AND WHICH ARE COPIED FROM FLASH TO SRAM DURING STARTUP:

SYSV SECTIONS WHICH MAKE UP THE BERKELEY data SECTION AND WHICH APPARENTLY ARE IN FLASH MEMORY ONLY?:

That leaves us with just these sections marked with ALLOC and nothing else remaining:

So, we know they make up the berkeley bss section:

0x634 is decimal 1588, which matches the berkeley size output for the bss section.

This is really interesting!, as it shows that the berkeley bss section doesn't just include the .bss (zero-initialized static and global variables) output section, but it also includes the ._user_heap_stack output section, which is perhaps (or rather, appears to me to be) the heap size we specify inside the STM32Cube configuration software. In either case, it appears to be the SRAM set aside for both the runtime stack (for local variables) and heap (for dynamically-allocated memory). In summary:

SYSV SECTIONS WHICH MAKE UP THE BERKELEY bss SECTION AND WHICH TAKE UP SPACE IN SRAM ONLY, BUT NOT FLASH:

In the below image, you can see all 3 berkely output sections boxed in different colors: 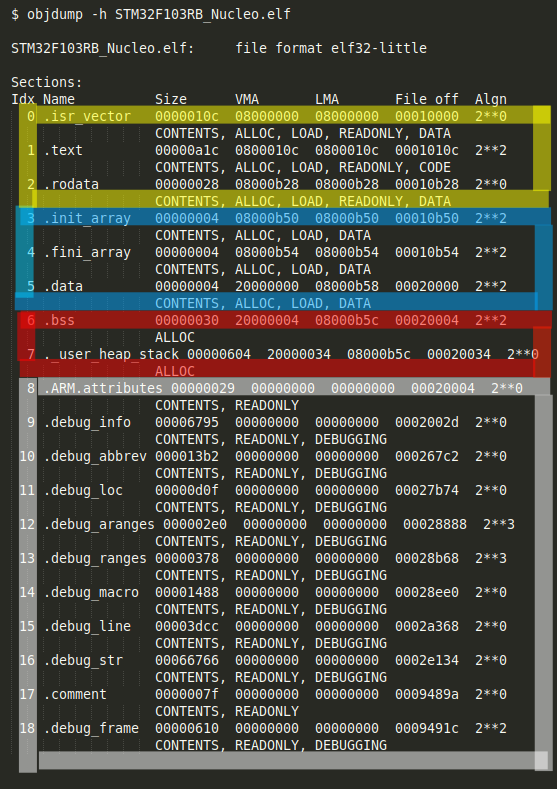 Script/command to auto-calculate Flash and SRAM usage for you

As an extension of the other two answers, including my own, here is a 1-line Linux bash script you can use to automatically calculate FLASH and SRAM used.

Anyway, here is the script:

...here is a sample output of running the above script:

Breakdown of Flash, SRAM, and the 3 Berkely sections

For more details see my other, very detailed, answer here: How do I find out at compile time how much of an STM32's Flash memory and dynamic memory (SRAM) is used up?

Not the answer you're looking for? Browse other questions tagged microcontroller stm32 memory flash ram or ask your own question.