If single phase supply can not create rotating MMF, how does Induction motor generate torque?

I do understand that in a Three phase Motor, a rotating magnetic field is produced in stator and the induced magnetic field in rotor tries to aligns itself with the stator field which makes the rotor rotate.

But in case of a single phase supply, there is only a pulsating stator field. So to start the motor, an auxiliary winding is used which has a field that lags the main field by 90 degrees. 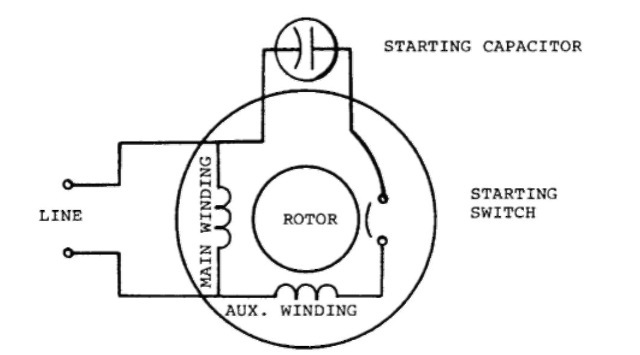 The stator magnetic flux can be visualized and mathematically described as two flux waves rotating in opposite directions. Because of the shape of the torque vs. speed curves and the effects of the rotor magnetic flux, once a direction of motion has been established, the forward torque is higher than the reverse torque as shown below. The solid line is the sum of the forward and reverse torques. 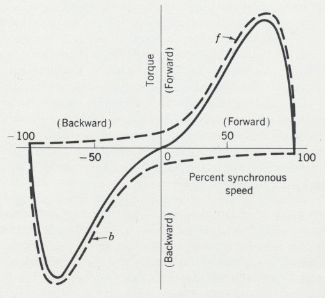 The above illustration is taken from Fitzgerald, Kingsley Umans, Electric Machinery 4th ed and the paragraph above is a summary of a 1-1/2 page explanation in that text. Also in that text, reference is made to another text for "an extensive treatment of fractional-horsepower motors."

The torque produced by the forward-rotating magnetic fields is higher than for the reverse because of the shape of the curves. The torque vs. speed characteristics can be determined by analyzing the equivalent circuit of the motor. That circuit for a single phase motor that has been started is shown below. A more complex version of the circuit may be required for an accurate determination of the characteristics. 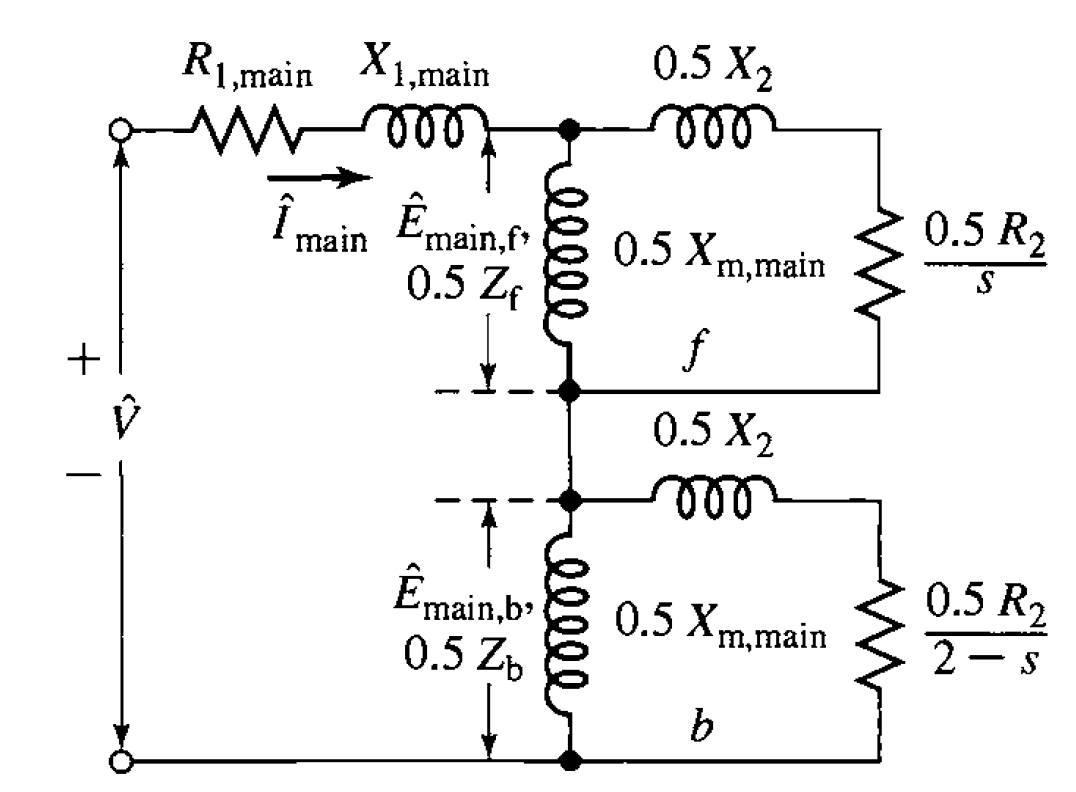 A single-phase motor has two stator windings with different resistances and inductances or with a series capacitor in series with one of them. Split-phase motors have a phase displacement between the currents main and auxiliary windings. That creates an approximation of a two-phase motor. An analysis of a split-phase motor still makes use of the theory of two revolving fields. Another concept that is used is the symmetrical-component concept. Each of the two concepts has advantages and disadvantages.

It's a bit like being on a swing. Once you get it going you only need to "push it" at the right time each cycle to keep it swinging.

The same goes for a single phase motor. Once the starter coil gets it going, the "pushes" from the AC power keep it circling in phase with the power supplied with a lag appropriate to the torque taken by the motor.

Too much torque and it will cause the lag to reach a point where the push is at the wrong point in the cycle and will stall the motor if it does not include a restart mechanism.

Also, despite what is often depicted in textbooks, if you look at the rotor cage of an induction motor you will see that the orientation of the rotor bars is skewed / slanted. This is so that the magnetic fields around the rotor bars are in constant contact with fields in the stator and the torque pulsations are minimized.

In larger 3 phase motors that is generally not necessary because the mass of the rotor carries it through will little pulsation, so the the rotor bars are often straight.

This problem is not unique to electric motors. Steam engines had this problem and some locomotives would, if they started the wrong way, have to reversed quickly by the drive to run in the intended direction. (Controls were probably marked "One way" and "The other way" rather than forward and reverse.

Bicycles are also, in effect, single phase with a weak forward / reverse thrust available from the rider's legs. Most of the force available is vertical.

The trick in both of the above and in the case of the induction motor is to get the cycle started somehow, let the momentum carry you over top-dead-centre and then push hard.

Once the motor begins rotating (with the aid of the capacitor and extra winding), it's purely inertia that keeps it rotating under mechanical loads and if the load is too big it will stall the motor and it will remain stalled even if the mechanical loading is removed.

If the "starting switch" is automatically reactivated upon speed being below a certain threshold, it will re-start.

It's like a bridge rectifier circuit and reservoir capacitor - the capacitor only gets charged for a short period each cycle and in between charging events, it's effectively free-wheeling. The load reduces the capacitor voltage until along comes another charging event. This isn't a problem and it doesn't have to be a problem for the motor under light (ish) mechanical loads.

Yes.. A single phase induction motor is not an self-starting motor. But however when the rotor is given an initial rotation in any direction it continues to rotate in that direction. Therefore an external requirement must be provided to the motor in order to start it. But a motor should be designed such that it is able to start its own.

That's a good question. It relies on the rotor retaining the flux through itself between 1/2 cycles (like a shorted inductor), so after it passes a pole & the pole changes polarity, it is then repelled and attracted to the next pole like the permanent magnet in a synchronous motor, but with slip. If the rotor resistance is too high, it will not keep running, like the capacitor run motors in chart recorders. They were optimised for maximum torque with minimum current at near standstill. The start winding was permanently connected and the run winding fed from a chopper amplifier. The incoming +- DC signal was chopped into +- phase AC with a chopper relay, amplified & fed to the run winding. If you disconnected the start winding, the motor would coast to a stop. The rotor resistance was so high that the the flux decayed straight away and the rotor was repelled & attracted pretty much equally in both directions. It needed a rotating field to follow.

Not the answer you're looking for? Browse other questions tagged motor ac induction-motor or ask your own question.

1
How is a higher torque achieved in a single phase cap-start cap-run motor?