Does using electronics with poor power factor affect the pulse power capability of a generator rated for a certain KVA?

The situation is such:

There is a multi-pole, three-phase, permanent magnet generator (rated for 100 KVA, let's say) that feeds into a simple diode rectifier with a capacitive/DC Voltage load (something like a battery). 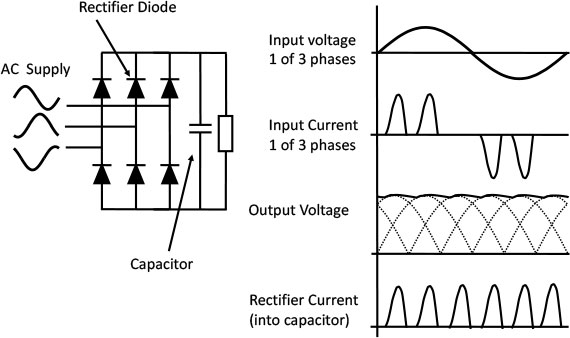 Without any active correction, the power factor of this circuitry is going to be pretty poor (maybe down around 0.5).

The time that you can safely "overload" the generator depends on the time and amount of additional heating. Only the generator manufacturer can tell you.

Perhaps it would help to understand what a poor power factor actually is, and what happens in the wires.

If you have a device with a power factor of 0.8, it means that during each AC cycle, it is only using 80% of the power it takes in, with the remaining 20% being sent back to the source at some point during that same AC cycle.

This means an 80 kW device will draw 100 KVA, but then return 20 KVA back to the generator, each cycle. It averages out at 80 kW (with 0.8 PF) but it is measured as 100 KVA as that is the peak power draw, and it means you need to deliver 100 KVA to run this 80 kW device, even though 20 KVA of it is only "borrowed" and returned almost immediately.

As COVID-19 is currently in progress, an analogy would be that a person goes shopping and buys 100 toilet rolls, then takes them home and realises that they only have enough space to fit 80 rolls. The surplus 20 rolls get returned to the shop, but the shop can't resell them for hygiene reasons so has to throw them out. Thus the toilet paper factory had to produce 100 toilet rolls (100 KVA) even though the person only ended up using 80 rolls (80 kW). This person has a toilet paper factor (TPF) of 0.8.

So when you say can you ever get 100 kW out of the generator with a poor power factor, well the answer is you already are, but your device then takes some of that power and sends it back to the generator every cycle - two steps forward and one step back, so to speak. You are asking whether the toilet paper hoarder can ever get 100 toilet paper rolls from the shop, but that's already happening, it's just that some of them always get returned unused.

The generator probably doesn't know what to do with this returned power - it has just generated and sent out 100 KVA and suddenly 20 KVA is coming back in again, but it doesn't have any way of storing that power to send it back on the next cycle.

I am not 100% sure what actually happens inside a generator - probably it will momentarily switch to a motor with that incoming power, causing the rotation speed to increase, which then has to be compensated to avoid going out of the 50/60 Hz range. But moments later the load is back, so the generator may run rough, have increased vibration, etc. With inverters, the returned energy will typically be disposed of as waste heat (making the inverter run hotter and wasting power), which is why inverters have both a kW and a KVA rating. The difference between the two figures is how much energy they can dispose of without overheating, due to powering devices with poor power factors.

I said above that the generator has no way of storing the power that gets returned to it in each cycle, but you may have thought that something like a capacitor could be used to store this energy. This is indeed possible, and it's why inductive devices like motors can use capacitors to improve their power factor. The trick is that the required capacitance varies depending on the load, which is why "active power factor correction" circuits exist. These are usually designed to work on the appliance end rather than the generator end however, because you want the power lines between the generator and the appliance to also have an improved power factor - otherwise they transmit less overall power, if a chunk of the power they send out is returned back again (just like all those trucks delivering toilet rolls that end up being returned and thrown away). Whether it's electricity or trucks full of toilet paper, it's better to send out only what will be used, instead of sending more trucks (using larger wires) to deliver things that will end up being returned unused.

Hopefully from this you can see that if you want to run your poor power factor motor at 100 kW (without correcting its power factor), then you're going to have to run your generator past its spec. If the power factor is 0.8, then 100 kW divided by 0.8 gives you 125 KVA. This means you'd have to run your 100 KVA generator at 125 KVA in order to get the motor running at 100 kW (complete with 25 KVA being returned unused due to the poor power factor). Running the generator at 25% over its maximum rating is going to produce more heat than it is designed to cope with, so while it will work for a short while while it's cold and warming up, if you leave it running too long without extra cooling, it will overheat. Not to mention that the wires/cables/windings etc. are now probably a little too thin for the larger amount of power, so even more of it will be lost as heat due to wire resistance, which might mean you have to push the generator up to say 130 KVA to run your load at 100 kW. And then figure out how to get rid of 30 KVA (30 kW) of heat so the generator doesn't get cooked.

Not the answer you're looking for? Browse other questions tagged generator three-phase bridge-rectifier power-factor-correction or ask your own question.

3
What is the current limit on each phase of a 160 kVA three-phase UPS?
5
What is the slip factor for an induction generator in an island network?
2
Power factor correction for LED lighting on a generator
2
How does the speed of a synchronous generator changes with load?
0
How to think about Power Factor when adding new devices to a generator
2
Transformer Sizing with Mixed Loads (Three-Phase & Single-Phase)
0
Single phase vs 3 phase generator
0
ICE-electric transmission drivetrain parameters
1
Help understand 3-phase generator load in amps in a mixed single and 3-phase grid
6
Need device with poor power factor