Is transistor in cutoff?

In the following circuit, consider the op-amp to be ideal (gain = ∞ , input resistance = ∞) and transistor beta is 20 A/A 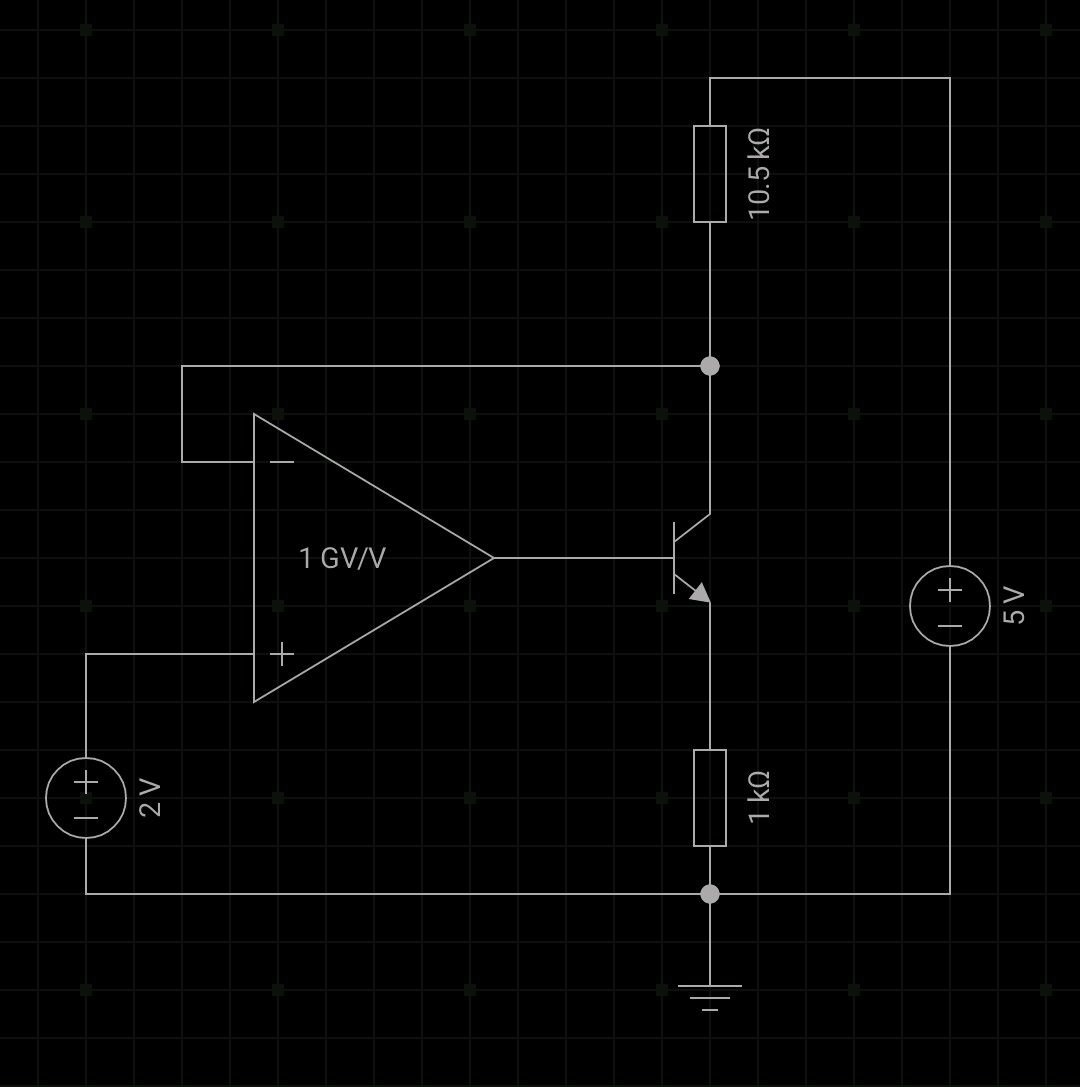 Initially I was using virtual ground concept here but in the given answer transistor is in cutoff so voltage at -ve terminal is 5V. Is this circuit providing -ve feedback to the op amp or not. How can it be cutoff? We have to find current throug 1kΩ resistor and voltage at collector. My answer : 300 uA Given answer : 0A

doesn't make much sense. Due to the positive feedback, it has two possible stable states.

In one stable state, the transistor is fully off. That means the negative input of the opamp is at 5 V. Since the positive input is always at 2 V, this drives the opamp output as low as it can go. Since you said to analyze like the opamp were ideal, that means the output will go to 0. This holds the transistor off. This state is therefore indeed stable.

The other possible stable state is when the opamp negative input is below 2 V. That would drive the output high, which would keep the transistor on. However, with this being a ideal opamp, the output would go to the positive supply. You haven't said what that is, so I'll assume it's the same 5 V the rest of the circuit is being powered with. With 5 V on the base, the emitter would be about 4.3 V, and 4.3 mA would flow thru the bottom resistor (Argh, no component designators). That would generate 4.5 V across the top resistor, which clearly isn't possible due to the voltage drops not adding to 5 V.

Let's say the transistor can go down to 200 mV C-E when driven with enough base current. That leaves 4.8 V across the two resistors. Since the transistor has a gain of 20, the emitter current will be 5% more than the collector current. The voltage drops across the two resistors will therefore be equal, which means they are 2.4 V each. That means the collector voltage will be 2.6 V. That's above the 2 V the positive input is fixed at, so the circuit would quickly latch into the first stable state if it ever got to the transistor full on state.

If the base were driven higher anyway, then the B-C junction would be forward biased, and the collector voltage still would not be below 2 V. The opamp output slammed high is therefore not a stable state. This circuit would therefore always end up in the only stable state there is, which is the output slammed low.

So yes, the transistor is always off.

I just realized that I misread the top resistor as 1.05 kΩ when it is actually 10.5 kΩ. However, that does still not make the second possible stable state stable.

In the second possible stable state, the opamp output is slammed high. This is a ideal opamp, so that means its output will be 5 V (assuming 5 V is also powering the opamp as stated before). With 5 V on the base, the collector of the transistor can't go below about 4.3 V since it would then be forward biased and act as a diode. The negative input would be well above 2 V, so the output would be slammed low and the circuit would latch that way.

Now we actually have negative feedback because the B-C junction acts like a diode. This is therefore a stable state, but not one where there transistor is used in a normal way, or where its datasheet parameters are much guidance.

So now the answer is that there are two possible answers, depending on which state the circuit gets stuck in. In the first, the transistor is always off. In the second, it's B-C junction is forward biased, so it being in "cutoff" or not is no longer a meaningful question.

Your calculated numbers appear correct according to CircuitLab. 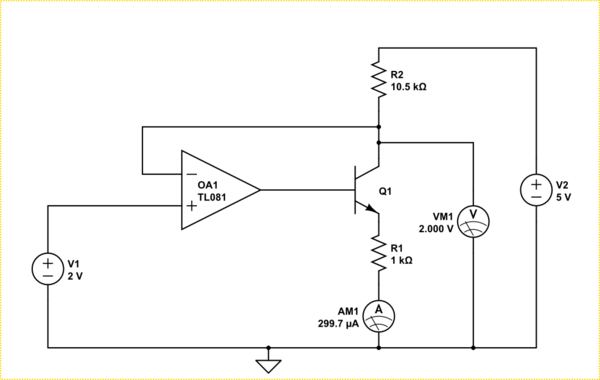 But I would not trust that.

However, in LTSPICE I can only get it to do work by slowing down the 5V supply so it happens in the right order. Then the transistor is saturated on and the collector follows the emitter voltage with ~2mA emitter current.

As such the collector voltage rises with the base voltage, and vica-versa. Since the transistor is no longer inverting, the feedback on the op-amp in your circuit is effectively negative.

Also, because of the magic property of transistors that gives you a Vce-SAT that is less than Vbe you are in the mode where Vc < Vb so the base collector junction is forward biased...

The circuit effectively becomes this.... 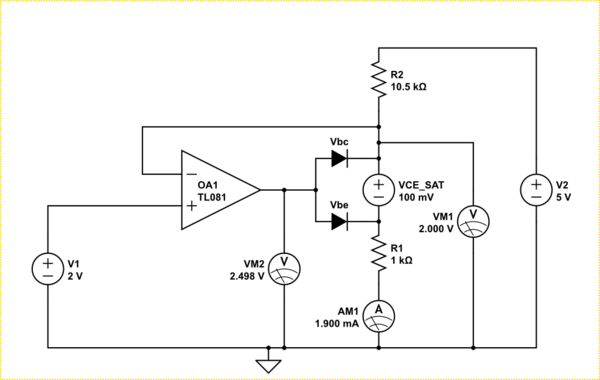 Anyhow... it's a bad circuit. As OLIN points out it is really using the transistor in a bizarre way.

So to answer your actual question..

Is the transistor cut-off?

It depends on when the 5V came up.

If it came up last the transistor may be saturated,

If it came up first the transistor will be off.

If it came up somewhere in the middle... flip a coin!

I decided to change my comment into an answer to cover all bases and make people who are answering the same question different ways see the other's school of thought.

Since we are in the in the completely ideal and infinitesimally fast world, the final answer is undefined unless we specify initial conditions of all nodes.

The truly deciding initial condition is whether the inverting-input's voltage is initially above 2V, or less than 2V, or equal to 2V.

In this case, the output of the OpAmp is railed low and the BJT is off and will never turn on.

In this case, the output of the opamp is railed High and the BJT is on and will stabilize around 300uA to keep the inverting input at 2V.

In this case, the initial condition of the output of the Opamp dictates where the circuit will stabilize. If the output of the Opamp is high enough that the BJT is instantaneously conducting 300uA or more, then we stabilize at 2V at the inverting input. If the Opamp output is lower than required to get about 300uA, then we will have voltage rise at the inverting input which will result in railing to 5V and causing the BJT to be off.

The design is incorrect, with inverting BJT feedback, the +/- inputs MUST be reversed. 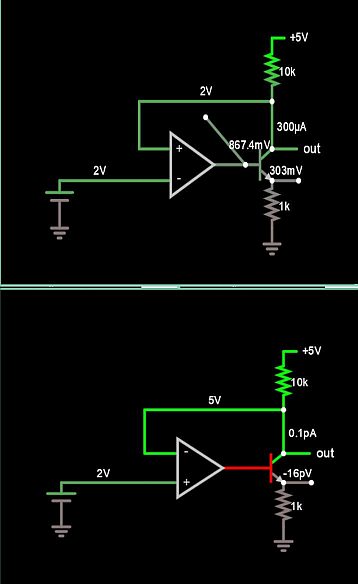 With the inverting input initially at 5V, the output of the opamp is negative, and the transistor is in cutoff.

Not the answer you're looking for? Browse other questions tagged bjt feedback operational-amplifier negative-feedback or ask your own question.