Here is a version of differential pair: 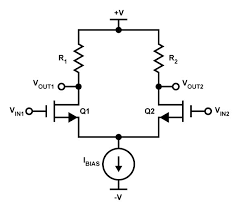 I can understand the working principle of differential pair above. When Ic1 increases Ic2 decreases that's the thing. And for that to happen the tail current must be constant. And the above differential pair example is using current source at the tail which makes this idea work. But have a look at below: 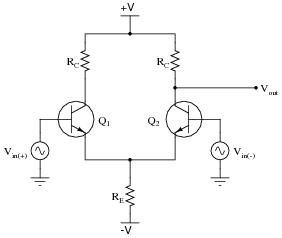 In the above version there's no current source but just a resistor at the tail. How is the tail current kept constant by that resistor Re? Or am I misunderstanding something here?

Finally after reading τεκ's answer I started to understand. Below is an example how we can replace a "voltage source in series with a resistor" with a "current source in parallel with the same resistor". I added disturbance to see how much the current is regulated. I and II shows that source transformation which was the keyword to make things sense. Black plot of the current for I and II is identical which proves this. In III I've increased the source impedance of that equivalent current source and that shows us that moving to an ideal current source makes the current variation much smaller as shown in the red plot. 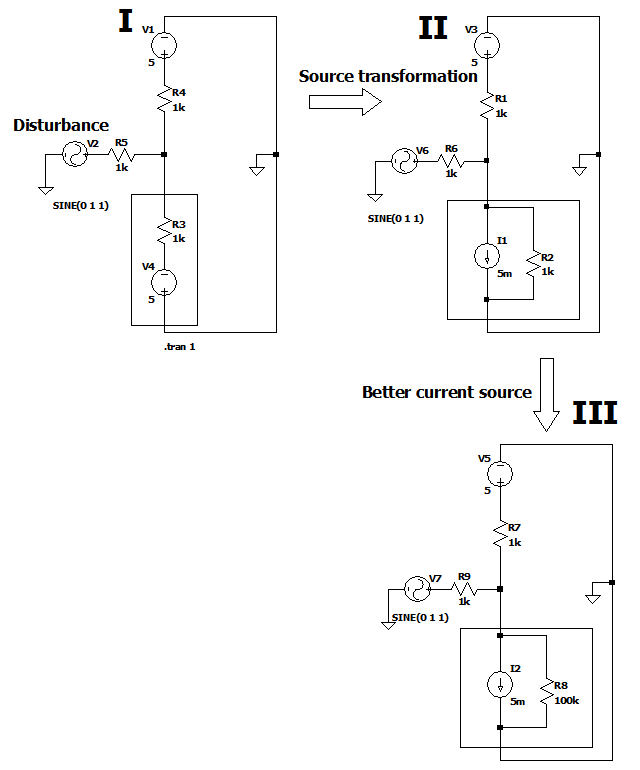 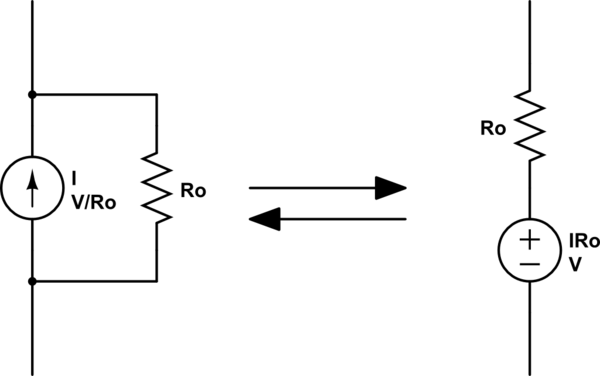 So the long-tail resistor in your circuit is just a non-ideal current source.

If the magnitude of V- is much more than the of Vin range, then the current is fairly constant indeed.

There is a common mode gain, RC/2RE, but it's much smaller than the differential gain, RC/2(Qx intrinsic Re), and for many purposes, this degree of CMRR is sufficient.

You'll notice there's no resistor used between Q1/2 emitters to reduce the differential gain, so this gain stays very high. Where this degeneration is used, the CMRR is much less, and a current source may be used in the tail to increase it again.

First of all, the 'tail' resistor is a current sink, not a source. No need to get into semantics over this.

In many low cost designs resistors are used with the understanding that they limit dynamic range by not regulating the current, which also limits the working voltage range. The constant current sink you saw in the first version is typical of op-amps and other IC's where it is easy to implement current sources and sinks all over the place. Being on the same die helps a lot to avoid temperature drift and external noise. A medium value resistor in the 10K to 50K is treated as if it were a current sink, because so little current flows to begin with. It cannot be more than the sum of Q1 current and Q2 current.

However, for boards made with discrete parts it becomes a tyranny of numbers, because each source or sink must be made with temperature stable parts. Special 5 pin dual transistors can be used as differential inputs or current mirrors, but it starts to consume space and drives up the cost.

Yes there are amplifiers made by Crown and Cerwin Vega that are built like that, but they are thousands of dollars each, just to get a 70V/uS slew rate and 130dB dynamic range, for 500 to 5,000 watts.

It comes down to cost vs. required or mandated performance. In IC's it is easy to just lithograph all the extra goodies that make an excellent op-amp or other analog IC.

Note that many RF IC's in the GHZ range avoid current sinks or sources as they have more capacitive loading then a resistor, but they usually consume more current than audio IC's or slow micro-power IC's.

The emitter resistor behaves approximately like a current source provided the base emitter resistance is much smaller and that you only consider the small signal model. Forget about the differential pair for now and consider the common emitter amplifier. 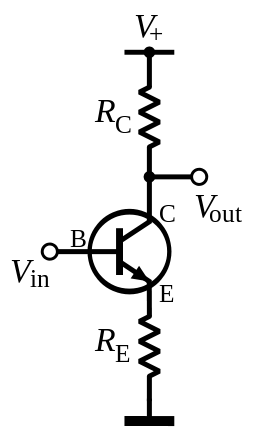 A few days ago I decided to see what happens in the forum... and I came across this question. It seemed simple... but actually, the whole philosophy of the differential pair was hidden behind its answer.

Obviously, the HelpMee's “naive” question (persistently repeated several times) is about the nature of the “tail” - he/she wants to know WHAT, HOW and WHY is done there. I perfectly know the answer… but how do I explain it in the possibly simplest way?

OK, let’s start with a short answer: The differential pair consists of two emitter followers connected in parallel to a common load Re so that each of them tries to make the common emitter voltage equal to its input voltage.

At differential mode, they oppose each other by changing their currents in different directions so both voltage across and current through Re stay constant. In this case, the humble resistor does a good job. It should be resistor (not an inductor or something else) to set the common emitter current according to Ohm's law. This current stays constant; only the partial collector currents change (crossfade, redistribute or are steered). We take one of them, convert to voltage by the corresponding collector resistor and use as a single-ended output.

At common mode, the two emitter followers contribute each other by changing their currents in the same direction. As a result, the common voltage across Re and current through Re, partial collector current and output voltage change as well… which is undesirable. To suppress these current variations, we can make Re dynamic. Then when the emitter voltage increases, the Re resistance increases with the same extent and v.v. By this trick we artificially keep constant the ratio Ve/Re in Ohm's law, which is the common emitter current Ie.

See also this RG discussion - Can we reveal the basic idea behind the long-tailed pair and explain its operation in an intuitive way?

(Another clever trick would be to leave the constant ohmic resistor and make Vee variable. When the emitter voltage increases, the Vee magnitude decreases with the same extent and v.v. Thus we artificially keep constant both the voltage across Re - the numerator in Ohm's law, and common current Ie. See the RG discussion Are there situations in which the common emitter current source of the long-tailed pair can be replaced with a humble resistor?)

Now I will answer the question in detail as HelpMee's wants (and I like) - using “an analytic step by step explanation”. I will do it as a fictional story about the invention of the “long-tailed pair”. I will refrain from using special terms that discourage understanding.

1. Single common-emitter amplifier. In this configuration, we apply the input voltage to the transistor base and take the collector current (converted to voltage by the collector resistor) as an output signal. We can change the gain by inserting various “things” with different (differential) resistance dRe between the emitter and ground. Thus the stage acts as an emitter follower loaded with some “load”... but surprisingly, we do not use the voltage drop across this load as an output… instead we use the collector current that creates this voltage drop. Here are three typical cases:

dRe = 0. If we insert a voltage source, voltage stabilizing element (e.g. Zener diode)... or simply ground the emitter, the emitter voltage will be fixed. Figuratively speaking, the emitter is “stiff”, “immovable”. The whole input voltage is applied to the base-emitter junction and the gain is maximum.

dRe = Re. If we insert an ordinary ohmic resistor with static resistance Re, the emitter voltage will begin “moving” in the same direction as the input voltage. Now the emitter is “soft”, “movable”. A part of the input voltage is compensated and the gain is decreased (as they say, there is a negative feedback or emitter degeneration).

dRe -> infinity. If we insert a current source, or more likely, current stabilizing element (usually, a collector-emitter junction of a transistor), the emitter will become extremely “soft” and will exactly follow the input voltage at the base. As a result, the input voltage is fully compensated and the gain is zero.

The conclusion is that we can increase the gain by “hardening” the common emitter voltage and decrease it by “loosening” this voltage. This trick will lead us to the differential pair...

We can do this magic by connecting their emitters to a common current stabilizing resistor (“current source” or a resistor in the simplest case). Now, at differential mode, each of them will fix the other emitter voltage thus providing maximum gain (the other transistor will have the “feeling” that a voltage source is connected in its emitter). At common-mode, both will work on a common current-stabilizing load that provides a minimum gain (both transistors will have the “feeling” that a current source is connected in their emitters).

See also my answer to the question Why the common-mode gain of the differential pair is almost zero?

"How is the tail current kept constant by that resistor Re?"

No - it cannot be kept constant. However, the total current change can be kept very low. Just imagine that the long-tailed pair is excited with a small signal voltage Vin(+) only (Unsymmetrical operation with Vin-=0). In this case, the diff. amplifier can be seen as a common collector-common base series connection.

Now, let`s write down the collector current changes in both transistors, caused by Vin(+). Of course, Ic1=Ic2 with gm1=gm2=gm.

Here the diff. resistance re is the effective dynamic resistance at the emitter node (with the input resistance 1/gm of T2): re=(1/gm)||RE.

Solving this, we see that this equality is possible for re=1/gm only.

Comment: Therefore, of course both current variations will NOT cancel each other for a finite value of RE. This effect is expressed using the term "Common mode gain" (which is not zero for a finite RE).

Not the answer you're looking for? Browse other questions tagged amplifier current-source differential or ask your own question.