I have 3 LEDs which I assume are white (they look white, in a blue glass/plastic).

I need to power them, but Im a bit rusty with my electrical knowledge.

I have the following power supplies (all 240v mains input):

What would be best suited to powering the LEDs? And what extra stuff would I need (e.g. resistors)?

The LEDs are from ozstick (the LED buttons), which says "colored 12v LED". 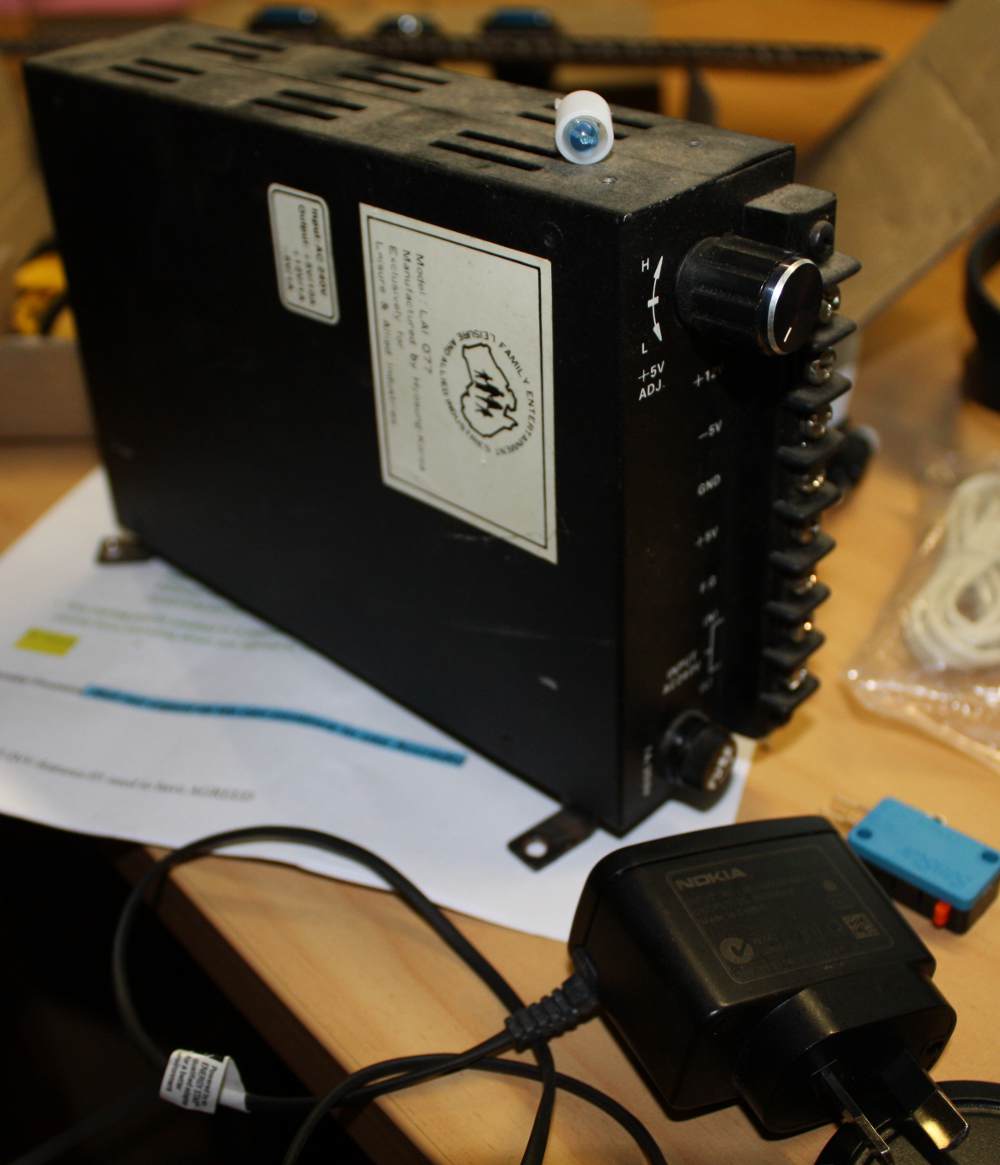 White LEDs need a voltage of about 3 V to 3.2 V, YMMV. You place a series resistor to control the LED's current. A 0.5 V drop across the resistor will not give you good control, I'd rather go for at least a volt. So if you place the LEDs in parallel you'll need 4.5 V minimum. For parallel LEDs place one series resistor for each of them.

If your power supply can deliver a higher voltage you can l=place the LEDs in series. Then they will need 9V to 9.6 V, or thereabout. Again a series resistor for at least 1 V drop, and you come up close to 12 V.

To calculate the value of the series resistor you need the LED's current requirement. Suppose this is 20 mA, then for the 12 V supply with the 3 LEDs in series you need

If the LEDs' voltage is somewhat lower you'll have a higher current: 25 mA at 3.0 V LEDs.

Again, at 3 V per LED you'll get a higher current: 22 mA. Note that the difference in current is smaller, which is because voltage tolerance compared with the resistor's voltage drop is smaller. That's why a minimum voltage drop of 1 V to 2 V is recommended.

edit
You added a link to the product, which says "coloured 12V LED". There are no 12 V LEDs. So this is either a LED with the required series resistor built-in, or an incandescent bulb. In the former case you can probably simply apply 12 V to it, as the site also suggests for the replacement LED. I'd love to have seen a polarity indication on it though.

If these are 12V LEDs you can use the 320W PSU (12V line is the yellow one from four pin connectors, short the green and gray wires in 20 pin connector to turn the PSU on).

Those that seek answers need to verify the source of information given. Likewise to those that give answers.

After reading your link in the question, it is clear, the correct answer is already given and I recognize these as common commercial parts.

> They are also fitted with a COLOURED 12v LED for illumination, which can be connected to an appropriate power supply without any modification.

This means any 12Vdc source. with + - leads on light