Confusion between Class B and Class AB Amplifier

I am reading about output stages of an amplifier and classes of amplifier. The following circuit is named as "Class B" amplifier. 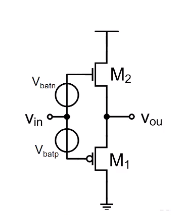 From my understanding, the above circuit should be a class AB amplifier. Because we have a constant biasing, so both transistors would be slightly ON even if the signal is OFF, giving rise to small quiscient current. The crossover distortion is reduced greatly. But I am not sure why in my notes, they regard it as a class B amplifier.

I understand that if we adjust the battery voltage vbatn and vbatp, then would it become a class AB amplifier.

And I am not sure how the following circuit is regarded as Class C source follower: (This below circuit is actually class B from my understanding) 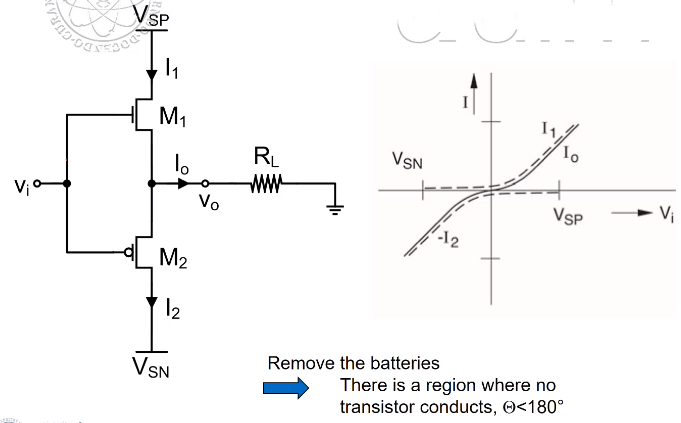 So, could we operate the circuit in class B or class AB or class C? Are class B,AB,C are terms for "Operation"?

f anybody could assist on the above, it would be helpful.

The classes were originally arranged to describe the conduction angle for a single quadrant of a power amplifier.

The above pretty much covered all the cases (except for exactly \$0^\circ\$, which is trivial and no one cares about.)

But the above applied to a single quadrant. (Back when, for radio transmitters, a linear amplifier would have ONE really big vacuum tube for the power stage and you often operated it class-C.)

Now consider the case where you can afford the cost of two quadrants and you have an active push-pull drive capability. The above ideas still apply, but they apply ONLY to one of the quadrants. (On the assumption that both quadrants are operated in the same class as the other one.)

In your lower diagram, the biasing is insufficient to allow either quadrant to operate in class-B, class-AB, or class-A. So the quadrants must be operating in class-C.

Class-AB, as it is often used in the context of push-pull, two-quadrant power output stages is usually meant to imply "slightly more than \$180^\circ\$" for each quadrant. The two-quadrant power output stage is operated this way with transistors to provide a little bit of overlapping coverage during the short transition "shoot-through" angle as the transistor of one quadrant takes over and the other quadrant backs off. This reduces cross-over distortion at the expense of wasted power due to a very short range of shoot-through angles.

It is all about the conduction angle for one quadrant.

Class A = both transistors are ON all the time.

Class B = either one transistor or the other is ON, but not both. The transistor that is ON is determined by output current polarity.

Class C = either one transistor is ON, or the other is ON, or both are OFF. ie, during part of the cycle they are both OFF and no output current flows. This can be used if the load is a tuned circuit (which is excited by the fundamental and rejects harmonics) or a motor, a solenoid, etc. Using this mode is intentional, the goal is high efficiency. The term "class C" also applies to a single transistor power amplifier if the transistor conducts for less than half (180°) of the cycle.

Note that class B doesn't actually exist. Since transistors threshold voltages vary with process and temperature, in practice you will never be able to adjust the bias voltages accurately enough to get class B. You will either get class AB if the gate bias is a bit high, and some conduction overlap will occurs, or if the gate bias is a bit low you will get class C when both transistors are off during part of the cycle.

Additionally when one considers a transistor to be "off" is a bit debatable, is it off when current is 1mA? or 1µA? or the leakage current? Or a negligible current relative to the output current?...

Anyway. The last schematic (without voltage sources to bias the gates) depends on your FET's threshold voltage.

For example, it can be class AB if you use JFETs which are ON when Vgs=0V.

If you use MOSFETs which require Vgs of a few volts (Vgsth) to begin turning on, then at idle both FETs are off, and you need to move the input voltage by at least one Vgsth up or down to turn one FET on. So it is class C.

Adding the gate bias voltage sources (as in the first schematic) would make it class AB once the bias is high enough to turn both transistors on at idle (zero output current).

Not the answer you're looking for? Browse other questions tagged amplifier power-amplifier class-b-amplifier or ask your own question.

3
Why can't class A amp drive 8 ohm speaker with just one BJT?
0
Amplifier Power Requirements
-2
Why does my amplifier turn sine waves into square waves?