What are these electronic components from an old radio?

I disassembled an old radio that I found in my attic and found some electronic components that I can't recognize.

I think that the first component is an inductor. I'm pretty sure about that... But I can't understand why it's made the way it is. There is more than one coil on the same core, so the coils should be coupled... But for what purpose?

As for the second and third component I really have no clue about what they are. However, I tested the third component with my tester and I found out that the resistance between the majority of its pins is really low and many of them are short-circuited on the PCB.

Finally, there's a photo (below) of a speaker. I'd like to know why the connection to the speaker is made with a "coil". There are a lot of connections made like that on this circuit. The first is a ferrite rod antenna for MW/LW frequencies.

The second seems to be a variable capacitor: as you turn the knob, the plates will overlap more or less, which changes capacitance. Between the plates is a dielectric, which can be air or plastic sheets.

The third is either a variable inductor or a transformer with variable coupling (variable coupled inductors): turning the screw in the center moves a ferrite core inside a coil. More ferrite inside the coil increases the inductance/coupling. These were most likely adjusted at the factory, so if you want the radio to still work it is best not to adjust them...

It's wire wrapping. Quite fast and convenient to apply during manufacturing, and very reliable. Here's a wire wrap pistol. These days it seems to have been displaced by pre-assembled wiring harnesses with pre-crimped connectors (video because robots), but it was used pretty much everywhere a few decades ago (and is still used in some applications).

And film cored such as this or the one you have: 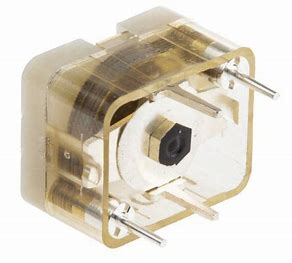 The third component is a tuned IFT probably at 455KHz .It is complemented by the orange ceramic resonator .This scheme provides selectivity on the AM section of this multiband receiver. Other tuned transformers and sometimes ceramic resonators tuned usually at 10.7 MHz provide FM selectivity,