Generally components behaviour changes with respect to temperature, e.g. a resistors resistance is a function of temperature, as is the saturation current of a BJT.

When putting a current through a component this can cause the temperature of the component to change.

Given that a circuit is driven with a repeated periodic signal, will the temperature of the components approach a constant temperature over time? (For arguments sake consider room temperature constant and the circuit is in free air).

I want to measure the behaviour of a circuit, and want for example the resistance of a given resistor to be as constant as possible for the duration of the measurement. Is it wise to drive the circuit for a period before taking the measurement such that the change in resistance due to heating is minimal? This would include enabling power supplies etc.

The temperature of you components will achieve a steady state, unless there is a thermal runaway situation.

I said steady state rather than constant, because each pulse could create a little glitch (rise) in temperature, but, these glitches are not likely to be significant and affect the results of your test.

It might take some time to get to the steady state, the larger your circuit - the longer the wait. An obvious way to ballpark the required time is to sample the value of interest every 5-10 seconds (every minute if you have a large thermal mass) and draw a graph. You'll see where the graph flattens out.

The reason the circuit is going to reach a thermal equilibrium is because it receives roughly the same amount of energy with every pulse, but it loses more and more energy (per unit of time) as its temperature grows, until the losses are going to catch up with gains.

If the behavior of the circuit changes at temperature such that it dissipates more and more power with each pulse, i.e., it heats up faster and faster, the equilibrium between energy gains and energy losses may not be achievable or may be achieved too late:) This would be a case of thermal runaway, but it does not look like this is the case with your circuit.

The thermal timeconstant of a cubic meter of copper is 9,000 seconds.

That is also the timconstant of a square meter of copper foil, if the heat can only flow along the sheet of metal, that is, the sides (the 2 square meter surfaces) are insulated.

The thermal timeconstant of 0.1 meter cube of copper is 90 seconds. Yes, if 10:1 smaller, the timeconstant is 100X faster.

The thermal timeconstant of 1milliMeter of copper is 0.009 seconds.

Curiously, the thermal timeconstant of silicon (the basis of clays and ceramics) is 11,600 seconds for a cubic meter of silicon. Thus silicon and copper have about the same thermal response rate. The thermal conductivities are considerably different, but the timeconstants are similar.

We can also predict the thermal-distortion for AC signals. Given the thermal time-constant, we can model the behavior of OpAmp differential-pairs being heated by OpAmp output transistors and causing the input-offset-voltage to change, with dVoffset/dTemperature as one specification of all opamps.

Given the gain setting function of (most) opamps uses resistors, and the internal heat of these resistors (could be the bulk carbon composition, the bulk metal film, or the laser-trimmed thin-film types of resistors), the GAIN of our opamp stage will also change.

The screenshot includes, in lower left, the predicted thermal distortion (summing to over 100 microVolts with 1milliVolt from the sensor) is 100uV/0.34uV or nearly 300 quanta (ADC quanta) of nonlinearity, or upconverted-as-amplitude-modulation. 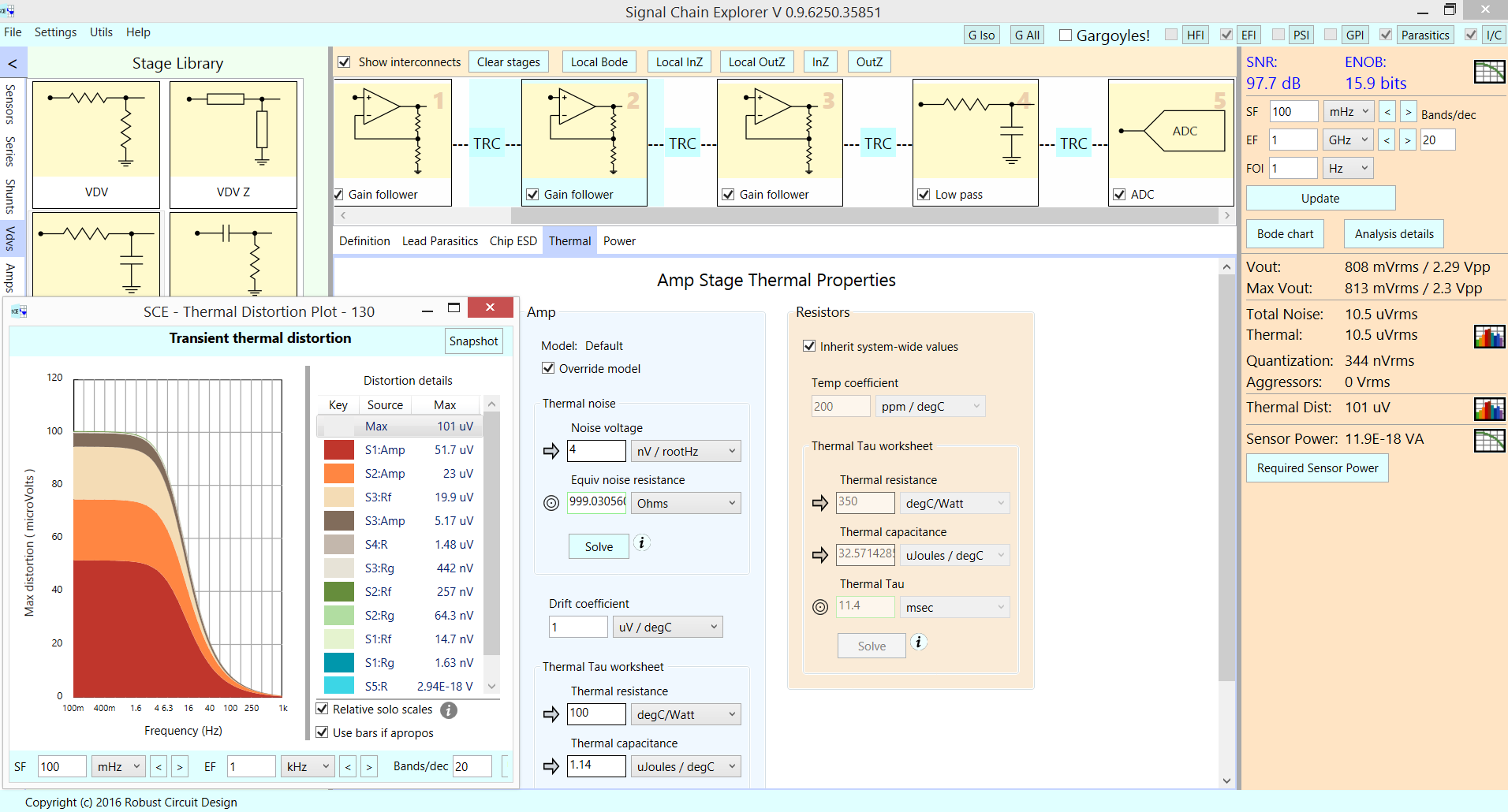 Notice in the center worksheets, the ability to edit the

a) opamp thermal noise, either as RootHertz or as Rnoise

b) params of the opamp thermal mass, thermal resistance, and dVoffset/dTemp

c) thermal properties of the resistors used in setting the gain.

To minimize OpAmp contribution to thermal-distortion, insert a BUFFER. The tool includes Buffered OpAmp as one stage choice.

To minimize Resistor contribution to thermal-distortion,

e) or use identical resistors in series with equal ability to dissipate heat and dispose of heat,

f) or use the method of Walt Jung of ADI for low distortion Audio PAs: use physically large resistors so the thermal mass is large and the Tau is very long.

If you are responsible for Signal Chains with better than 10 bits SINAD, the error budget should include a line item for thermal distortion.

Not the answer you're looking for? Browse other questions tagged measurement temperature or ask your own question.

7
Predicting thermal equilibrium: what's wrong with my time constant?
6
How to make single ended voltage measurements
3
Alternative ways to maintain temperature stability of silicon BJT circuits other than feedback resistors
3
Is the carbon-zinc battery that I am characterising overloaded? Using HPPC
1
Measurements using spectrum analyzer
1
How to take resistance reading when value is effected by measurement?
0
Impedance/capacitance measurements