What's the difference between field-effect transistors (FETs) marketed as switches vs. amplifiers?

Is there a difference in the way these are designed and manufactured? Can one type generally be used in the other application, but not vice versa?

There are various choices that can be made in the design of transistors, with some tradeoffs being better for switching applications and others for "linear" applications.

Switches are intended to spend most of their time fully on or fully off. The on and off states are therefore important with the response curve of the in-between states being not too relevant.

For most applications, the off state leakage current of most transistors is low enough to not matter. For switching applications, one of the most important parameters is how "on" on is, as quantified by Rdson in FETs and the saturation voltage and current in bipolars. This is why switching FETs will have Rdson specs, not only to show how good they are at being fully on, but because this is also important for designers of the circuit to know how much voltage they will drop and heat they will dissipate.

Transistors used as general purpose amplifiers operate in the "linear" region. They may not be all that much linear in their characteristics, but this is the name used in the industry to denote the in-between range where the transistor is neither fully on nor fully off. In fact, for amplifier use you want to never quite hit either of the limit states. The Rdson is therefore not that relevant since you plan to never be in that state. You do however want to know how the device reacts to various combinations of gate voltage and and drain voltage because you plan to use it accross a wide continuum of those.

There are tradeoffs the transistor designer can make that favor a more proportional response to gate voltage versus the best fully on effective resistance. This is why some transistors are promoted as switches versus for linear operations. The datasheets then also focus on the specs most relevant to the circuit designer for the intended use.

For power MOSFETs, there is a good rule of thumb indicating that the newer the part, the better it is optimized for switching applications. Originally, MOSFETs were used as pass elements in linear voltage regulators (no base current degrading the no-load losses or overall efficiency) or class AB audio amplifiers. Today, the driving force for the development of new MOSFET generations is, of course, the ubiquity of switch-mode power supplies and the continuing thrive towards motor control with frequency converters. Whatever has been achieved in this regard is nothing less than spectacular.

Some of the characteristics that were improved with every new generation of switching MOSFETs:

However, there is one not-so-well-known gotcha for linear applications of MOSFETs that has become more pronounced with their newer generations:

Admittedly, this is an issue with any type of MOSFET, old and new, but the older processes were a bit more forgiving. This is the graph that has most of the relevant information: 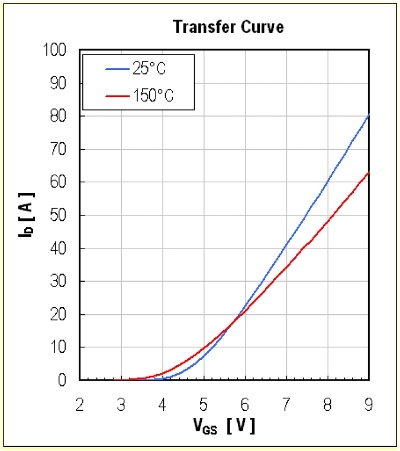 For a high gate-to-source voltage, an increase in temperature will lead to an increase in on-resistance, and a decrease in drain current. For switching applications, this is just perfect: MOSFETs are driven into good saturation with a high VGS. Think about paralleled MOSFETs, and keep in mind that a single MOSFET has many tiny, paralleled MOSFETs on its chip. When one of these MOSFETs gets hot, it will have an increased resistance, and more current will be "taken" by its neighbors, leading to a good overall distribution with no hotspots. Awesome.

For a VGS lower than the value where the two lines cross, called the zero temperature crossover (cf. IRF's App'note 1155), however, an increased temperature will lead to a decreased RDS,on, and in increased drain current. This is where thermal runaway will knock on your door, contrary to the popular belief that this is a BJT-only phenomenon. Hot spots will occur, and your MOSFET may self-destruct in a spectacular way, taking with it some of the beautiful circuitry in its neighborhood.

Rumor has it that older, lateral MOSFET devices had better-matching transfer characteristics across their internal, paralleled, on-chip MOSFETs compared to the newer trench devices optimized towards the above-mentioned characteristics important for switching applications. This is further backed up by the paper I have already linked to, showing how newer devices have an even increasing VGS for the point of zero temperature crossover.

Long story short: There are power MOSFETs that are better suited for linear applications or switching applications. Since linear applications became something like a niche application, e.g. for voltage-controlled current sinks, extra caution towards the graph for the forward-biased safe-operating area (FB-SOA) is needed. If it doesn't contain a line for DC operation, this is an important hint that the device will likely not work well in linear applications.

Here is one more link to a paper by IRF with a good summarization of most things I have mentioned here.

Not the answer you're looking for? Browse other questions tagged transistors switches amplifier jfet or ask your own question.

12
Capacitor Inrush Current
10
What's the difference between small signal bipolar junction transistors (BJTs) marketed as switches vs. amplifiers?
9
Selecting a MOSFET for DC use
6
Apparent inconsistency of MOSFET power rating in datasheet: SOA v. max power
4
How must I read this MOSFET specification?
1
FET DC operation in the ohmic region if the SOA curve doesn't have a DC line?