The upper resistor R and the capacitor form a low pass filter, but why the lower resistor R? What would change if it was omitted?

Simulating this in LTSpice with a 7V input with a 10KHz 2V peak-to-peak sinusoidal ripple with R=5K and Rc=100, Rload=1K (emitter to ground), C=1uF and a 4.7V zener doesn't show an obvious difference with the lower resistor removed. 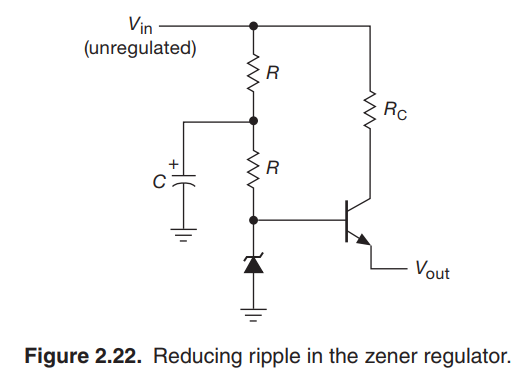 It's not to hard to visualize. I'll try and just use words, as your diagram is easily read. But if it turns out I need to write more, I may create a diagram to make some points more easily seen.

Imagine that the capacitor has been charged up to a voltage that is halfway up, between the zener voltage, \$V_Z\$ and some assumed average \$V_\text{IN}\$ (which we both agree has ripple present on it.)

Now, let's switch to a tiny-signal viewpoint (meaning that we advance time in very small units.) Suppose a tiny increase in voltage occurs on \$V_\text{IN}\$ so that it is now \$V_\text{IN}+\Delta V_\text{IN}\$, where \$\Delta V_\text{IN}\$ is quite small. What happens? Well, capacitor \$C\$ will hold the voltage it has. Since the zener voltage hasn't changed (yet), the difference of voltage across the lower \$R\$ stays the same. So the current in that resistor is the same. What changes is that the upper resistor starts to supply a slight increase in current into that capacitor node. But that current doesn't go through the lower \$R\$ but instead goes into the capacitor, which "absorbs" it.

The upshot of this is that the lower \$R\$ "looks like" a current source to the zener and BJT base. So the zener current doesn't change and therefore the zener voltage doesn't change and therefore pretty much everything stays just as it was before. The only change that takes place is that the upper \$R\$ increases its current slightly and the capacitor absorbs that current. In short, the added current from the upper \$R\$ bypasses the lower \$R\$ and instead heads over to add charge to the capacitor, instead.

The lower \$R\$, the zener, and the BJT don't see this sudden change, because that change has been contained to the upper \$R\$ and the capacitor \$C\$.

You need the lower \$R\$ to make a current-source.

(I'm out to run a 5k and will be back soon to see if you have more questions.)

After thinking about this more my current understanding is that the lower resistor is basically to increase the input impedance that the low-pass filter is presented with and this way to decrease the load on the filter which decreases the ripple at the output of the filter.

Not the answer you're looking for? Browse other questions tagged resistors voltage-regulator zener low-pass or ask your own question.