Why can the loading resistor and capacitor let the unloading waveform become from negative to positive voltage?

Fig(1) is part of schematic,and it generate a sine wave .Fig(2) shows two waveform which are with load and unload,i can understand that these two waveforms will be different because of loading,but why is the beginning of unload waveform negative,and after connecting the resistor and capacitor,the beginning of the waveform will become positive? 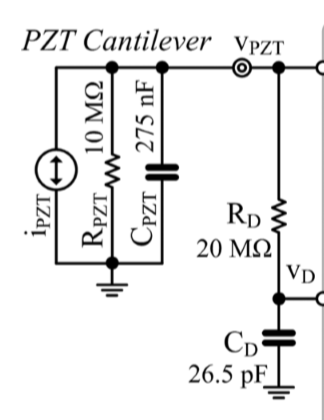 A piezo-electric crystal generates an AC voltage charge under acceleration. There is no DC content. With no restriction on motion under a sine acceleration yields an unloaded sine wave.

By superposition you can imagine a square wave added in the opposition direction after the peak acceleration declines. this indicates the end stops are on board sides of the cantilever causing a reaction force and acceleration to the PZT vibration.

Since velocity is the integral of a(t) a 90 deg lag would indicate the PZt was approaching the maximum velocity before impact but did not as the force was still acclerating before it hit.

this stiff end-stop allows a stiffer voltage and current to be used to charge the inductor to which the stored charge energy is being transferred into a stored rising current, which is then commutated when the poarility changes direction to result in a continuous DC charge curren to charge the battery.

The challenge of this design is to make the PZT robust enough to survive expected mechanical energy being harvested and converted into voltage, then switching into alternating inductor current which is the integral of the applied voltage or a loaded sawtooth to a loaded square wave with a weaker sinusoid.

Why is the sine weaker?

Because we know the PZT capacitance produces current according to Ic=C dV/dt and the square step yields a high dV/dt than the slope of the sine wave.

Not the answer you're looking for? Browse other questions tagged voltage load waveform or ask your own question.

0
Misunderstanding from the author saying,about the current flowing path

1
Can I use a voltage divider and/or voltage follower to produce 1V from 9V for an op-amp oscillator?
3
Why does the diode current waveform look like this in a full-wave rectifier?
1
Peak and RMS voltage for a sine wave
0
Voltage waveform at the Emitter of a Buck Converter?
5
Peak to Peak vs. Amplitude