I am reading through Complete Electronics Self-Teaching Guide with Projects, which has turned out to be a fantastic resource for quickly learning electronics basics. But I've come across an example in the section about diode breakdown and burnout that has me completely confused. 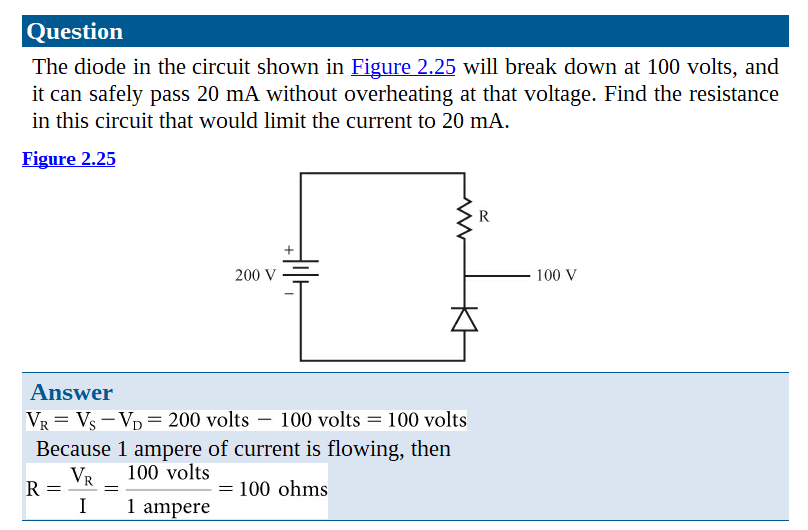 Obviously, this doesn't match with the answer provided. It looks like I was right about the drop, but why are we suddenly talking about a full ampere? I thought I was supposed to be calculating for 20mA?

Am I completely misunderstanding this example, or is there a problem in the example itself? Thanks in advance for your help.

I don't have that book to confirm, but look at the book's errata page on the publisher's website here (scroll about halfway down the page and click the "Errata" tab):

You can see that a change was made to the question which did originally mention 1 ampere:

The diode in the circuit shown in Figure 2-25 is known to break down at 100 volts, and it can safely pass 1 ampere without overheating. Find the resistance in this circuit that would limit the current to 1 ampere.

The diode in the circuit shown in Figure 2-25 will break down at 100 volts, and it can safely pass 20 mA without overheating at that voltage. Find the resistance in this circuit that would limit the current to 20 mA.

So you can see that they changed the question. However it appears that in your edition (and perhaps in all editions, since the answer isn't mentioned in the errata) they forgot to change the answer!

Based on the new details in the question, your answer is indeed correct. Of course you should read the rest of the errata on that Wiley webpage, in case any of them also apply to your edition.

You might also want to read the comments on some parts of that book, in the "Spot The Mistakes" section, about one-third of the way down this page (search for the author's name Boysen):

It seems to refer to an earlier edition of the book, since it shows the original "1 ampere" current in the question. However some of the other concerns mentioned there might also apply to your edition.

9
Basic question about diode voltage drop and resistor position
0
Do we include the voltage drop across a diode when calculating the current through the diode, taking into account breakdown has occured?
0
LED MOSFET switching circuit
0
Why do most textbooks use the inverse formula 1/rtotal for parallel resistance?
0
How to use resistor wattage formula