How do single phase BLDC motors start in proper direction?

There are descriptions on internet of the single phase BLDC motors which are powered by Vdc (such as PC cooling fans 12V). Interestingly pictures shown describing outrunner type with equal number of poles and stator coils (usually 4 both). One detailed application note provided by Microchip : Sensored Single-Phase BLDC Motor Driver
Here is a picture showing the motor and it's control using a full H-bridge: 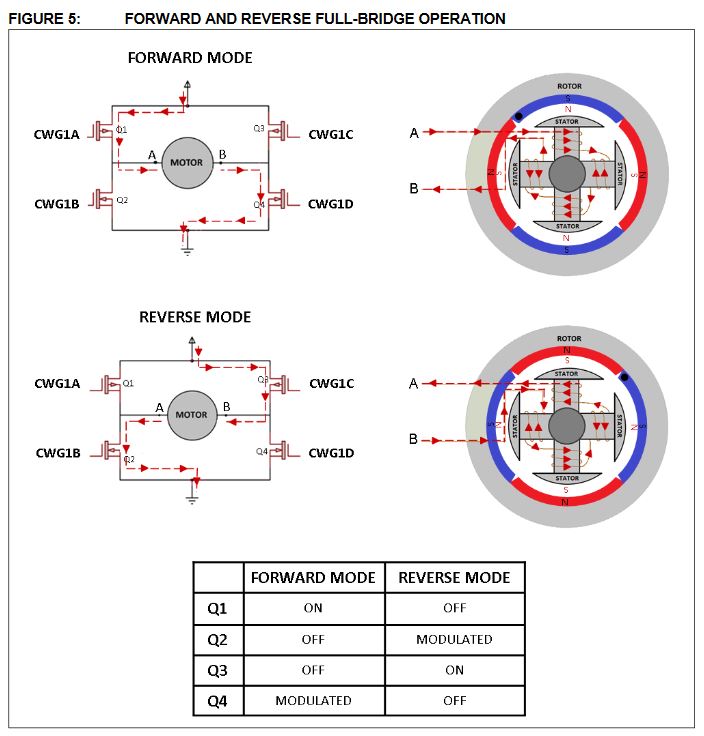 Controlling full H-bridge is shown reversing the current flow in sync with Hall sensor reading. What is confusing to me that there are no means to ensure proper direction of the rotation at startup. Even more confusing is the following text from this app note (page 4):

How is it possible? All the toggling of the phase current does is to create repulsive force between stator coils and magnetic poles (knowing the polarity of the current position from the Hall sensor reading) but does not make the poles rotate in any "known" direction. These motors work similar to "switched reluctance" as the poles are driven to the position where their magnetic flux get fully aligned with stator coils flux. In this type of motors Magnetic flux lines of rotor magnets and stator coils are not perpendicular to define the direction of the rotation. Do the PC cooling fans have equal number of stator coils and rotor poles? How do such type of motors start rotating in one direction only? Thanks in advance for any input on this.

After more research was done I confirmed my initial doubts of the statement quoted from the Microchip Application Note which states that a direction of motor rotation at startup can be set by the direction of the current produced by the phase-generating H-bridge (or in other words by the polarity of the energized stator coils).

Simple answer is - it is not possible to control the direction of the motor rotation by the controlling phase polarity in the motor design featuring a single phase BLDC motor with equal number of coils and rotor magnets. The only possible means to set a rotation direction are those by providing some sort of magnetic field circumferential asymmetry during the startup.

More detail answer: As a reminder - the BLDC motors work on the principle of "following least reluctance" similar to "switched reluctance" motors although in a different way recommended overview of electric motors here

As they don't use Lorentz force to move the conductor, but instead BLDC motors move the rotor by the forces of attraction and/or repulsion which have vector perpendicular to the surface of the rotor's magnet (in other words their magnetic field flux lines are parallel, either attracting or repulsing), whence the polarity of the energized coils do not set the direction. Thinking of the BLDC motor as based on the principle of Lorentz forces moving the rotor is a widespread mistake which I observed even in the textbooks.

Another point to remember that a motor with equal number of coils and rotor magnets tends to stop (given enough magnet strength and small enough air gap) at such a rotor position that magnets will be attracted to the coils' cores because un-energized coils' core is of high permeability alloy which will be magnetized by static field of the rotor' magnets. Again, the "follow the least reluctance" law will stop magnets each facing the coils cores.

Therefore startup of such motor is done by a controller reading Hall sensor and depending on which coils attracted which magnet poles, controller' program will energize all the coils with polarity to create exact repulsive force to start a rotation. At this point the direction will be set by special means to ensure asymmetry of the startup magnetic field. This is done, for ex. in all PC cooling fans, by making the stator coils cores asymmetric: looking along the circumference of the rotor, their core is made thicker at the "entry" and thinner at the "exit" point making the magnet "slip" in only one way. So when coil is energized at the startup the repulsion forces (clockwise vs counterclockwise) are imbalanced hence forcing the rotor disk in one direction only. Another "side effect" of this solution is that cogging forces are barely felt here because the core induced field is not monolithic any more (or in other fans the solution is made by making gap larger at one end -again making cogging less felt).

Here is clear example of an asymmetric offset coil core 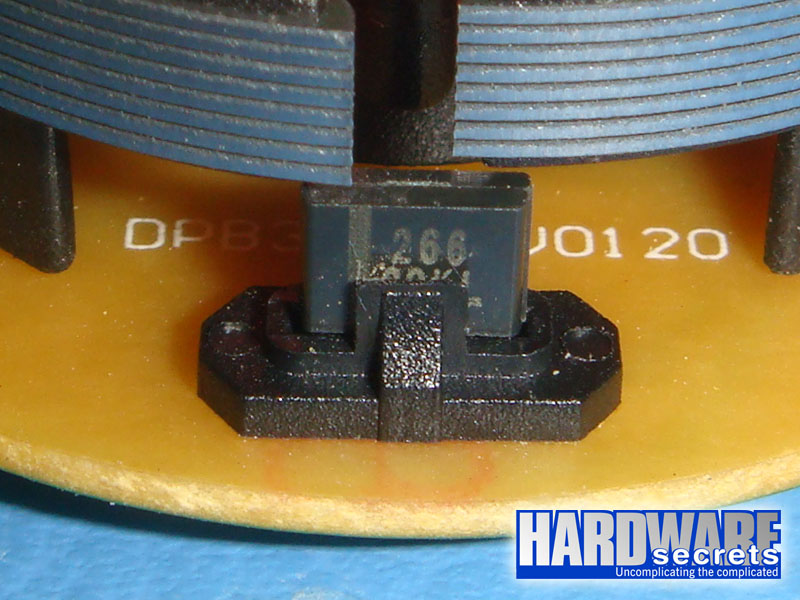 I hope this will make it clear to everybody who stumbles over the same confusion.

The author of that app. note needed to learn more before publishing, I'd say. I'd also been casually wondering, expecting that a Hall or such sensor and IC would significantly increase the cost of the motor.

This reminds me of AC synch. timing motors which start randomly in either direction, following a chaotic startup. A resilient brake (probably wrap spring?) blocks further wrong-way motion, and kicks the rotor in the wanted direction.

It took a long time to learn why the single-coil stepping motors always step forward in quantized-analog watches with hands, and also such clocks. Apparently, they all feed the coil with a pulse having polarity opposite that of the previous pulse.

They're likely all only two-pole, rotor and stator, with perm. mag. rotors. Asymmetrical pole pieces are the key, with air gaps decreasing progressively (sometimes? See below) along each pole face. Between pulses, the magnetic axis of the rotor aligns with the shortest/shorter air gap. That's offset by perhaps 30° from what it would be with a uniform air gap. A pulse must initially repel the rotor, but the offset ensures that it starts rotating forward. The inventor's name is known, but apparently not widely; I've lost track. It's in the field of horology.

I have a little low-cost fan with an outside rotor and a four-pole wound stator. Rotor is simply a ring, magnetized presumably with four poles, alt. N & S. I removed the little plastic retaining ring and pulled out the rotor. I'd left it out, collecting dust, alas, hoping to learn more, also wondering how it worked without a flux sensor. Has a porous bronze bearing, nice.

Well, surely enough, the poles each extended 75° or so, and doggone if they weren't asymmetrical! Think of each as a T, with sagging ends of the (curved) top writing stroke. One half of that stroke has a smaller outer radius! Of course, that means a bigger air gap.

Yes, but ... It wants DC. Well, there's a round PC board hiding under the stator. There's a little transistor down there, just possibly in an L-C oscillator circuit! Room to hide a little capacitor... It must be an AC synch. motor. (^_^)

In the future, I should use some mag. viewing film to find out the rotor mag. pattern, and disconnect the stator leads, feed it with DC after marking the rotor, and try stepping by alt-polarity pulses. (^^)(^^)

Early stepping motors, perhaps developed by Sperry Gyroscope for remote compass repeaters (displays), had salient-pole (spoked) rotors with maybe six teeth, no windings. Have forgotten whether rotor was perm. magnetized. Stator was maybe four-pole, fed over two circuits by staggered pulses from a rotary switch in the gyrocompass. I think only one "phase" of the stator was energized at a time, statically, but iirc the other "phase" was energized also at the beginning of a step, partly moving the rotor. Tutorial from a many-decades-old Navy doc. explains it in painstaking detail, with fine explanatory illustrations. Alas, have forgotten some critical details. Of course, there was a reduction gear train between the stepper and the big indicating disc.

When first powered up, each repeater had to be manually set, "synchronized" to the current course as indicated inside the gyrocompass.

Some time later, most likely, C.P. Steinmetz (or Ernst F.W. Alexanderson?, both with G.E. Research) invented the Selsyn™ (self-synchronizing, more than likely), known in the Navy as a synchro. The Navy adored them, using them to send data to powered gun mounts and turrets, among other purposes. Wondrous as they are, I'll forgo explanation, save to say they're internally like motors, usually with a two-pole rotor and a stator much like a three-phase motor's. They don't spin fast continuously, (or must not...). Not sure there's a good, first-rate explanation.

An amazingly-ingenious stepping motor made by Haydon Switch and Instrument was a modest variation of the simplest two-pole/shaded pole squirrel-cage induction motor found in countless lowest-cost AC fans and blowers, along with other applications.

Its rotor was, iirc, simply a two-pole magnet, diametrally (sp?) magnetized. Stator, including shading coils, was the same, except that a permanent bar magnet with quite-good coercivity (? resistance to being demagnetized) was placed between the coil and the stator poles. Perhaps there was an air gap inside the coil.

Power off, the combo. of the perm. magnets ensured that the rotor had only one stable position. Applying DC of the proper polarity and sufficient voltage reversed the stator flux polarity at the rotor.

Shading coils (those brazed loops) delayed flux buildup at their halves of the poles, ensuring consistent direction of rotation. During the pulse, assuming it had sufficient duration, the rotor settled half a turn from home position. When the pulse ended, shading coils ensured a return to home, in the same direction.

One unidirectional pulse to one stator coil per revolution was amazing enough, but modifying an existing design only moderately was remarkable, as well.

Perhaps the fact that most applications needed smaller step angles limited sales; real pity if so.

IIrc, Barber-Colman made a related variant of the ubiquitous two-pole/shading-coil motor mentioned above. It was reversible! It had 2+2 shading coils, wire wound and multiturn. Diagonally-opposite coils in series (quite likely), same for the other two, were connected to three screw terminals. Short-circuiting one pair determined start direction.

Direction is determined by choosing the appropriate polarity of excitation to drag it away from the starting position in the desired direction.

Not the answer you're looking for? Browse other questions tagged motor control brushless-dc-motor single-phase .