I am studying Transistors from the book: Arts of Electronics by Paul Horowitz and Winfield Hill (second edition). I have a few questions related to the working of a transistor, especially in the saturation region.

In the rule 1, as to the working a transistor, it has been mentioned: "The collector must be more positive than the emitter".

2. And is it true only for that forward-active region or in all regions (i.e. saturation, cutoff, reverse-active)?

3. Also what would happen if the collector potential becomes less than that of the emitter potential?

Edit: While reading a similar question on the website, I was directed to the link: Transistors in saturation region where a user (Studiot), explained the saturation from the perspective of an electronic engineer, he mentioned that the collector voltage can not be zero (or less than the emitter voltage, which is grounded in his circuit). Hence the saturation voltage can be around 0.2V - 0.4V.

Also I read that in the saturation region, it appears as if the emitter and collector are short-circuited, then why is there still a potential difference of 0.2V - 0.4V existing?

Although the question shows lack of research ( near duplicate ) , I'll offer some sage advice. 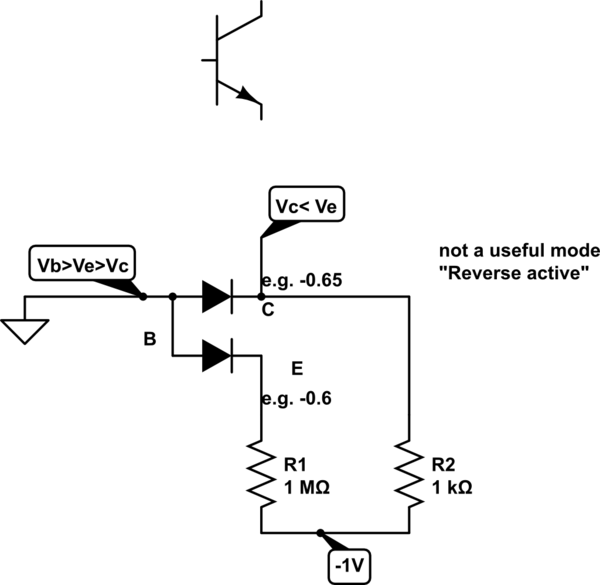 Because of doping differences. BE is not the same as BC in VI characteristics yet on a DMM this is how you determine is a transistor is NPN or PNP by testing the forward voltage at 0.1mA ~0.65V in "Diode test mode"

Although this is an over-simplistic explanation , when a transistor is in saturation mode rated at Vce(sat) @Imax with Ic/Ib=10 the higher doped BE diode has a higher ESR which dominates the Vce @Ic. The effective Rce or collector emitter resistance as a switch ( or ESR as I generalize as) is the incremental ΔVce/ΔIc rise when pulling down a load current.

Vce may start from low mV with pA to 0.2V nominal ( at some rated current) to >1V under high pulsed current above rated steady-state current.

This Rce value (aka "BJT switch resistance between collector emittor) is rarely shown in datasheets except for Diodes Inc and a few others as "low Rce" switches. It costs more , but performs better and in general always is inverse to power rating of the part.

0
in saturation of BJT, the current gain is reduced
0
BJT at saturation
1
Common emitter characteristics in the saturation region
0
Current in Saturation and Active regions of BJT
3
Can the parameter \$\alpha\$ and \$\beta\$ be used for any BJT?
1
why biasing an emitter follower with a transistor will cause the following transistor falling into active region?
0
Active region in BJT in a Common emitter configuration
1
How does an active device work as an oscillator when its output is fed back to the input?
0
Collector must be more positive than the emitter
4
Art of Electronics: Transistor switch