When current flows from a battery, does voltage decrease?

I understand voltage to be a potential for electrons to be pushed through a circuit.

However, in a battery, you have an electron build-up that creates the voltage. Once current begins to flow, electrons are now moving through the circuit.

Does this mean that the voltage actually begins to decrease as a direct result of current flow? Specifically are electrons "used up" or do they simply lose energy (dissipated as heat in circuit) which leads to a lower voltage potential? Or another scenario, do the electrons, upon returning to the battery, still act as voltage potential to continue to push a consistent amount of current through a circuit despite the loss of energy?

Or is there something else I'm missing entirely?

The voltage of the battery depends on the chemistry of the cell it is based on. For ex, a Lithium-Polymer cell has a nominal voltage of 3.7V and that of a lead-acid cell is 2V. For cells belonging to a particular chemistry, the voltage depends on many factors, the prominent one being the concentrations of the electrolyte, electrodes etc. The increase and decrease of cell voltages while charging and discharging is due to the changes in the these values. However, the number of electrons inside of a battery doesn't change in normal operation no matter what. Applying Kirchhoff's current law, you can check it for yourselves. No matter your circuit and its operating conditions, the current going out of the battery should be equal to the current going in. The voltage only changes because the chemicals inside the cell are changed slightly and not because of a change in the number of electrons. Coming to the heat part, the heat generated in the circuit is compensated by the loss in potential energy of the battery.

In general, the answer to your your question is, "yes". As other answers have pointed out, a battery has an effective resistance. This is, in part, do to the fact that the internal structure has an intrinsic resistance. However, it also reflects the fact that the ions in the electrolyte, which are involved in the production of energy, have limited mobility, and this limits the current available and reduces battery voltage under load.

However, just to make your life difficult, it is possible for a battery voltage to rise with increasing load. I've seen it. It's a long-term effect, and I observed it while doing capacity testing on a NiMH battery pack which was going to be used on a missile shot (suborbital). Running the battery with a constant current load, I observed the output voltage gradually rise over time. The cause was fact that the internal power dissipation produced a temperature rise in the pack, and the output voltage rises (all else being equal) with temperature. After running for a while (the test duration was designed to deplete the battery in about 45 minutes), the output voltage under heavy load was actually higher than the battery produced under light load at the beginning of the test.

It was weird, but made sense when I figured out what was going on.

Strictly speaking, batteries are a means to push electrons. They don't use them up.

However, a battery also has an effective internal resistance. This resistance is dependent on a number of things (cell chemistry, temperature, cell age). The higher the internal resistance, the more voltage will be dropped internally, and the less force the battery has to push electrons.

This reference is an excellent read on the subject.

Electrons aren't used up they just stop migrating from one pole to the other because the battery is depleted.

Imagine a double ended recipient with a diaphragm : 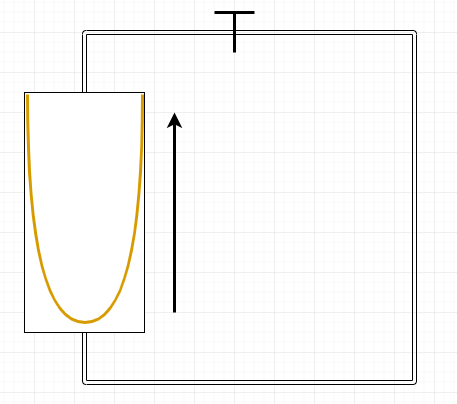 The pressure is the voltage (Diaphragm pushing).

As soon as you open the valve you get a current.

Opening the valve will also lower the pressure.

The more you open the valve the higher the current gets.

When the current rises the pressure will fall.

Everything that goes out comes back in, nothing is lost (closed circuit).

Current is simply the rate of change of charges per second. I=dQ/dt

Yes all batteries have a series resistance which causes voltage drop and ESR is somewhat inverse to mAh capacity and voltage.

A real physical battery, in particular a real physical Lead-Acid battery, has significant capacitance because of the arrangement, orientation, structure of the chemical elements.

The capacitance means that electrons do "build up" and "run down" in the battery. But... this is not what a chemical battery "is": it is a feature of what a particular implementation does. For a discussion, read up on capacitors first, then batteries.

Real lead-acid batteries also exhibit concentration gradients. This too is a "build up" and "run down" phenomena. Again, this isn't "how a battery works", it's "how actual batteries that people make and sell" work.

7
How does current flow through a voltage source?
8
Why does capacitor voltage lag current?
14
Why is there no net current in a wire without a voltage applied?
1
In a DC circuit with one battery and one resistor, why does the voltage drop remain the same irrespective of the value of the resistor?
0
Does decrease in voltage decreases the speed of electrons in a series circuit?
2
In a circuit schema, why the voltage at the battery anode is conventionally 0V while the voltage at cathode is usually the voltage of the battery?