I've a little project and want to make a PCB for it, as small and thin as possible, but the electrolytic SMD ones are bigger than I wanted. With that I faced a small problem that led me to a question that can help future projects.

I know that I can replace an electrolytic capacitor by a ceramic one, but how to do it correctly?

Assume I have a 100uF 16V electrolytic one, what would be the equivalent for ceramic ones? If I reach the 100uF wanted with N capacitors rated X Farad in parallel, how do I match the 16V that I want?

Are there any considerations when doing it? Are there do's and don't's?

You should consider the reduction in capacitance that ceramic capacitors exhibit under bias. This is particularly true of the type of capacitor or capacitors that you will need to get to 100uF/16V. 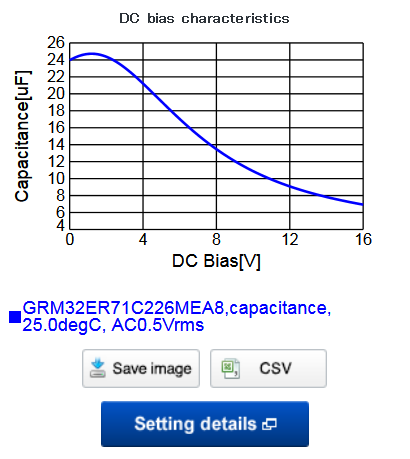 As you can see, at 12V, the capacitance has dropped to about 9uF, so you would need 11 of them to get 100uF with 12VDC bias, rather than the 5 you might have thought.

Electrolytic capacitors have stable value regardless of bias voltage.

The other possible consideration is that if you have something like a voltage regulator connected to the capacitor, the ESR may be too low when using the ceramic capacitors. Normally that might be considered an advantage, but some regulators are not stable (i.e. may oscillate at high frequency under some load, line or temperature conditions) if the ESR is too low. You can simply put a small resistor in series to mimic the electrolytic cap if that is the case.

As indicated in a comment by @OskarSkog another possible issue with too-low ESR is that the resulting high-Q LC circuit formed by stray inductance and the low-ESR capacitor can lead to damaging transient voltages across the capacitor under some conditions, as described in LTC's AN-88.

From the parameters you gave in the situation you described, it sounds like you aren't considering ESR/ESL and ONLY want to replace the electrolytics for ceramics because of size. In this case, there's nothing really special to consider - you can directly replace them.

When connecting capacitors in parallel, say, N capacitors each rated for V volts with C capacitance each, the total capacitance is NC and the voltage rating is still V. If you want to use higher voltage you will need capacitors rated appropriately.