Charge a single AA battery in a double charger?

Most cheap AA battery chargers charge two batteries at a time. Many devices use 1 or 3 AA batteries, meaning it's difficult to make sure you've always got two compatible batteries in the charger.

My fairly limited understanding of chargers is that they trickle feed energy into the batteries until the voltage in the circuit increases to a threshold, indicating that the batteries are charged. So it seems to me that I could short one of the two battery holders, and put the battery in the other one, such that the battery charges twice as fast.

Is this possible? If so, how can I figure out if it will change too fast and damage the battery? If not, is there any reasonably reliable way of charging a handful of single AAs, given only a cheap double AA charger? (I would prefer not to damage the charger, but don't mind modifying it, if necessary). Also, most of these batteries are NiMH, but there are a couple of lithium batteries, and there might be a NiCad or two as well.

If the charger is a genuine slow trickle charger then one battery in place of two batteries in series may well be OK.

Otherwise, shorting out one battery position will have variable results.

This may scramble the few neurons available to simple battery charger controllers and mean that the battery never charges or over charges and may not stop charging. Clamping a two battery power supply to a one battery voltage will probably cause more current than intended unless they saw you coming and took due precautions.

One possibility is to use an oldish deadish or low cost battery in the second position. This should not be so dead as to read "high" under charge but need not have the capacity of the good battery.

Charging a NiCd battery in a NimH charger may work and may not. If you are able to measure battery voltage under charge and stop charging at about >= 1.4V it will work OK (probably).

Lithium primary batteries must not be recharged.

Lithium secondary batteries MUST NOT be charged in any charger not designed for them, that their days (and yours)(and the charger's) may be long on the face of the land.

Most AA chargers(even the cheap ones) charge each battery in parallel. So, I WOULD NOT short battery holders to speed up charging. It wont work that way since each battery is energized in parallel. You would end up damaging the charger. Also, please DO NOT use ordinary AA chargers fro Lithium batteries(They require specialized ICs to control and monitor their charge cycle). You may end up over charging the lithium battery and have severe consequences.

How quickly the battery charges depends on charging voltage. 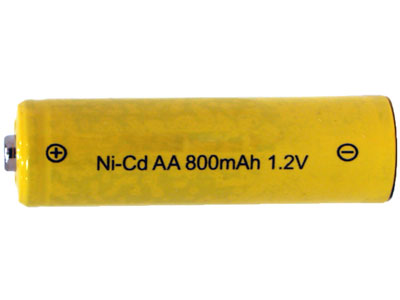 What I would suggest you to do is to first consider the Q value on the cell you want to charge. The total charge content of the cell(Q) value is calculated by

Q is always given on the cell in terms of mAh as seen in picture.

Grab a multimeter. Make a variable voltage source. You can build a simple voltage divider using variable resistors(POTs) and a simple 5v wall adapter/ cell phone charger. Set the output voltage of the voltage divider to 1.4V. Connect it to the cell. Measure the current. Increase the voltage suitably to increase the charge current. I would suggest 0.5Q to be safe(That would be 400mA for the cell in picture). This charge current would charge your cell in 2 hours! Make sure you disconnect the charger after 2 hours to avoid overheating the cell and possibly venting it(damaging it).

5
Dirt cheap NiCad charger
5
How fast may I trickle charge a full LSD NiMH battery?
3
Connecting a higher-current power supply to a lithium-ion charger will damage the battery. Why?
0
IC for Trickle Charging vs. Fast Charging a NiMH rechargeable battery using solar and wall charger?
0
Rebuilding Makita NiMH Battery with Cells of Bigger Capacity. Will it Charge Properly on the Old Charger?
1
Is this a float charger or trickle charger?
0
Can I charge two 6v batteries with a 12v battery charger?