Finding the current of an open circuit for Thevenin Equivalence

The circuit is open at the right, which implies that there is NO current flowing through the 16 ohm resistor.

There is current flowing through the 20 ohm resistor at the very least, and I think to at least some extent the 80 ohm resistor.

Apparently, the current is 1 A, but I don't agree with this. If I track the flow of current, it goes downwards from the emf with current I, then it WOULD be split into, say I2 and I3, but the current can only really travel upwards, so it shouldn't split. The same logic should apply to the top junction. Because of this, I argue that to find the current, the 20 ohm and 80 ohm resistors are added in series, because the same current flows through them, which gives a current of 0.2 A. However, the worked example's solution merely does I = 20 V / 20 Ohms to give 1 A.

I would be okay with this if no current is flowing through the 80 Ohm resistor, but when the solution turns to finding the current from either end point, A and B (which, if I could label in the graphic, are at the circles on the far right), as one needs to do to find the open circuit voltage for the Thevenin voltage, the 20 ohm and 80 ohm resistors are added in parallel.

So I seem to have a mental block - if there is no current traveling through the 80 ohm resistor, why are we adding it in parallel with 20 ohms when finding equivalent resistance to find V_oc?

Also, why wouldn't there be current through the 80 ohm resistor in the first place? And if there is, why don't we include it in our current calculation? 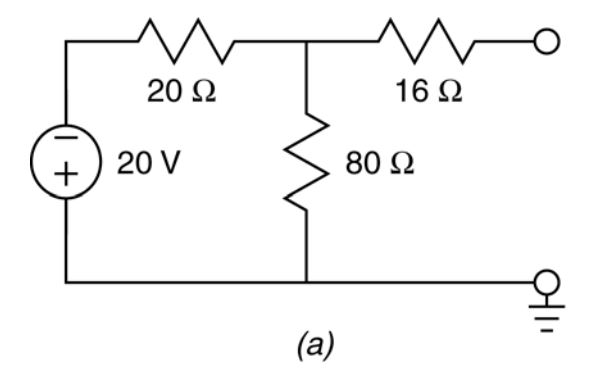 Saw the link you posted. They are never saying that 1A flows through the resistor 20 ohms. The current is 0.2 A when open circuited. They just transformed the voltage source to current source to reach the thevenin's eq. circuit.

This is how a voltage source is transformed to current source. 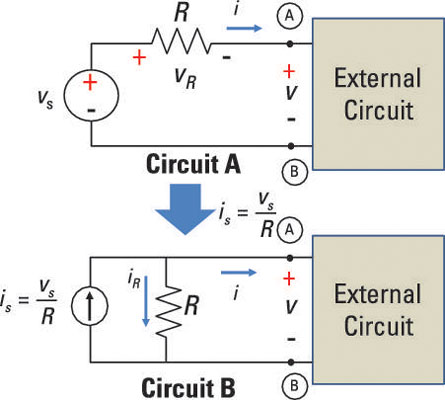 In place of R, we have 20 ohms and in place of Vs we have 20V source. Everything to the right side of A and B would be "external circuit" while transformation.

Looking only at this bit of the circuit, we can tell that the output resistance is \$20\Omega\$ because that's the only resistance there is. And the output current is calculated by shorting the two open terminals together and finding the current through R1, which is indeed \$\frac{20V}{20\Omega} = 1A\$. I think your "mental block" is that you're looking at the circuit as a whole for this step, but the book is merely creating the equivalent circuit for V1 and R1 so that the rest of the circuit can be analyzed.

Now we see why the solution converts the voltage source to a current source, because it makes it possible to calculate the equivalent resistance of R1 and R2, which was impossible with the previous series-parallel configuration.

I don't think I need to re-work the entire rest of the solution for you, but notice how the solution again transforms the circuit from a current source to a voltage source after finding the resistance of R1 and R2 in parallel so that it can put the equivalent resistance in series with R3.

Not the answer you're looking for? Browse other questions tagged current thevenin homework or ask your own question.