What is "drive voltage" for a MOSFET?

In the attributes of a MOSFET, Digi-Key lists several different voltages. I think I understand what most of them are, but there's one I don't understand: "drive voltage."

Let's take this P-channel MOSFET as an example: 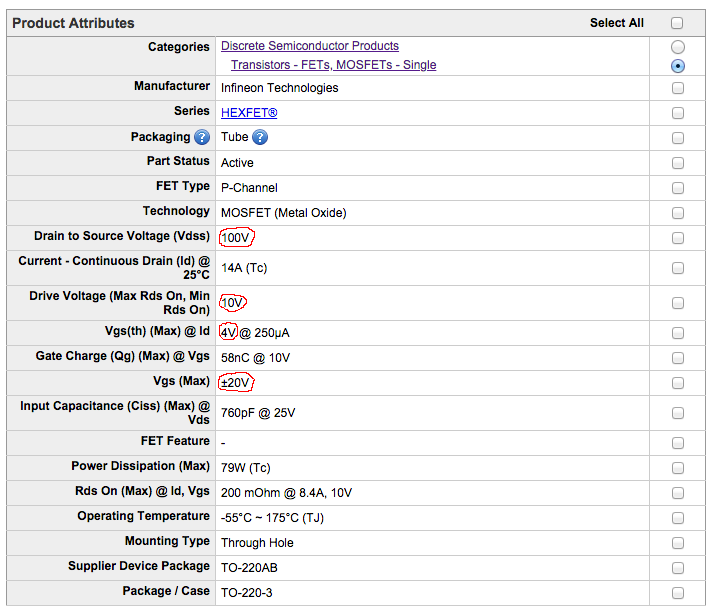 So, there's "Drain to Source Voltage", which is 100V, which is the maximum voltage the MOSFET can switch.

There's "Vgs(th)", which is 4V, which is how much the gate voltage has to change in order to get the MOSFET to switch.

There's "Vgs(Max)", which is ±20V, which I'm guessing is the maximum voltage that can be applied to the gate.

Then there's "Drive Voltage", which is 10V. This is the one I don't understand. What does it mean?

Real MOSFETs are not perfect devices, they don't simply turn on or off with applied Gate-Source voltage. The amount of "ON" current through Source to Drain is a function of applied GS voltage. It is a steep function, but still a continuous one. This is an example of this dependence, from a tutorial: 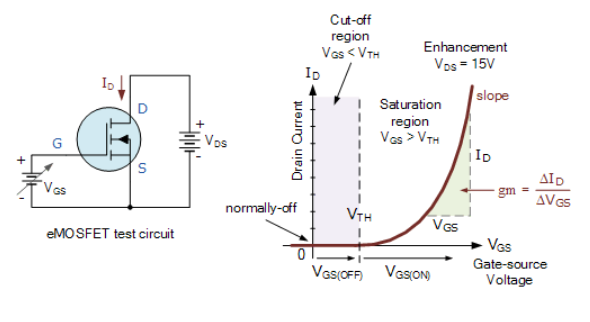 Datasheets for MOSFETs are trying to simplify this functional parameter by supplying "corner" points.

The V"th" voltage is the voltage where the drain current is barely measurable, in the OP case it is 250 uA, which happens at 4 V.

The "drive voltage" (listed as 10V) is the voltage when the MOSFET is conducting to full specifications, and can deliver 8.4 A of current and having the specified Rds(on) resistance of less than 0.2 Ohms.

To complement what Stefan Wyss correctly said in his answer, I'll give you the rationale for that parameter.

Power MOSFETs are often used for switching, that's why a low RDS(on) is important in switching applications. Knowing at which voltage you can attain that RDS(on) is an important parameter because you can tell immediately, without looking at the curves in the datasheet, if your circuit could drive that MOSFET fully on or not.

For example, if you need to switch a 10A load with an RDS(on) of no more than 10 mΩ, you could search for those parameters. But if that RDS(on) is attainable only at 10V, while you only have a 5V powered MCU with no other power rail, you know that that MOSFET is not suitable (or it will need additional circuitry to be driven).

The drive voltage is the gate-to-source voltage Vgs where the static drain to source on resistance RDS_ON is specified in the datasheet, usually at 25°C.

0
Drive MOSFET by a 24V input signal of an industrial controller
1
Does this MOSFET datasheet contain missing data?
0
Mosfet bootstrap voltages
0
UART LED Driver using MOSFET
0
Question about N-channel MOSFET turn on Voltage
3
How to read MOSFET datasheet to determine when the MOSFET is fully on
2
What voltage will drive this MOSFET best?
5
Optimal gate drive voltage for MOSFET in DC-DC