Role of "a current-limiting low-inductance resistor"?

While reading some experimental setup of a paper, I've came across with a statement saying,

To me who is not familiar with electronics, this sentence wasn't clear to figure out how "a current-limiting low-inductance resistor" is related to the stable operation. They didn't provide the circuit, but I guess it is in series, considering 'current-limiting'.

P/S is on the voltage mode(to keep the current the set value of 100 mA), and the current is from a gas discharge probably with some oscillating nature.

I got the meaning of 'current-limiting' which is a general role of resistor, however, can't understand how stable operation" is achieved with the described resistor.

I found LR circuit example , where time constant is given by L/R, so the low inductance will reduce response time. But, it seems controversy to me because if the circuit reacts quick for discharge oscillation, the inductance wouldn't suppress the effect of discharge oscillation. Then, doesn't make sense of the description 'to enable the stable operation.' And the example of LR circuit is kind of situation for DC circuit, and the page was explaining the current time history when a switch is closed.

I assume 'low-inductance' may somehow related, but can't clearly figure out alone.

I will appreciate if anyone could help me to understand.

** Edit - schematic which I assume is added. 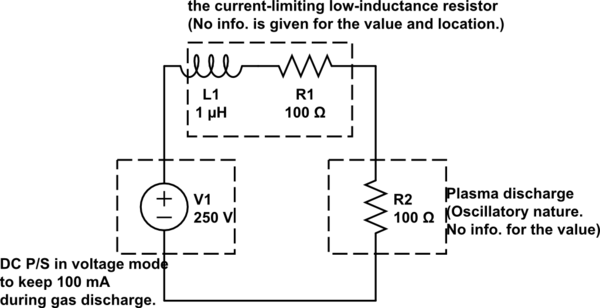 Without a circuit schematic, it's difficult to directly address the problem, but specifically calling out a low-inductance resistor (which are their own class of resistors) suggests that there is a capacitor or capacitance involved, not explicitly mentioned. This in turn suggests that the circuit is prone to ringing or oscillation, which are generally undesirable.

Ringing and oscillation are caused by the interplay of inductance and capacitance in a circuit, and if the conditions are right, your circuit might just go crazy.

The resistance of the low-inductance resistor presumably helps dissipate some of that energy that would otherwise go into the oscillations, while the low inductance would make the circuit less prone to oscillation in the first place.

Not the answer you're looking for? Browse other questions tagged resistors inductance stability or ask your own question.