On a relay coil, why use an MOV instead of flyback diode?

I briefly encountered a designer who wished to use an MOV instead of a flyback diode with a relay coil. I don't know much about the application, but why would you want to do that?

Using a varistor or a combination of zener diode and a normal diode instead of just a single diode has following advantage:

After turning off the coil of a relay the energy stored in the inductor should be dissipated (turned into heat) as fast as possible.
If this is not done the electromagnet lets go the contacts too slowly causing the contacts to wear much faster.
In addition the use case may require the relay release time to be as short as possible.

The energy of the coil is dissipated faster the higher the voltage across the varistor/diode.

As has been pointed out in other answers, the basic diode snubber arrangement extends the relay drop-out time and the speed of contact opening.

Figure 1. (a) Diode snubber. (b) Resistor snubber. The diode can be left out but doubles the power consumption of the circuit.

I checked a 24 V Finder relay in my stock and measured 800 Ω coil resistance and 2.8 H inductance de-energised and 9 H when the armature was pressed in.

We know from the maximum power transfer theorem that maximum power transfer occurs when the load resistance (R1) is equal to the source resistance (the 800 Ω of the relay coil). The reader can prove to their own satisfaction by calcuus that the maximum time delay will occur when the relay is short-circuited at the instant of power-cut. (For simplicity assume that D1 is ideal.)

Running this through a simulation results in the graphs below. 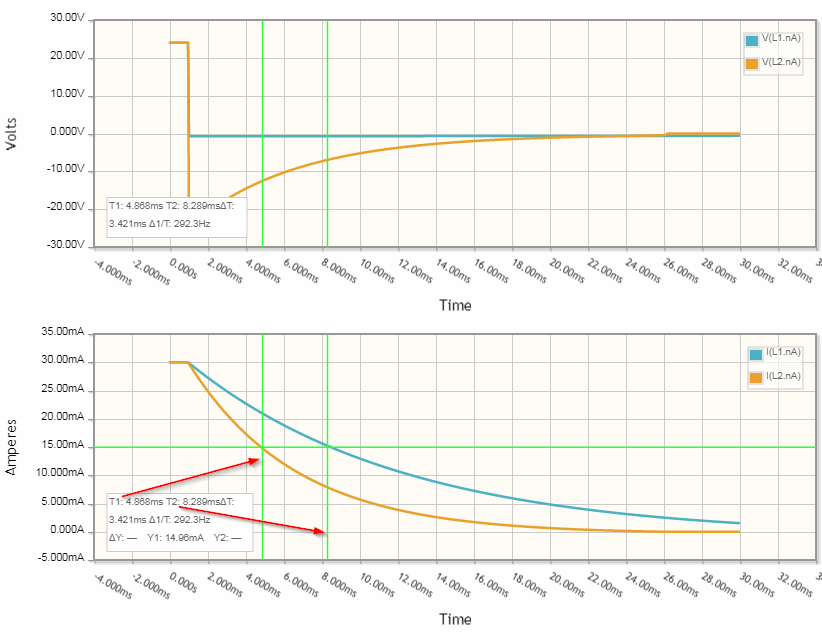 The relay will drop out at twice the speed for the resistor snubber.

... MOV instead of a flyback diode with a relay coil. ... but why would you want to do that?

If the MOV can be rated to break down just above the relay voltage then it may be close to the optimum relay load to minimise drop-out time. It may behave faster than a diode and uses one component instead of two as shown in Figure 1b.

I agree with that.

I think we've covered this.

One big reason to use MOVs over diodes or diode combos is polarity or lack thereof. Solenoid valve coils in their basic form are non-polarized and their connectors are often designed to be reversed in position for physical placement reasons. Using diodes in the connectors would polarize them so in connectors with surge protection, MOVs are used instead.

Reasons not to use only a MOV:

Reasons not to use zener diode + resistor:

You should ask that designer why (s)he wants to use a MOV while almost everyone else just uses a diode.

If the relay coil is fed with AC then maybe a MOV would be a solution but using AC to power a relay's coil is either rare or not allowed (for most relays as far as I know).

Next time, when someone suggests a weird/strange/non-standard solution, immediately answer: "Great idea, I am curious, why would you do it like that?" so that you can learn something new because who know, it actually might be a good idea. If it is, the person should be able to convince you with facts.

Not the answer you're looking for? Browse other questions tagged relay zener flyback mov or ask your own question.

6
Why would you bypass a zener diode in the flyback protection of a relay coil?
5
"A zener with series diode"?
0
Relay arcing protection for analog input

24
When/why would you use a Zener diode as a flywheel diode (on the coil of a relay)?
25
Correct use of Flyback or Snubber diode across Motor or Transistor?
3
Resistor instead of flyback diode
14
H-Bridge Fly-Back
8
Use of Flyback Diodes
10
Relay protection when proper TVS at load cannot be implemented
0
flyback diode across the relay coil
1
Flyback diode with 5V relay
0
Opamp delay off circuit check (updated)
0
MOSFET body diode and inductive load