I have an inductor coupled via coupling capacitance C_c to a transmission line with impedance Z_L. Given that the inductor has some internal losses and a capacitance, I imagine that for all intents and purposes it can be modeled as an RLC circuit. This gives a simple circuit shown below: 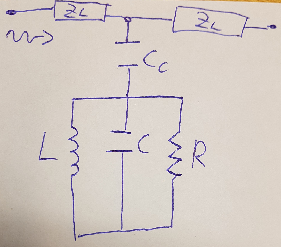 where omega is the frequency, E is the energy stored in the RLC circuit, and P is the power lost in the transmission line, essentially due to the coupling. But I have to admit, at this point I'm already starting to get stuck in relating it to C_c, C, L, Z_L. Could someone help me get started on how to continue?

Coplanar Waveguide Resonators for Circuit Quantum Electrodynamics by Goppl et al from 2008 looks at something along these lines, but this is not an identical system. They transform their circuit using Norton equivalences, but I don't think that is the way to go. However, if one were to take their figure 5c and make some adjustments, perhaps that helps? 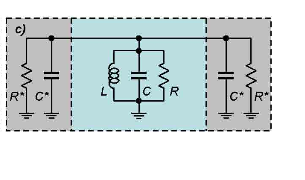 Taking the above with R* = R_L, C* = 0, and replacing C by the series capacitance of C_c and C, would that not be identical? In that case the external quality factor is given in the paper to be Z_L/2 times C_c C / (C_c + C) times the resonant frequency of the RLC circuit. I am not 100% sure this is correct; could someone help me out there?

The simpler answer is for a parallel filter, Q(fo)=R/X(f0) or real to reactive impedance ratio. Simply scale the frequency range to your desired range. Once you get the ballpark values, a calculator will give you better accuracy. However the material dielectric , Er(effective) properties, must be modelled correctly as a function of f.

This Q is trivial to lookup on a RLC nomograph and the series cap acts as a capacitive voltage transformer similiar to an inductive impedance transformer.