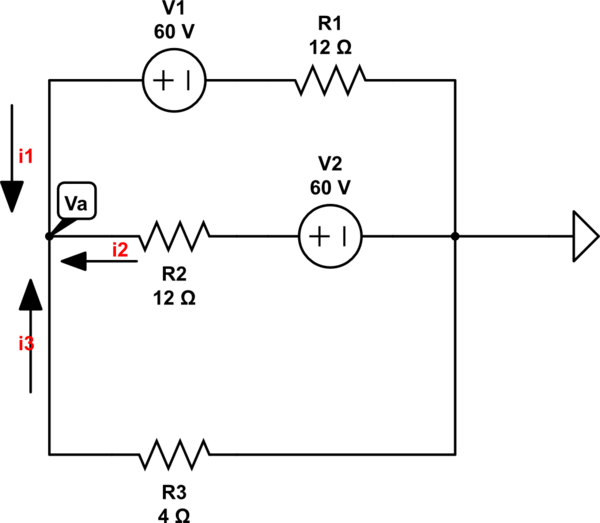 Those 60V sources are throwing me off. Appreciate any help. Thanks!

Since you are "familiar with nodal analysis," I'll approach your question from that perspective. Let's draw this up two ways:

(We'll assume that you can specify values for the three resistors and the two voltage sources.)

In the left schematic, the values of \$V_A=V_1\$ and \$V_B=V_2\$ are known, since you have them already referenced from the ground reference, directly. So the solution for \$V_X\$ using KCL (nodal analysis here) is:

Note that there is no difference. These two above equations are identical. And they solve out as:

But you could also have solved this as a resulting central voltage, given voltage sources with series impedances. The general equation is:

In this case, that would turn into:

Mostly, I just want to point out that there are lots of ways to approach the left side schematic. Keep your mind flexible. Look at things in different ways and find the equivalent approaches.

Solving these simultaneously (or solving the 2nd equation for \$I_{V_1}\$ and substituting that into the 1st equation) will provide the same answer as before:

The difference here is that you had to create a variable for the current (unknown, just yet) of \$V_1\$ and you had to recognize that there is a very direct relationship then between \$V_X\$ and \$V_A\$ that is created by the fact that there is a voltage source holding them apart by a fixed value.

It's an extra step. But the answer is the same.

The actual circuit is the same complexity, regardless. But being allowed to call a node "ground" and assign it the special value of \$0\:\text{V}\$ provides one way to help simplify the equations a little. And sometimes, if you move things around (without materially changing the circuit topology) you can simplify them a little more. But regardless of how you approach it, if the question being asked isn't changed and if the circuit remains equivalent, the same results should be obtained.

2
A problem with branch current method
1
Help understanding how to use Thévenin's theorem in order to solve a first order circuit
1
Why is the voltage across a dependent voltage source connected to an open circuit not zero?
0
KCL equation considering the leakage current
1
Set up KVL in a simple circuit
3
Is there a way to solve this circuit using superposition or KVL?
3
Analyzing a constant current source
0
Simple circuit analysis with node potential method