I have recently gotten back into electronics and have access to a lab with a signal generator and oscilloscope. I have been trying to teach myself how to use this equipment by building small and simple circuits.

Last night I wired a full-bridge rectifier on a breadboard. The diodes I used were EM518 diodes (those were the only ones that I could find in the lab). What I was trying to do was set up Channel 1 for the input (5VAC-RMS @ 60Hz). Then I wanted to set up Channel 2 to show the output ( ??VDC @ 120Hz). Below is a visual of how I set up the probes: 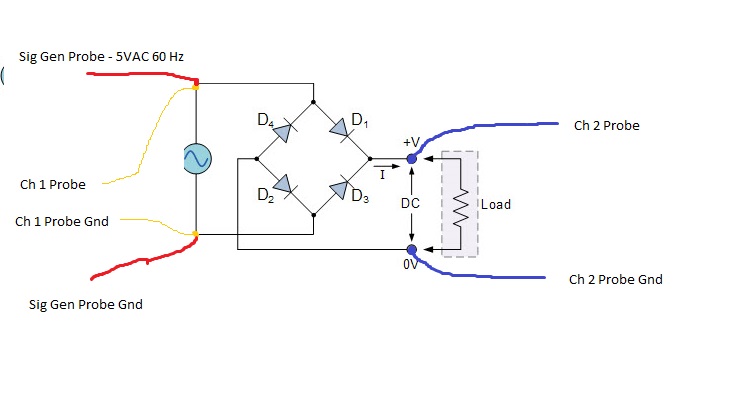 What I ended up with was a half-wave at the input and a half-wave of smaller magnitude at the output.

Why is this happening? Am I connecting the probe grounds the wrong way? After searching for how to properly connect ground leads, I am now more confused than I was before.

How is this done when working with circuits not connected to the mains? (I'll stay away from mains powered circuits till I understand what the hell I am doing).

If this truly is your wiring:

you are shorting out your DC- rail via your scopeprobe. This will short the supply as well. The local DClink is +- about the return of the supply. 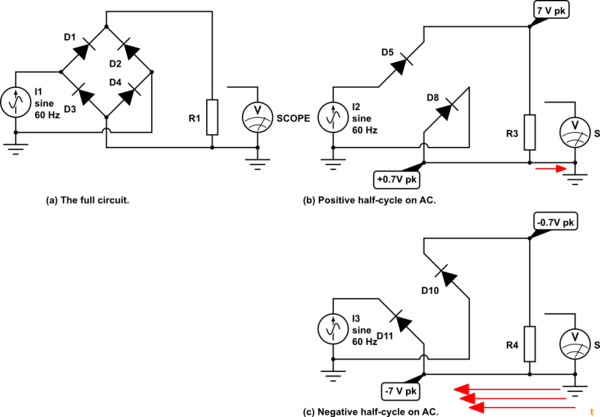 You can't connect your scope probes to two different potentials. Fortunately your power supply had limited current drive so you don't appear to have damaged your equipment.

With a more powerful supply you could draw very large current (red arrows) and destroy the earth traces in your test equipment.

Firstly, you need to know: 1. How diode works 2. What happens to the diodes connected in a fullwave bridge rectifier configuration

Now that we have explained how diode works, let us look as the fullwave bridge configuration. When you connect a function generator with a sine wave as input to the fullwave bridge assuming that first half of the period, T, is positive and goes from 0V to peak of 5V. From 0V to 0.7V, your diode, D1, will not turn ON. D1 will only turn ON and conduct when voltage is between 0.7V to 5V. Diodes D3 and D4 will be in reverse bias and remain OFF at all times. Similarly, D2 will turn ON to complete the circuit.

Your problem comes in during the second half of the period, T. During this time, your sine wave voltage is negative with reference to GND. Positive terminal of D1 is at a lower potential than its negative terminal - hence reverse bias. D3 will not conduct as well since the voltage drop between both its terminals are close to 0V.

Based on the explanation above, this most likely results in half wave rectification.