I'm so curious, What is the different of putting load series or parallel with resistor like below circuit 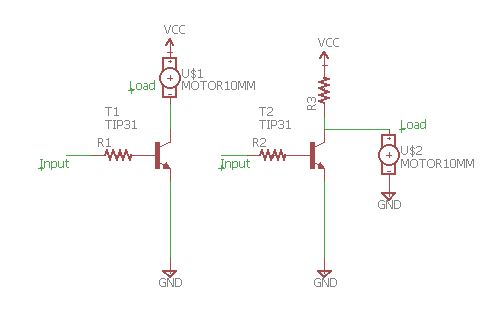 the circuit will be used just for switching circuit with VCC higher than the input Is there any correlation with current flow through the load? which is better for the switching?

if i use the circuit for the amplifier (of course there will be a Voltage Divider Biasing circuit and Resistor and capacitor in emitter), which is better?

When the transistor is ON the motor also turn ON and almost all the supply voltage Is given to the motor(except for the Collector-Emitter drop which depends on Collector current and may be up to 1V for this transistor if the motor draws large Current).

So,except for the drop on the transistor almost all the power from the supply is Given to the motor.Which is interpreted into more efficiency.Specially for Battery powered applications power dissipation is of great concern.

When the transistor is Off it acts as an "Open" and the current finds no other Path except through the motor.

But with Vcc supplying current to the motor Through the series connected resistor "R3" which drops an amount of voltage That's directly related to the Amount of current the motor draws and its(R3) Resistance value.Which leads to significant voltage drop across R3 and hence large power dissipation.

Also note that R3 prevents the motor from working with its full power since R3 limits the current through it.

All the above are interpreted into very low efficiency and waste of power.

For amplifier operation the second circuit is common because the quiescent point And the voltage gain all depend on the collector resistor which in the Case of the first circuit will be the load resistor and for all practical Purposes the load is not precisely known.

But if you consider the second circuit.You can choose the value of the collector Resistor to give you the desired gain and Q-point and connect whatever load you Want to the collector of the transistor without affecting the amplifier Parameters significantly,As long as, the load is within the allowed range.

In the first circuit, the transistor is acting like a switch that either applies power to the motor or it doesn't. If you want to switch a motor on/off, that's a good way.

In the second circuit, the motor is powered thru the resistor. That by itself is a problem since the resistor will drop some voltage and dissipate some power. The motor won't see the full supply voltage.

When amplifying signals, as opposed to switching power, a circuit like the second can be useful.

Not the answer you're looking for? Browse other questions tagged transistors amplifier switching or ask your own question.

2
Gain in Common Emitter Amplifier
0
Switching a transistor with audio output
1
Questions about the front end design of amplifier circuit
0
Voltage Gain decreases when load resistance included
0
amplifier design with npn transistor
0
Power Amplifier (Darlington) with Power and current limitation
1
Switching circuit transistor NPN, load has voltage and current though transistor is off
9
Capacitor in series with transistor base
1
PNP transistor switching and inductive load
1
In a class C amplifier, how does RB biases the base of transistor?