I'm switching on an LED strip power supply using an Arduino, but my relay has just started sticking. The relay switches the mains for a 5V 20A power supply. The relay board is this style.

The relay is apparently rated for 10A @ 250VAC, so I think should be fine for the continuous current, but I guess the inrush current when the power supply is first switched on is what's causing the relay contacts to fuse.

If I go with b) - does anyone know of a relay that would be up to the task? Ideally 5v with the same package as the ones on those boards so I can do a straight swap, but I'm guessing the ones that can handle the higher inrush current are probably a bigger package, right?

Edit: Here's a quick schematic of the setup: 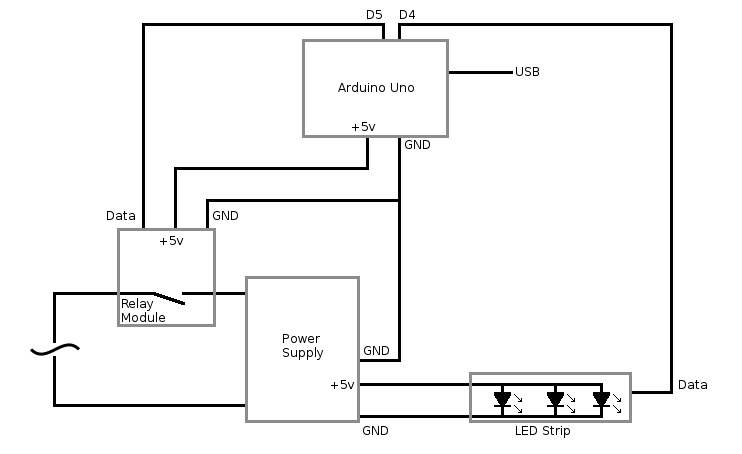 The reason I'm switching on the AC side instead of the 5V was really just for power saving, so that the power supply isn't on constantly, only when I want it on (when the Arduino signals D5 high).

The relay is sticking in the on position - the output stuck on closed and when the whole thing was unplugged (both USB and AC), I managed to give the relay a few taps and it eventually unstuck and opened up again.

I have faced this issue in past. An easy fix would be to move from relays to solid state switches. Use a standard triac with an optocoupler diac driver and you should be fine. I used BTB16 600BW and FOD420. If FOD420 is difficult to come by, MOC3021 can be used as well.

Since your output power requirements are less than 100 watts, the triac won't be supplying more than 1 A (in case of 110 V. For 220 VAC line, it will be even lower). I have tested the triac and it works comfortably without heat sink for currents up to 1 A.

In general, relays stick because the contact open when the voltage is high and a spark is generated across the gap. This spark results in damages to the contact or welding. This can be dangerous in certain environments.

I don't know how often your circuit turns on the relay so check your specifications to make sure it can handle the switching. For AC applications we try to make the make/break point near the zero crossing.

Search for spark suppression on the internet you will find literature on how to design a simple RC circuit to reduce the spark. Care must be taken to select components which are rated for your application.

Update The value of the R and C across the open can be calculated based on a simple equation which has been derived through experience where C = (I square)/10 with I equal load current. The open voltage across the contact R = V/[10*I(1+(50/V))] . formula by CC Bates.

There are relays with high inrush current capabilities upto 100A. For example check out the below relays which are 16A, 240AC rated (100A inrush) and comes in smaller size.

The other option would be switch to SSR, however you may need to understand their drawbacks like false trigger, heat etc.

You can reduce the current surge and prevent the contacts from welding by adding an "NTC inrush current limiter". This is probably being caused by a poorly designed LED power supply (normally there is one built-in).

Here is a training module on how to specify such a part (most likely they will specify a particular manufacturer, but you can search for others).

For it to be effective you have to allow enough "off" time for the NTC to cool in order for its resistance to go up so the next time the contacts close the current will be limited. They are designed to get quite hot at full load so the resistance drops to perhaps 1% of the cold resistance (and thus the losses are minimal when hot).

Not the answer you're looking for? Browse other questions tagged arduino power-supply relay mains or ask your own question.

0
Triac switch cause of heating