Activation of multiple LEDs with one or several transistors

I have to activate four LEDs at the same time when the signal varies from 0 V to 5 V. I still have not defined the transistor I will use, but before that I would like to know the best way to do this, with schematic 1 or with schematic 2: Activate all the LEDs with a single transistor or each LED to be activated by a dedicated transistor.

I know I should consider the current that will pass between collector and sender to determine which of the two methods to use, but I would like to know which one is the most correct. 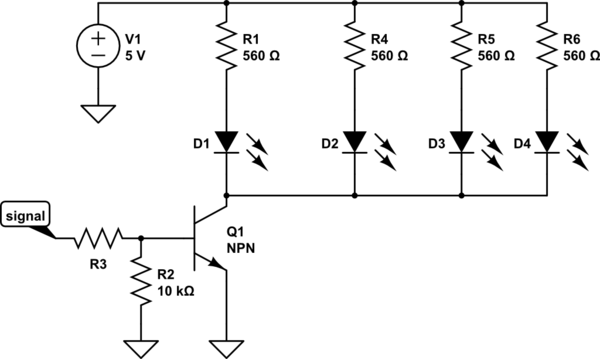 Both will work well. However, the second circuit is obviously more expensive to build (and takes more time to solder manually), so you will probably choose the first option (single transistor).

The second option (multiple transistors) can be a better choice when there is a lot of current going through the LEDs. You can then share the current through multiple transistors, which can therefore be smaller (sometimes, 4 small transistors are cheaper than one big, and the heat can be dissipated more easily). But given the currents involved in your case, it doesn't matter.

Either method works, but I would generally use the first because it is simpler and requires fewer parts.

If the signal is actively driven both directions, like from a CMOS digital output, then you don't need the resistor between base and ground. In other words, you can lose R2 in the first circuit, and R10, R11, R12, and R13 in the second.

As you say, the transistor in the first circuit needs to be able to handle the combined LED current. For four normal indicator LEDs, that is not much of a limitation.

Depending on the voltage of the LEDs, you might be able to drive two at a time in series with a single resistor. For example, if these are red with 1.8 V forward drop, and the transistor goes to 200 mV in saturation, then there is still 1.2 V left for a resistor to set the current. Doing that gets you the same LEDs lit with the same brightness, but with half the current used.

Green LEDs with 2.1 V drop are on the edge, but can work doubled up. Two LEDs would drop 4.2 V. Again, figuring 200 mV for the saturated transistor, that still leaves 600 mV for the current limiting resistor. Especially if you're not trying to run the LEDs at their limit, this can be a legitimate current savings.

Both circuits will work.

The first circuit is entirely adequate unless you value independent control of each LED.

The second circuit has the advantage that if desired you can turn individual LEDs on or off independently and the (obvious) disadvantage of requiring more components.

Assuming that your LED require 20 mA each, circuit A will require a transistor that can drive roughly 80 mA. Most transistors will be able to do the job without any problem.

On the second circuit, each leg of the circuit will require 20 mA. Again, this is not a problem for transistors.

From an engineering standpoint, circuit A is more cost effective since you need fewer components (thus reducing future board ''real estate'' and unit cost). The second one's main advantage is the ability to control each LED individually.

One way that you could perhaps improve on circuit one would be to pair up two LED per leg and reduce the resistor accordingly. That way, each leg will still be running at 20 mA, but you will reduce your total current by half and reduce the amount of voltage that is lost through each current limiting resistors.

This circuit is more efficient on parts, saving two resistors: 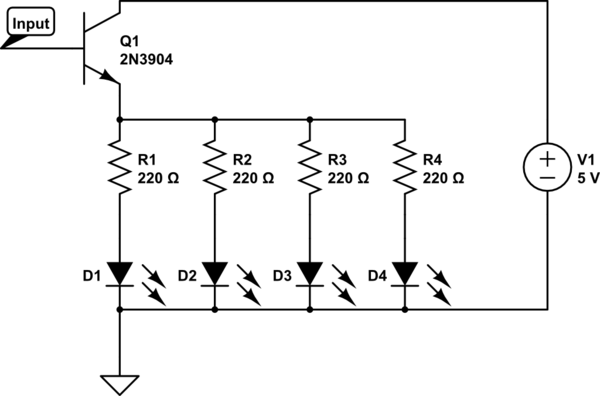 It's called an emitter follower. The voltage the LEDs see is the input voltage minus 0.6V. For this reason, you need a CMOS output which can drive close to 5V. A TTL output may need a pullup resistor to get it to go to 5V.

For a 5V supply, you want 220 ohm resistors for a decent brightness with red or green LEDs. 560 will work but it will be dim. Blue LEDs will need even lower.

From your questions, I get the feeling you misunderstand the circuits. Both are "electrically correct." If the question was: 1-which one is easier to build?, 2-which one has fewer parts (more reliable), 3-which one has more LED control?, etc. then you would be able to decide which circuit you should use. However, the amount of "current from the collector to the emitter," would NOT be a parameter to determine which circuit to use. This parameter is used to determine the current capability of the single transistor or of the 4 "equivalent" transistors.
If you decide to use a single transistor, it obvious that this transistor should be able to handle 4 times the current of each of the "four" transistors.

For example, each LED needs 15ma, then you need a single transistor that handles 60ma (min.), OR four transistors that each handles 15 ma (min.).

I hope that this makes it clear, that the current capability of the transistor(s) is NOT the deciding factor, to select circuit 1 or 2.

2
Transistor alternating between multiple LEDs
3
LEDs with two transistors very dim
3
leds in parallel, switched with NPN transistors
10
How can I effectively reduce the voltage needed to activate a transistor?
2
Bypassing Transistors with a Switch, problems?
2
Use Darlington instead of multiple transistors? If so which one?
1
Issue with driving multiple LEDs via transistors
0
Connect multiple, non-independent, RGB LEDs
1
Multiple infrared LEDs in parallel or series?
1
How to activate one LED separately in a group of LEDs?