Ground in an OP-AMP

The ground in an OP-AMP is not connected directly,Why? Here is the pin configuration of 741 OP-AMP...There is not a ground pin in this chip--

Can someone give me an intuitive explanation about why ground is not directly added in an OP-AMP?

To an op-amp, ground is an arbitrary reference potential, something that matters to the network of components surrounding the op-amp, and to the user of the op-amp, rather than to the op-amp itself.

What technically matters to the op-amp, are the power supply rails, which clamp the range of potentials where its inputs and output(s) can operate: sense voltage and produce output. Still, under normal operation, even the supply rails do not enter the op-amp's linear "equations" as a DC reference or some such (they can serve as a DC reference in the surrounding network of other components).

Note that in the basic op-amp-based circuit topologies, the transfer function needs the op-amp to have only three terminals: +in, -in and output. (Some special-purpose op-amps can have two outputs as well, but you can abstract from that for starters.)

It is an interesting question though :-) How can the op-amp not need a reference ground, if it has a single-ended ouptut? Or two outputs that are mere inverted copies of each other?

I haven't studied the topic academically... but I'd look for the answer in the theoretically infinite open-loop DC gain combined with the fact that any "asymptotically stable circuit" needs to use negative feedback in DC terms, which anchors the output to the inputs and to an external reference potential. Hence my void ranting about the reference potential being important for the surrounding network - or rather, for the topology as a whole, including the op-amp.

Voltage is a difference of potentials. Which you correctly acknowledge by asking "where the hell is my reference ground". The differential input senses a difference of potentials = voltage. So far so good. Now for the output... notice that the circuit is only stable and sane, if you add a (negative) feedback network, in terms of DC to start with. Which inherently references the single output potential to whatever reference point that you're using for the inputs. The DC reference point of your circuit can be a solid earth halfway inbetween your power rails, can be a synthetic gnd (created by a voltage divider), can be an arbitrary DC voltage offset, it can even be a power rail, if the feedback network (and signal) result in the op-amp's input and output pins to operate between the power rails = within their range of normal operation.

Or, consider what happens if you power an op-amp but leave its pins unconnected.

Either way, what makes the output stable, linear and sane? The simplest external negative feedback network, referencing the output and inputs to a common reference potential - can be a GND or can be arbitrary.

Ehh... I haven't provided any pictures.

Maybe try this intro by AD - ignore all text, just look at pictures 1-3, 1-4, 1-5. Check where the ground is, and where the input/output voltages are depicted (using double-ended arrows).

Sadly, that intro does not contain a picture of the "unity gain follower". Just check out the follower in the wikipedia. Oops, where's the ground? :-) Answer: the reference ground is your own mental construct here. If you speak about potentials (input and output) you don't need a reference ground :-) If you insist on speaking about voltages, or gain, just use whatever arbitrary reference ground that suits you, provided that you share that ground between the input and output.

Reference voltage is usually supplied, in some way, shape, or form, through an INPUT connection. Just because GND isn't assigned a pin doesn't mean that the finished circuit doesn't have a reference.

In fact, the functionality of the op-amp depends on the difference between the inputs and the feedback provided, so it doesn't really need a reference to work. the only place where some reference might be important is for valid CM voltage ranges on the input, and that is established from the rails.

The op amp's ground is implicitly provided via the power supplies that are connected to the op amp's V+ and V- power pins. Consider this resistive voltage divider circuit: 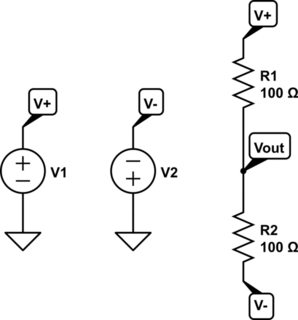 What voltage do we find at the node labeled Vout? The voltage potential at node Vout is measured with respect to some arbitrarily chosen reference potential, which is usually the "ground" node for the V+ and V- DC power supplies. The op amp circuit is no different. If we replace the resistive voltage divider circuit with the op amp, the voltage at the op amp's output pin is typically measured with respect to the ground node that serves as the reference potential for the circuit's V+ and V- power supplies, which are connected to the op amp's +V and -V power pins, respectively.

Some op-amp designs use the (-) as a summing input for multiple signals or for a signal plus an arbitrary offset voltage.

Other than meeting minimum and maximum voltage applied, the supply rails are 'outside' of normal op-amp equations for gain, roll-off, offset, etc.

Unfortunately many questions posted on this site have the supply rails out of spec with what the datasheet calls for, usually too low of a voltage.

At high frequencies, the original 741 circuit acts as if the internal reference node is -VDD. The compensation capacitor is referred to -VDD and that degrades the high frequency power-supply-rejection of -VDD to approximately ZERO ---- that is, any fast noise on -VDD appears on the output voltage of the opamp.

At low frequencies, the high-gain attempts to have the Feedback Network provide all the "referencing"; the virtual-ground behavior is expected to dominiate.

At high frequencies, with low-gain, the performance becomes a can-of-worms as all these behaviors interact.

Not the answer you're looking for? Browse other questions tagged operational-amplifier integrated-circuit ground or ask your own question.

0
Is there a specific preferred order of operation of signals?

23
What is "offset null" in IC 741?
5
OP-AMP outputs constant voltage with no inputs
0
How does the op-amp deals with negative inputs?
11
How does an op-amp know where ground is?
0
Adding a constant load to the input of an Opamp
0
Mains earth and op amp ground
0
741 Op. Amp.: Inverting input connected to output (pin 2 connected to pin 6). What does it mean?
0
Can every logic ic output be connected directly to ground or Vcc in any case?
4
Why does does the power supply in my op-amp circuit need to be connected to ground?