N-Channel Mosfet has full Voltage on all Pins (IRFZ44N)

The Panel itself uses 230V AC which goes to a rectifier (?) which outputs 35V DC and powers the LEDs successfully.

I then cut the cable going to the negative terminal of the rectifier, connected the part coming from the LEDs to the Drain and the rectifier to Source.

Problems I have and things I found out:

I am obviously missing something, but what?

I could not understand how you connected the MOSFET and LED load. Here's how you should connect: 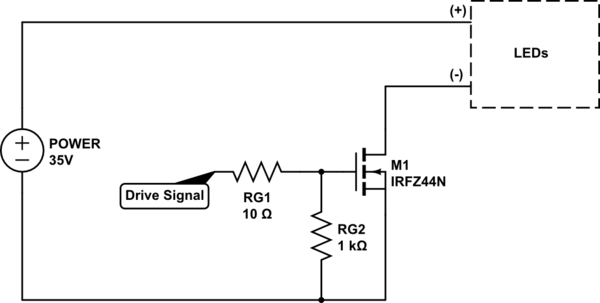 Please note that Gate Drive signal should have a peak voltage of at least 10V for proper operation.

Not the answer you're looking for? Browse other questions tagged mosfet switching ac-dc or ask your own question.