I can't derive a differential equation from this complex RLC network

So I was drawing arbitrary RLC networks and solving them as an exercise. But I came across this one and it seems impossible.

Specifically, I want to derive a differential equation that solves for \$i_2\$ (an equation with \$i_2\$ and its derivatives). 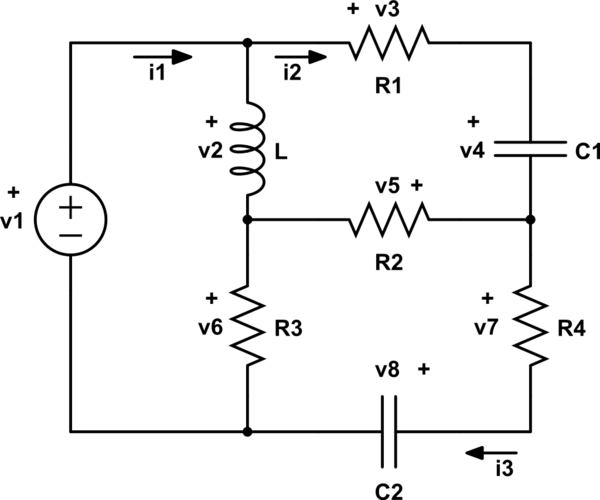 I really think nidhin's answer is the best way to go. Use the Laplace transform, calculate \$I_2(s)\$ and then convert it back into a differential equation if you're not interested in the solution.

I just did it for you to show you what you're up against if you try to avoid Laplace transforms:

The Laplace transform gives the solution (I used a CAS for this):

Yielding the differential equation of the form:

Where the coefficients are (I hope I copied them correctly):

I would not advise doing this without transforming to Laplace. While it is possible to solve it without, it can be very hard to see how the equations need to be substituted.

2
Nodal Analysis algebra simplification
1
nodal analysis - CCCS controlled by current from same node
0
How do I figure out the voltages at these 3 nodes of a circuit?
1
kirchhoff laws with current source connected in series to resistor
2
Trying to solve a circuit containing 2 current sources and 1 voltage source and resistors: what am I doing wrong?
1
Writing the Nodal and Mesh equations for large circuit and large supermesh
0
Circuit analysis - determine the voltage and current on branches
2
Nodal and Mesh analysis