I am trying to teach myself electronics, namely audio filtering, and I came across this circuit. Now with my limited knowledge the 'volume potentiometer' (that's what it is explained as) seems to be in parallel with the resistor forming the high-pass RC filter so would this mean that this circuit is wrong. I think that the output of each filter needs to be buffered and that those outputs should have the poteniometers on them? All the pots in the circuit are 10K Log's 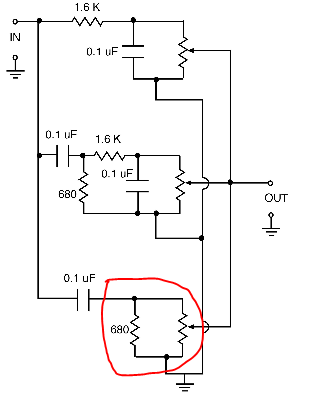 It's not the best example of a three way splitter (I doubt you'll see something like this inpractice, it's just an example), but 680 is less than 10k, which means the cutoff will be little influenced. The same for the others where the cap is in parallel with the pot -- at cutoff, the impedance is less than the pot (~1.6k). That's not to say they will not be influenced, here's how the three outputs look like when there's no potentiometer (R=1G Ohm), compared to 10k: 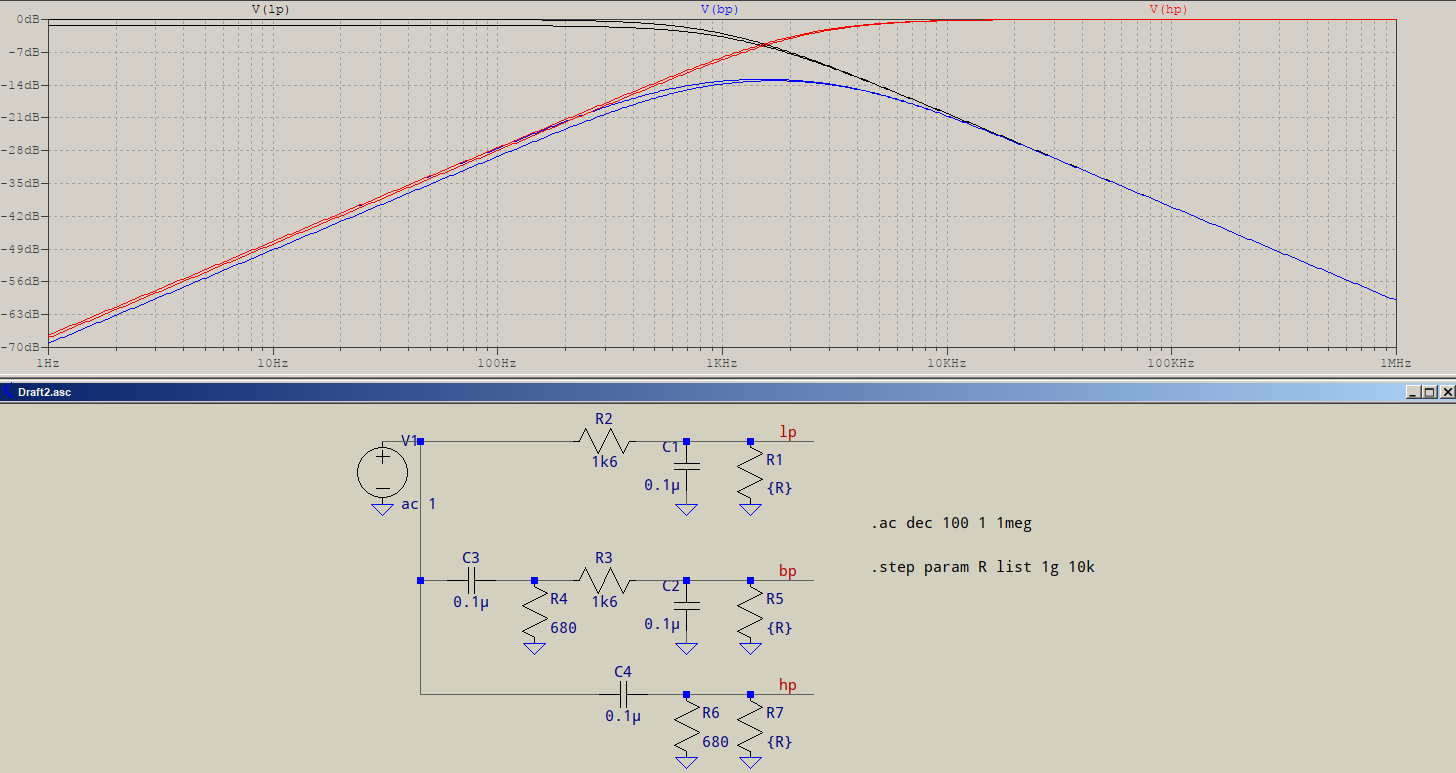 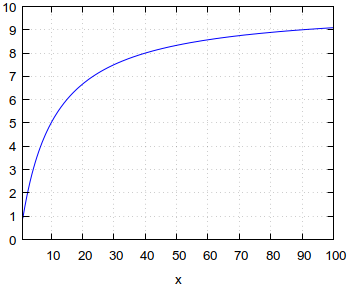 If the resistor is less than 10 (see the graph), the combined resistance drops significantly. If they are equal, 10 each, the resultant is 5, and as the resistor goes to 100 you can see the resultant value going up, towards 10, asymptotically. That means that, the higher the parallel resistor, the less impact it has.

Here's the equivalent schematic for the highpass case: 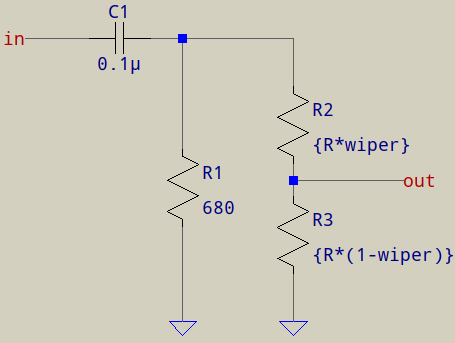 As you can see, the pot effectively becomes two series resistors, with their values set by the wiper position (here, from 0 to 1). At the output you have the input impedance to the next stage (considered larger). From R1's perspective, it "sees" the two series resistances, thus the whole potentiometer, which, as determined above, does not influence too much R1's value. And, at the output, you have R2 with R3 forming a variable voltage divider.

Not sure what you meant to say with this: "does not act as a 'volume' control for a fixed value filter", but buffering is the recommended way to do it because, as you can see in the 1st picture, despite the large value of the pot, it still influences the filter, even if only by a bit.

I think this question has been well answered already, however I want to add a few things.

First the actual question: why are there potentiometers placed in parallel with other components (specifically resistors where it will change the resistance as they combine)?

The circuit will be designed with the pots to form the correct cutoff frequencies when they combine with the fixed resistors. The cutoff frequencies won't move depending on the position of the wiper as the resistance with respect to ground is constant. EDIT: as noted in comments this is only true individually! The interactions are negative. See my last paragraph re: interactions.

With regards to buffering: sufficient buffering would be provided by simply adding a summing amplifier at the output node of the given circuit. This would prevent loading of the filters.

Further if you're interested in this kind of circuit, there are lots of interesting tone stacks from both old and modern guitar amplifiers, check out this website. They were designed with minimal cost and with older technology. Putting an op-amp buffer everywhere wasn't really possible, particularly before transistors were even being used! The sound of the circuit was designed such that the interaction between sub-circuits would yield sonically pleasing results.

Not the answer you're looking for? Browse other questions tagged audio passive-filter high-pass-filter or ask your own question.

1
Unknown potentiometer in schematics
1
Compensating for power loss through resistor in high/low pass filter circuit?
0
Adding a potentiometer before or after a passive filter
0
Choosing the value of an audio pot
0
RC Analog Filter Component Selection
1
Working principle of the AD8232 high pass filter