I have a string of 14 AGM batteries in series, when discharged at constant current, the voltage has a stair-like shape with respect to time.

The batteries are new but were stored for more than a year without charging. They were cycled again and the stairs "softened" a little.

The same stairs are also seen when charging begins.

Any recommendations to troubleshoot this (if possible) are very welcome.

Thaks for your help! 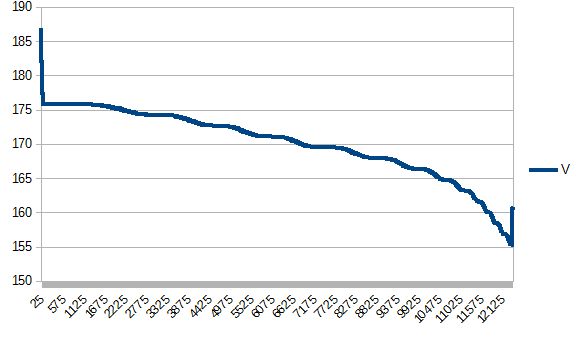 It is the batteries discharging in an out-of-order fashion, that is they are not discharging by equal amounts per cell. Per each unit of time one cell at a time is being drained more than the others until it no longer dominates the flow of current. The drain sequence then goes to the next cell with the most charge until it is drained.

What gives this away is that as the total voltage drops, the time between voltage drops becomes shorter as fewer batteries are left with a good charge on them.

In a way one battery at a time is 'punished' into discharging until it is equal to all except the next one to be selected because it still had some juice in it.

Based on this the discharge sequence is in no particular order except by battery charge and quality of its cells. At the end of the chart they put out short bust of current in turns until they are all dead.

I have seen lithium coin cells behave this way, and oddly enough long strings of opto-couplers used as a constant current 1.00 mA source. 20 of the H11D1 rated at 300 volts were in series with the 1,500 volt source but even with 1 M bypass resistors one opto tends to dominate control. They did not share equal amounts of Vdrop. Neither did these batteries as they discharged.

It is almost a quantum state in change on a macro scale. I counted 14 steps on the graph. 14 cells discharging in steps. Once a cell has discharged to a certain low level, they all 'agree' to drop the total voltage which starts another round of arbitrary discharging until all cells are at the next lower level. The meter drops in voltage and the next round begins. It continues until all batteries minus internal resistance go to near zero volts. In the end each cell will have a fractional voltage remaining for some time, until it leaks away to zero.

From the comments it seems that this is your problem. At 1.96V/cell the battery is considrered fully discharged. A deep cycle battery doesn't mean zero volts, just fully discharged. It still has a voltage. You are going below that where reverse charge happens to weaker cells. You might still recover some of it's capacity charging and discharging within the limits few cycles. Seethe source here: https://www.energymatters.com.au/components/battery-voltage-discharge/

It can be seen in your graph, if 5V/division that the first step is exactly at 24V where the discharge should stop. From that point a cell is certainly below zero state of charge and the it'svoltage quickly drops to zero and so on. By discharging below that you made the uneven charge even worse. In my defense , I was also misleaded by the "deep discharge battery" expression.

Edited due misinterpreting the graph pointed by berto.

Inside each battery the cells have closer state of charge and similar characteristics. The differences in state of charge between batteries are causing the 14 big steps that I counted. Inside the big steps, cells of the next weakest battery discharging uneven are the source of the smaller steps.

Not the answer you're looking for? Browse other questions tagged batteries battery-storage or ask your own question.