PS_ON to GND with MOSFET to turn on ATX PSU

i've built the following circuit to short the PS_ON to GND and turn on a PSU. 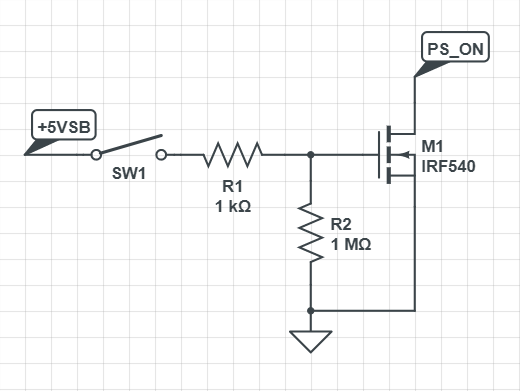 The problem is that, despite the pull-low resistor or the state of the switch, the MOSFET will always be on.

With this circuit i've also tried to turn on an LED and it was always on, just a little 'less bright when the MOSFET should have been turned off and I thought of a broken part, but the same happens with other IRF540 i have...

Any idea? I can't understand what I'm missing or wrong

I've never tried a mosfet to do this, but I've used a 2n3904, no emitter or collector resistor, with just a 1.1K resistor on the base between the transistor and switch.

but in those, I used a latching flip-flop before so I could use a momentary switch.

Is it possible you have misinterpreted the pinning for your IRF540. The behavior you are seeing is similar to what I would expect if you has the source and drain connections interchanged. In that case the body diode forward biases and your load looks always on.

2
What is the correct way to interface 3.3v logic with the PS_ON# 5v signal on a standard PC power Supply?
0
DC Motor driven by P-MOSFET stops after half turn
0
ATX power supply doesn't turn off after PS_ON wire is disconnected from GND
0
What could be the reason an ATX PSU triggers OVP?
2
High-Side P-Channel MOSFET Won't Turn Off!
1
ATX PSU turns off under heavy 12V load, unless increased gradually
0
ESP32 grilled with simple MOSFET switch for 12V water pump
0
Power an RS550 motor using an ATX power supply