How is this simple circuit working?

I'm trying to understand why this simple circuit below works the way does: As it gets darker over the photoresistor (RP) the LED gets brighter.

I'm trying to understand it by following the path the electricity takes through it (from - to +). 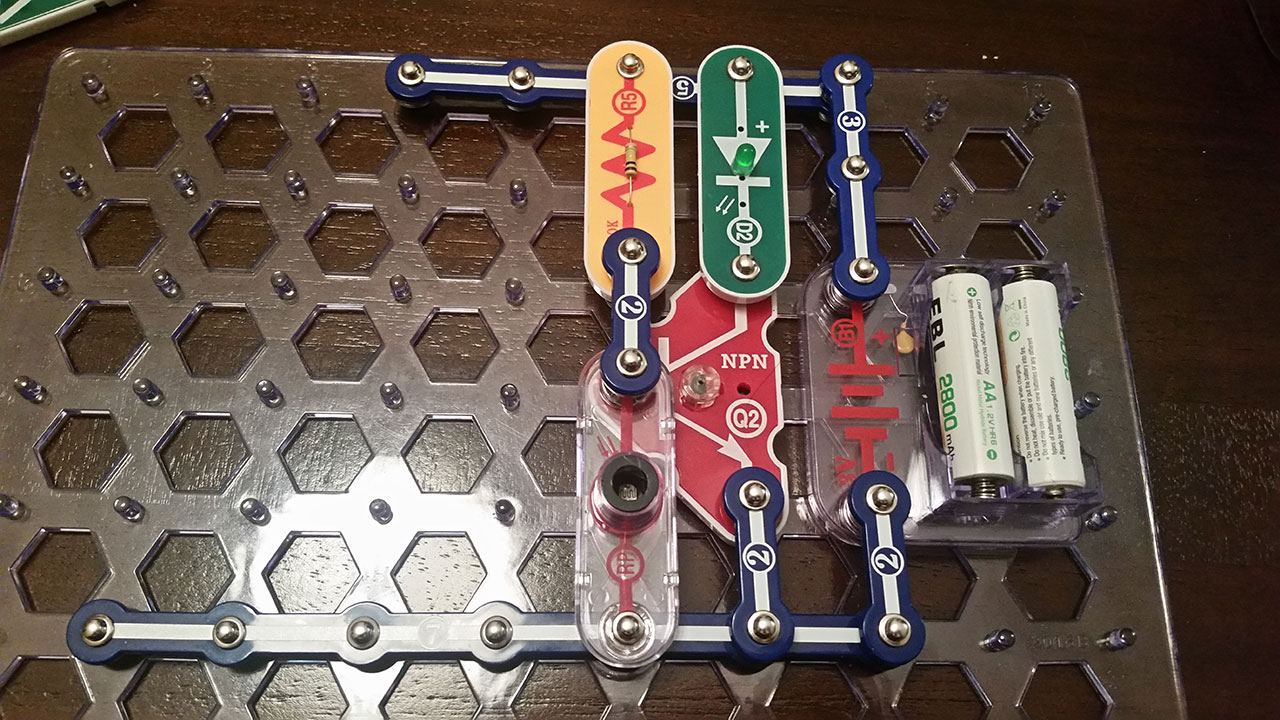 Your circuit is the following: 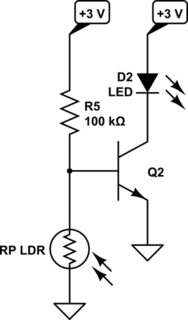 This solves out so that the LED is on (active) roughly when:

So you can see that at some point your transistor will turn on sufficiently when the ambient light is dim enough. Before that point, \$R_5\$ will still be able to supply enough base current to \$Q_2\$ to keep it ON and therefore \$D_2\$ will be ON. Below that point, the LDR is sinking so much current that there isn't enough left over for \$Q_2\$. So \$Q_2\$ gradually turns OFF when the ambient light is strong enough.

For a more "crisp" turn on/turn off behavior you can try the following schematic: 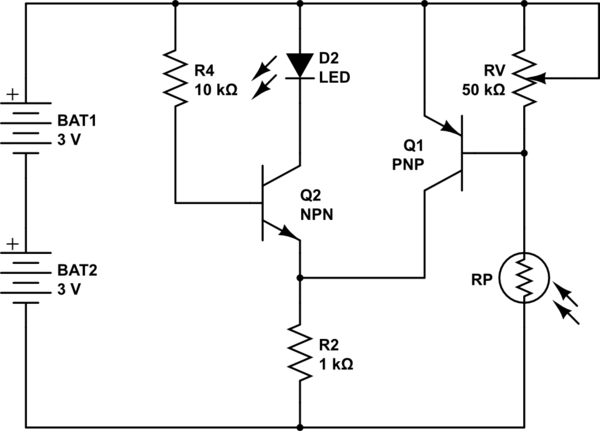 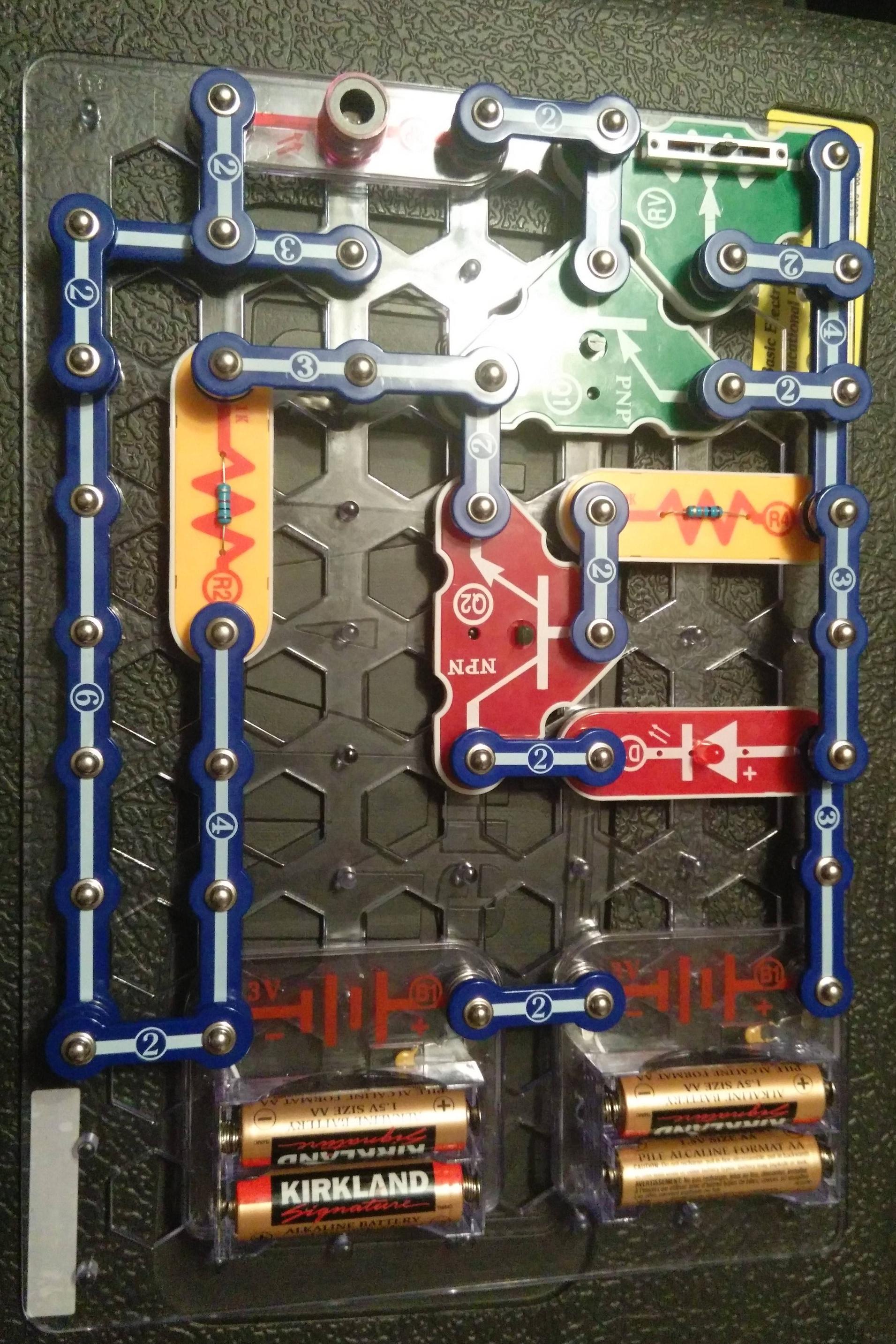 You can adjust the threshold with RV.

You are basically correct, but it is the base where the voltage rises as the room gets dark. The emitter rises as well but is ~0.65 volt lower.

This means the gain/beta/hFE of the transistor is important as to how sensitive it is. A old transistor with poor gain (10) acts as a load to the photoresistor, thus more darkness is needed to make the LED bright.

The photoresistor has a wide dynamic range of resistance, so this is a good circuit to practice with in terms of transistor gain vs. bright/dark room, etc.

Your intuitive explanation is correct.

More formally, a transistor (the red NPN in that case) will start to transmit when the voltage on the base (in between the yellow resistor and the photoresistor) is above 0.7 volts.

The equation to calculate the base voltage is: Vb = Rphotoresistor / (photoresistor + Ryellow) * battery voltage

Like you predicted, if the photoresistor value become really small compared to Ryellow, the Vb will at some point fall bellow 0.7 volts and the transistor will be completely cut off.

That is a simplified version of what could really be going on. In reality, the base current will modulate the current that is passing through the Collector (the top of the transistor). The smaller the photoresistor, the more current flow through B and more importantly through C.

To conclude, the transistor can take different state: it can be cut-off (not letting any current flow between the collector (top) and the emitter (bottom), it can be in active mode (letting a current flow in between the collector and emitter proportional to the current flowing through the base) or it can be in saturation where the collector current for a given circuit is maxed out and an increase in the base current will not create an increase in the current circulating on the collector. The LED can be powered in the active or saturation mode. If the LED is powered in the active mode, chances are that you will see a dimming effect before a complete power off if the light change is slow. switching between saturation and cut off will act like an on/off switch.

To read further on transistors if you're interested: https://learn.sparkfun.com/tutorials/transistors

I hope this helps you getting started and I hope I was clear enough in my explanations.

2
Does any current flow through C-E of NPN BJT when the base is floating?
3
Controlling LED with microphone input
5
Basic help with calculating values for PN2222A LED circuit
0
Designing transistor logic gates
3
How does this automatic emergency LED work?
0
Understanding simple circuit with two transistors and one led
1
Photo resistor night light not working
2
Can someone explain how this oscillator circuit works?