Is LED properly implemented in the constant current circuit?

Consider this simple constant current source. The voltage is 27 V, yet the indicator LED is rated to a much lower reverse breakdown. Is the LED safe?

Will the LED draw current away from the output load? Output would be less than 1.5 mA.

Simulations in LTSPICE proved LED won't lower output current below 1.5 mA but I don't know for sure. 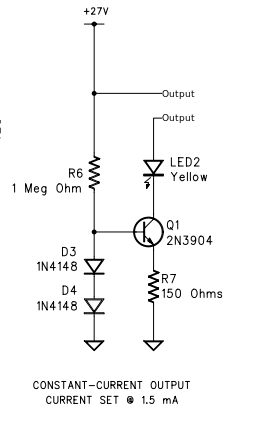 The LED is not exposed to any reverse voltage, so that is not an issue. The 2 diodes with Q1 and R7 form a constant current sink. As long as the LED source voltage is 5 volts or more (up to the 40 volt rating of Q1) and R7 is 150 ohms the current will be 4.33 mA, even if output is tied to +27 volts. You could put 5 LED's in series and still the current would be fixed at 4.33 mA.

Typical round 5mm LED's usually have a maximum current of 20mA, so R7 should not be less than 43 ohms, which gives you 15 mA for the LED (Very bright!). A typical 47 ohm resistor for R7 would give you 13 mA of current.

The math is simple. The 2 diodes provide a fixed 1.3 volt reference to the base of Q1. The base-emitter junction of Q1 drops that by .65 volts, leaving you with a fixed 0.65 volts at the emitter and across R7.

So if all things stay the same then adjusting R7 adjust the constant current at the Q1 collector. Even if you bypass the LED Q1 will only sink 4.33 mA.

By the way, if the LED has no connection to power then the circuit has no current flow. If the LED output were shorted to ground (with no power attached) then there is no harm. The collector of Q1 cannot source current, or less than 1 uA if it leaked from Q1 base which has a 1 M resistor for a current source. Worst case would be .027 uA, which is not enough to do any harm.

0
Help me set constant current to 1.5mA output and LED to 20mA