Removing pull-up resistors from breakout board

I use VL53L0X breakout boards for distance measurement on I2C, each with built-in level shifter and pull-up resistors (10kΩ, as measured). As I connect many of those on a single bus (5 and more), I need to remove the pull-up resistors to keep the total resistance above some critical value, about 1.63kΩ for 5V, as explained here, so that i2c low-level voltage does not go above 0.4V.

I would am not sure I identify correctly the resistor on the board and how to remove it. It is a cheap board from ebay, so of course no schematics and so on. The board looks like this: [![board front][1]][1] [![board back][2]][2]

This is a better back picture from Amazon: [![enter image description here][3]][3]

By measuring resistances, I could identify the resistor as the one "103" (not EDI -- edited; thanks) in the middle, which is a 4-way resistor. It seems to be connecting more things together, so I think if I remove it completely, the board will stop working altogether. Is it doable "by hand" (I do have that fine tip for soldering but not much experience with miniature soldering)?

I appreciate any hints, I have numerics background, this is new to me :)

Is it [possible to remove the I2C pull-up resistors] "by hand" (I do have that fine tip for soldering but not much experience with miniature soldering)?

I think I've reverse-engineered the schematic for your board (it would be easier with the board in my hands) - and then I found a schematic online for a similar (though not identical) breakout board to yours, which fits with my analysis.

So I'm fairly confident, but you have the board in your hands and I don't, so please check my assumptions.

The bad news is that, as you know, your board wasn't designed to allow easy disconnection of the I2C pull-ups. Although it's easy to disconnect the pull-up from SDA, it's a little harder for SCL. My approach requires a sharp scalpel to cut traces and a small jumper wire needs to be added.

I've found a slightly more in-focus photo of your board from one of the many Ebay sellers, so I've marked the changes on there: 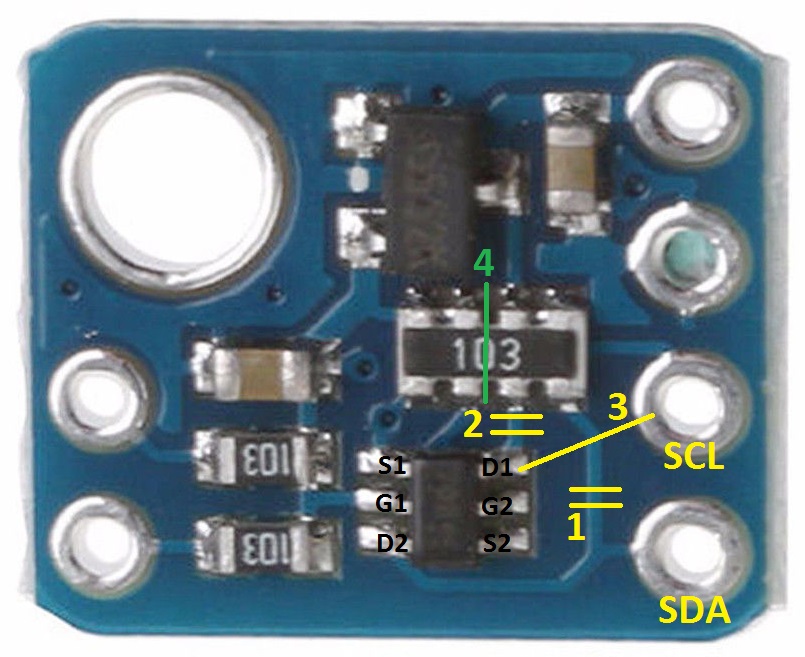 There are a number of ways to approach your requirement. I'm assuming that you want to make minimal modifications to the breakout boards. 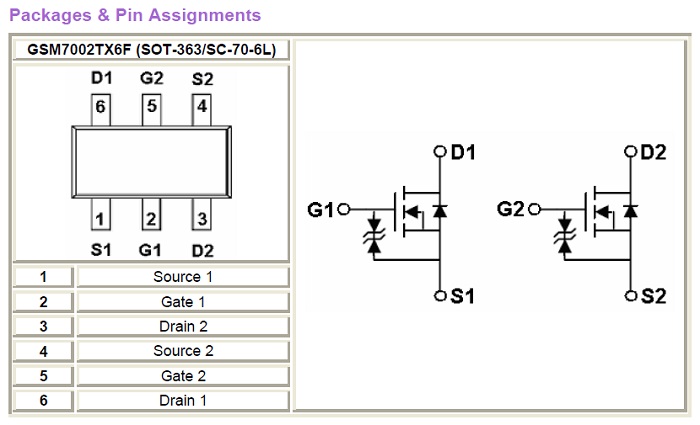 Provided the few critical parameters (especially Vgs) are suitable, then other dual N-channel MOSFET devices could also be used in that location, so I expect there are a variety of other top marks on those devices used on the various breakout boards. The purpose of that device is as a typical level-changer (level translator) for the two I2C signals, since according to the VL53L0X datasheet, it should not be connected directly to an I2C bus which is pulled-up to anything above 3.5V e.g. a 5V I2C bus.

Then you can add one suitable pull-up resistor to each of the two I2C signals, as appropriate for the whole I2C bus. Job done!

Later, I found that Pololu make a VL53L0X breakout board and they supply a schematic diagram: 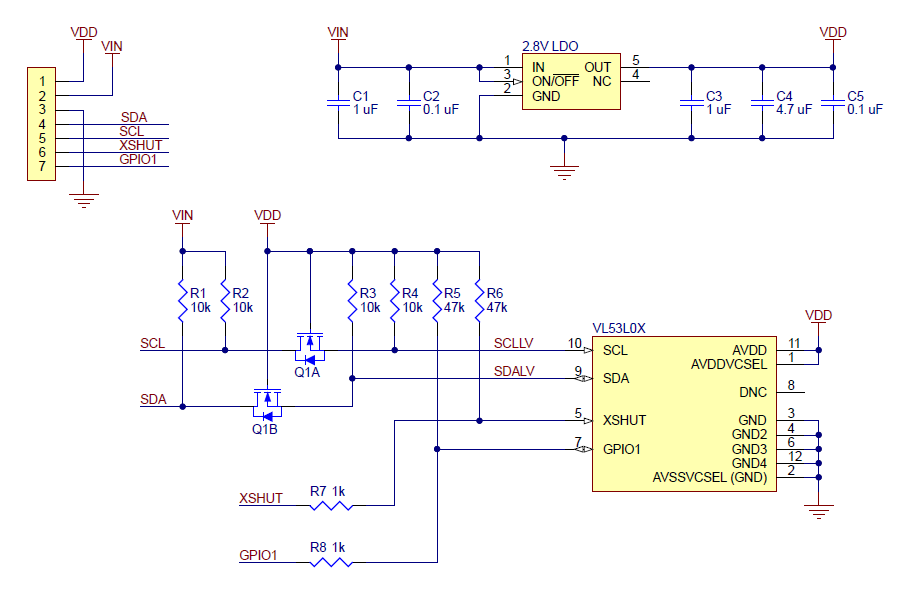 That schematic nicely shows the use of the N-channel MOSFETs as level-changers. It is not completely accurate for your board, but the differences are fairly small, e.g.:

From a quick comparison:

I have no association with Pololu, but their documentation is always far above the near-zero information from Ebay, Ali Express and Amazon sellers etc., so I have been a happy buyer of their products.

Based on the excellent answer by @SamGibson (and his comment with suggestion), I realized the VIN trace is only used to feed the voltage regulator and those two pull-up resistors. So I could cut the trace in location 5 (after VIN goes to the regulator) and 1 (which disconnects SCL and SDA from each other through 2x10k resistor on the right of the 4-pack); the rest of the board is consuming regulated 2.8. For cutting, micro-drill is very good, better than Stanley knife. I am now running 7 sensors on one bus without any issue. Works perfectly. 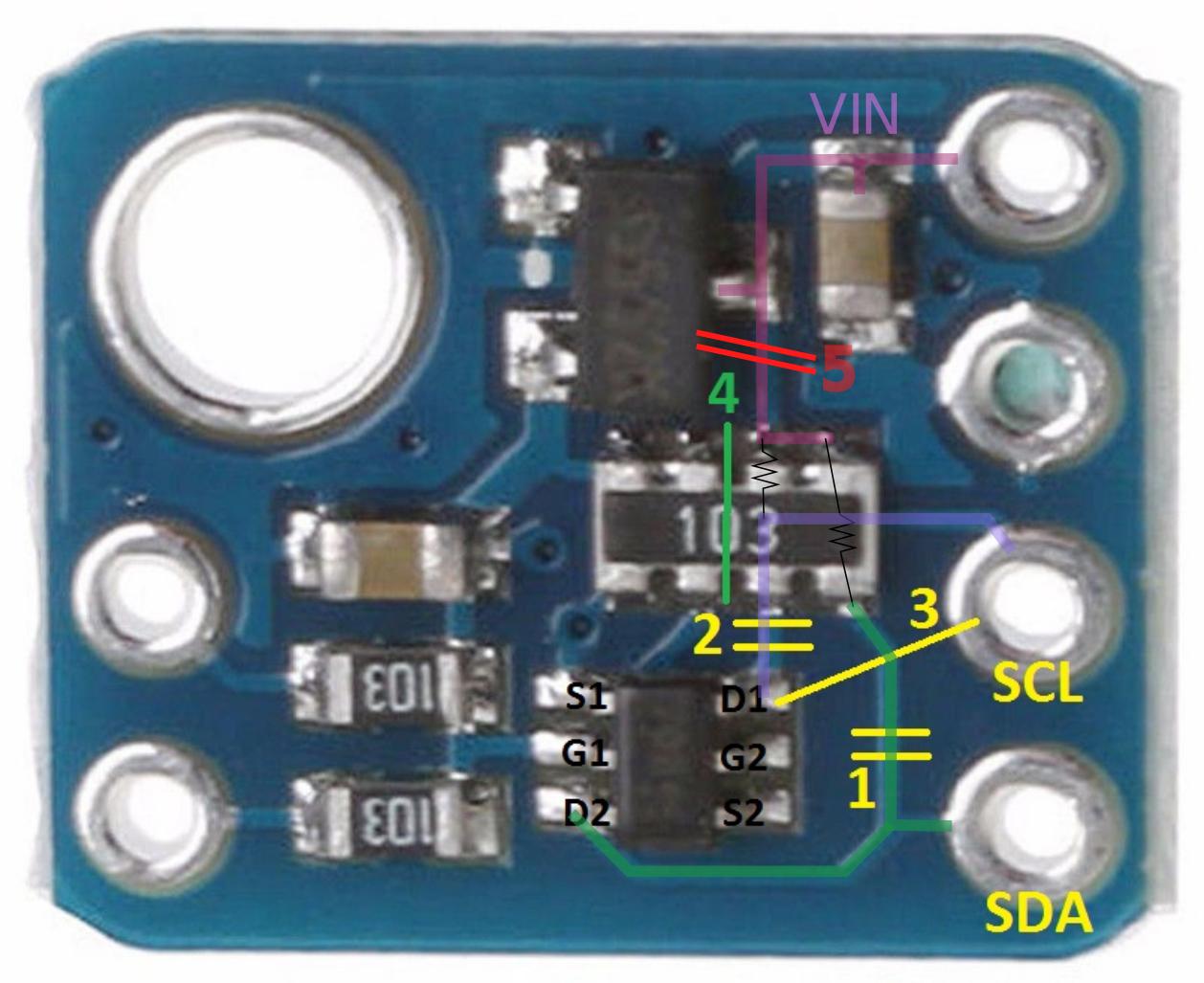 Not the answer you're looking for? Browse other questions tagged resistors i2c pullup breakout or ask your own question.

2
i2C : pull-up resistors “design pattern”, Shielded cable and connector?
2
How the pull-up resistor settles the logic level?
7
Why are there so many resistors in a typical schematic?
4
Use GPIO for switchable Pullups of I2C
0
Creating a breakout panel for a Raspberry Pi GPIO lines
2
Pull-up resistors required on both side of level shifter?
0
I2C with 1.8V levels without level shifters?
0
What resistor should I use for connecting seven segment to Arduino?
0
First Arduino Board Design
1
Can I use a Dupont cable with a resistor soldered in the middle as a pullup resistor for I2C comms?