Do some soldered components use solder that only melts in temperatures higher than 480 °C?

(solved - solution added at the bottom)

While some solder seemed to have melted on a few pins, the other pins didn't seem to be affected. I tried applying flux, and I tried adding more solder with the hope the old solder would stick to the new one. I tried placing the soldering iron on each of these pins for 2 minutes and nothing helped.

Is it possible that some solder will not melt under 480 °C?

An image of the almost destroyed area: 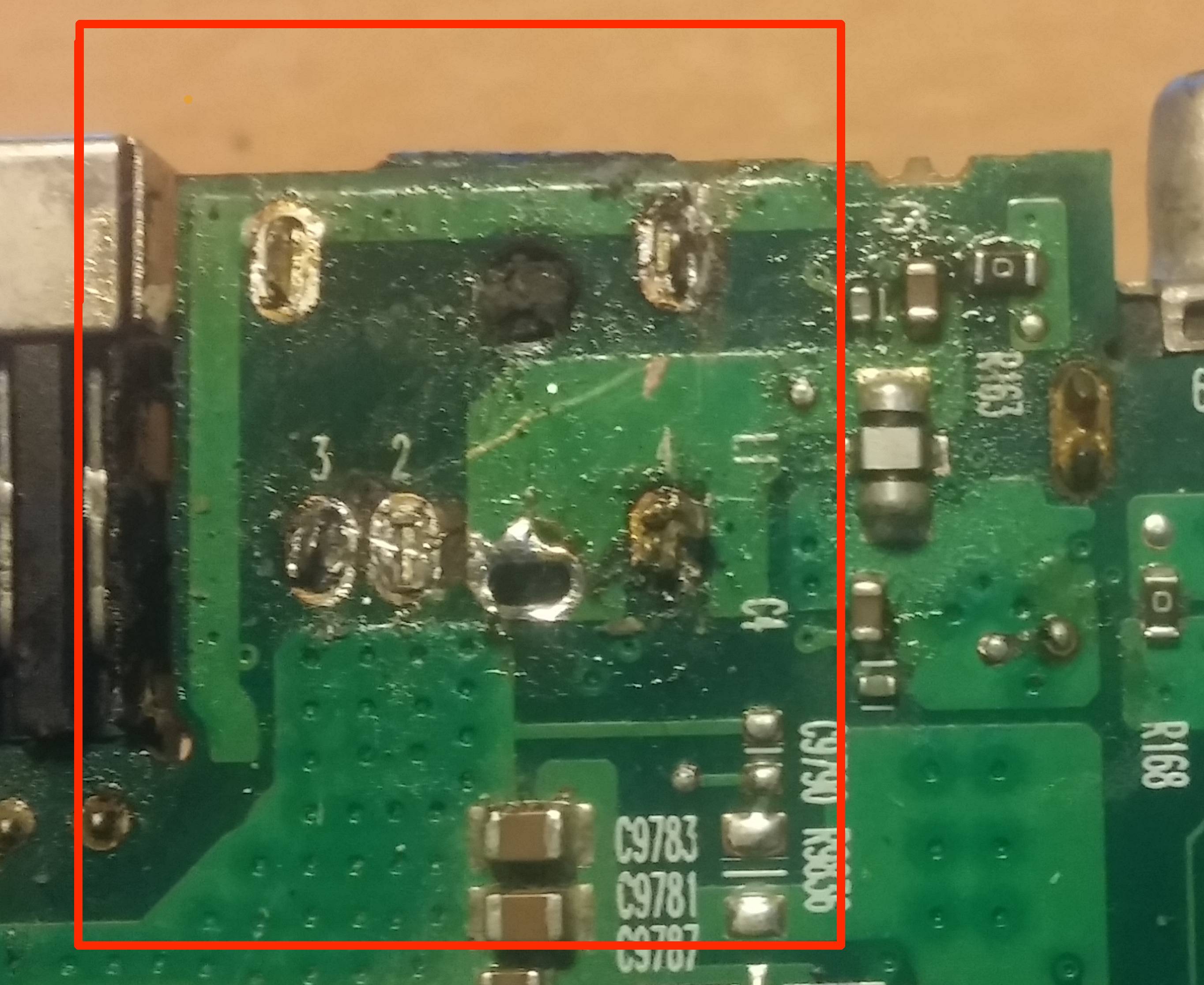 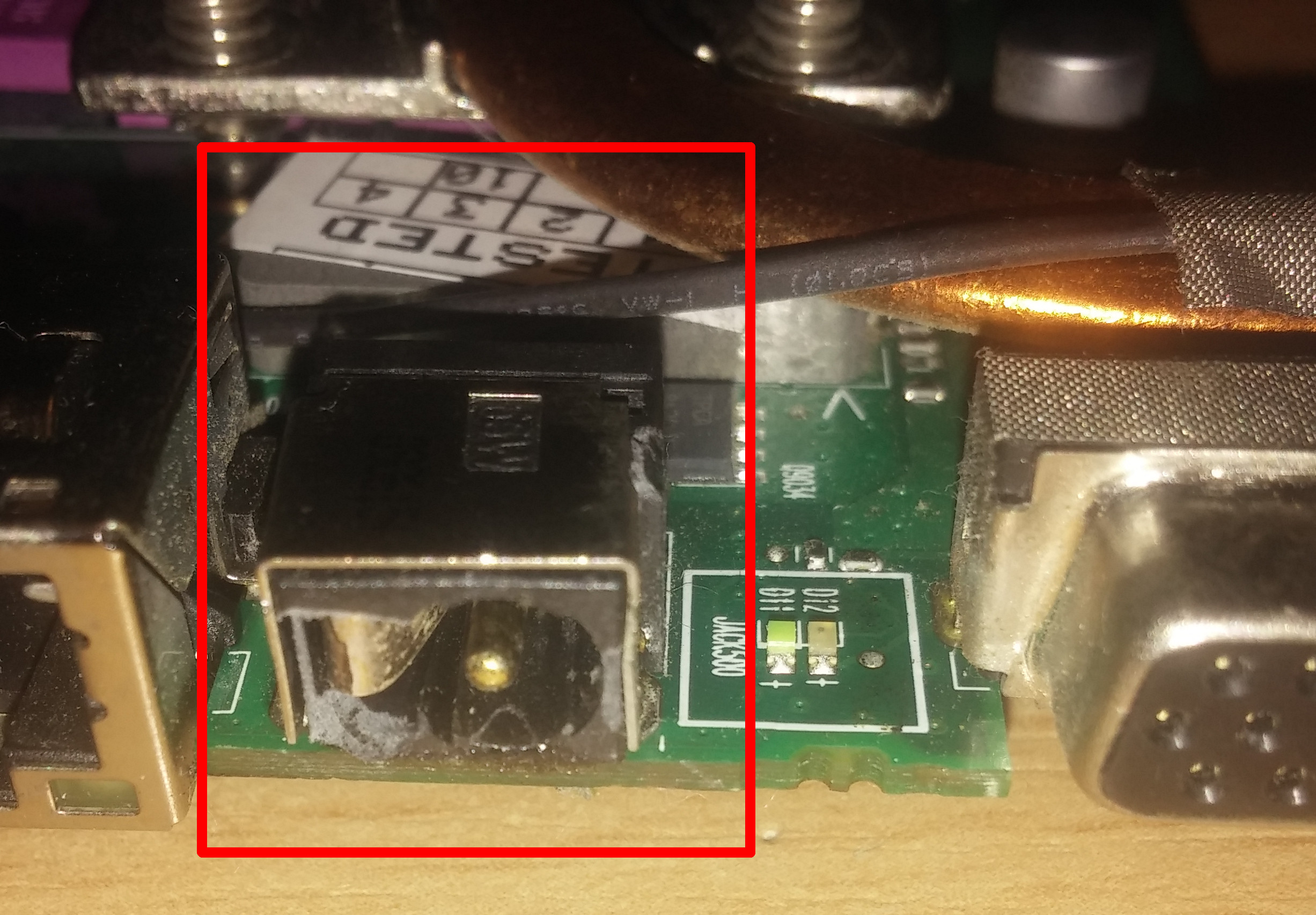 My soldering iron photo added as requested in the comments 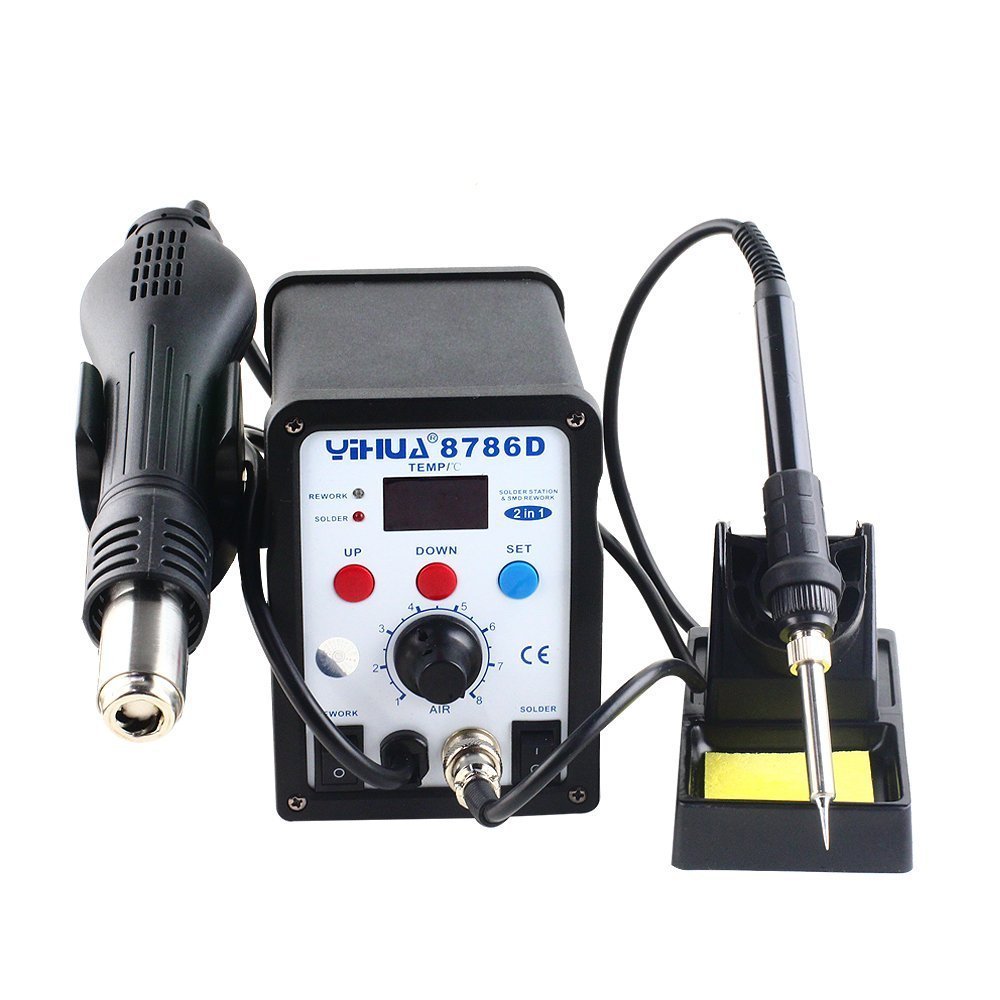 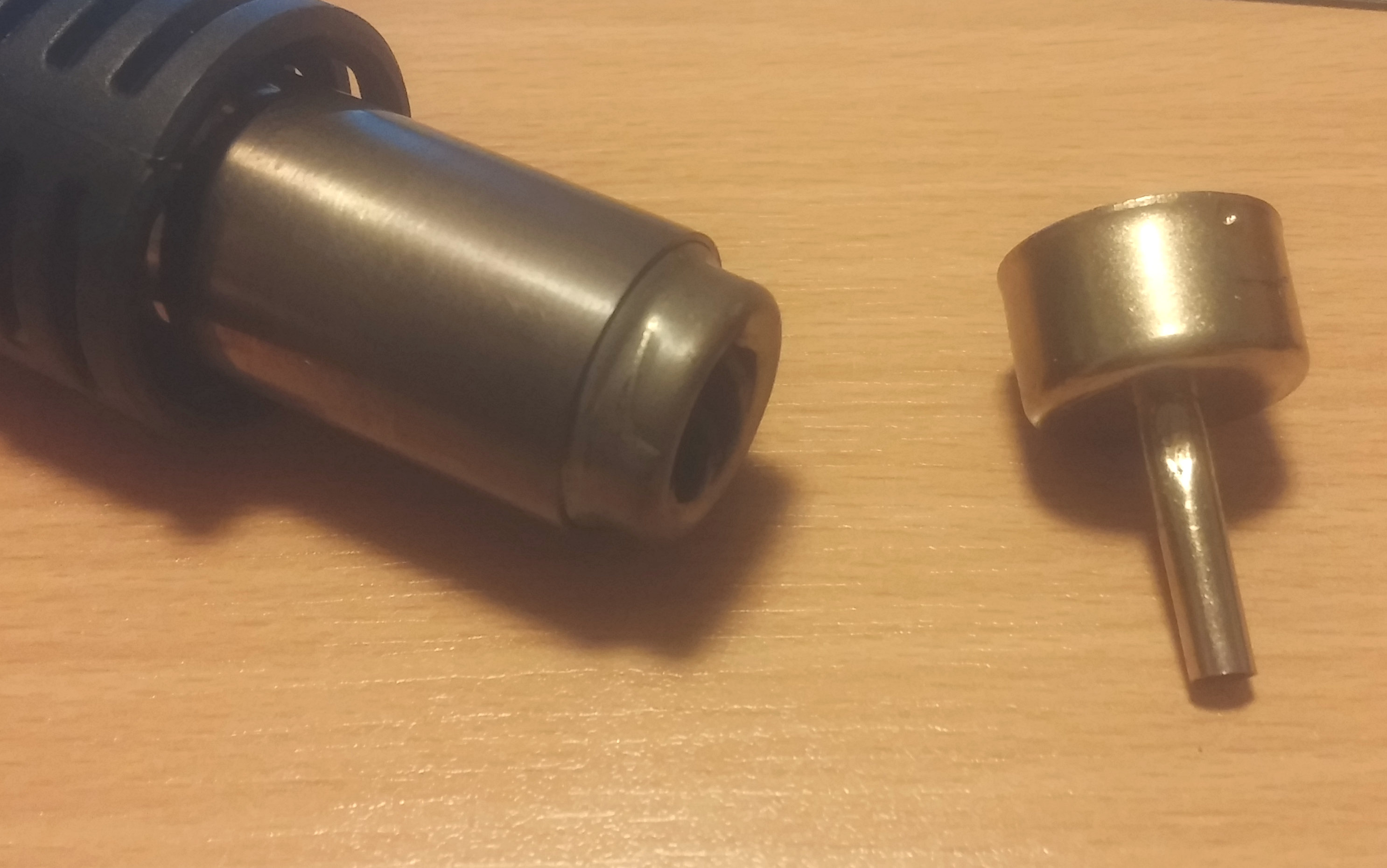 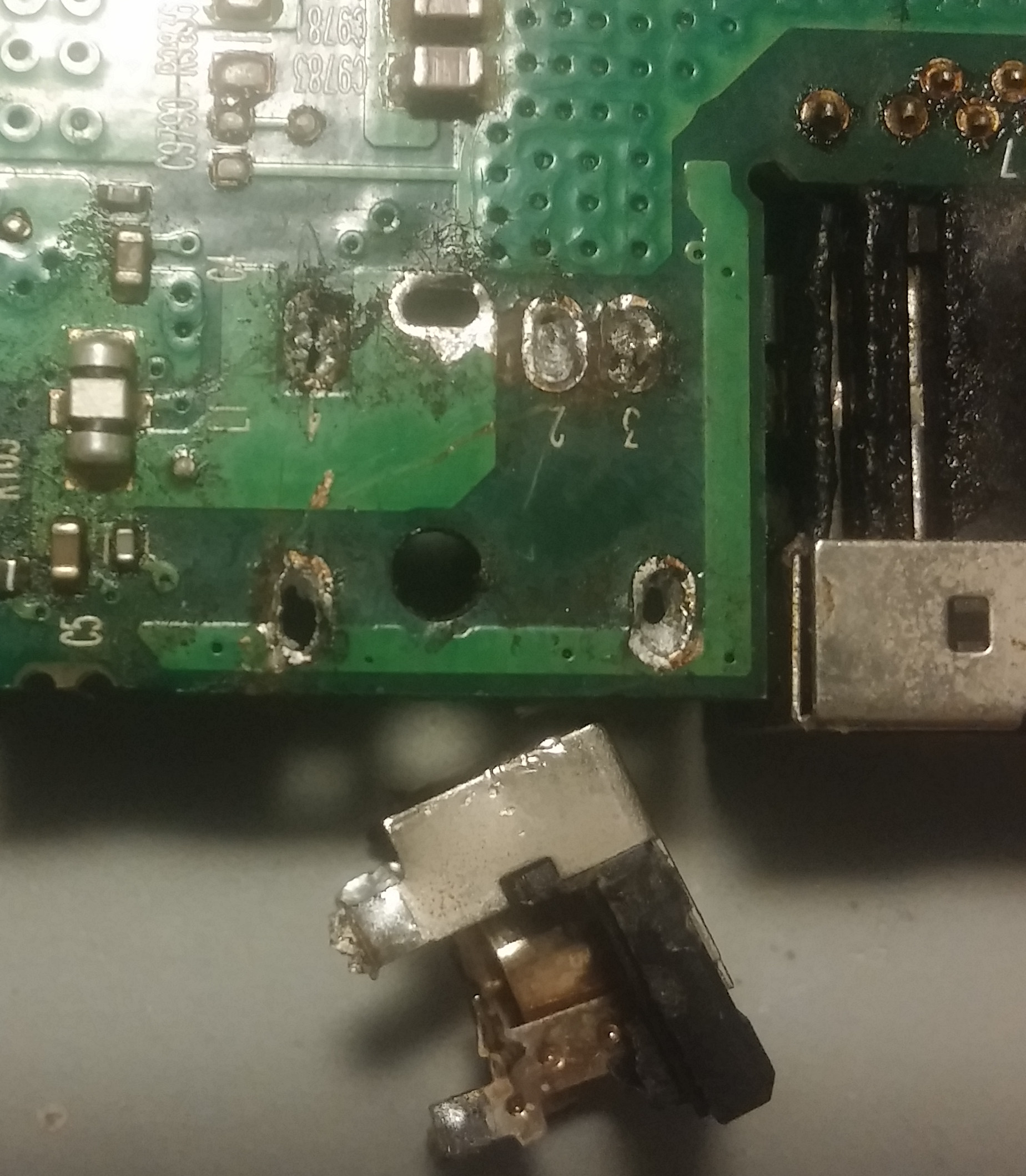 I'll use current as an analogy for heat flow. From Wikipedia:

All the following circuits are simulatable, you can run the DC solver and it will give you temperatures in "Volts". :D

A VERY rough model of your current setup

Lets assume 50W == 50A. I Guessed a total thermal resistance so that the reading on your soldering stating would give 480ºC. (unit for thermalr sistance would be K/W, I'm ignoring ambient temp and a lot of things, but anyhow). 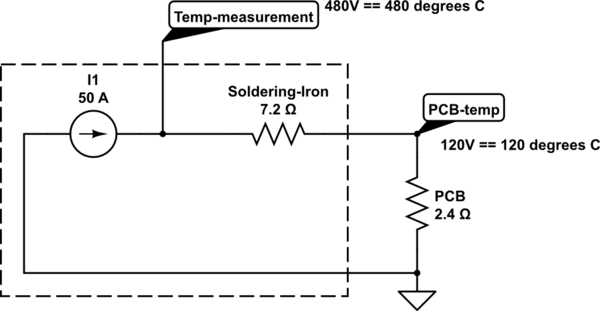 How to transfer more heat to the board?

Lower the thermal resistance of your tip! That's how tinning your tip to get more surface, fatter tips, etc help. Let's say 2.4K/W is the absolute best tip you can get. Still, 50W is not enough to reach a solderable temperature. (But see that the proportion of temperature got better, you are at 50% of the tips temperature now instead of 25%). 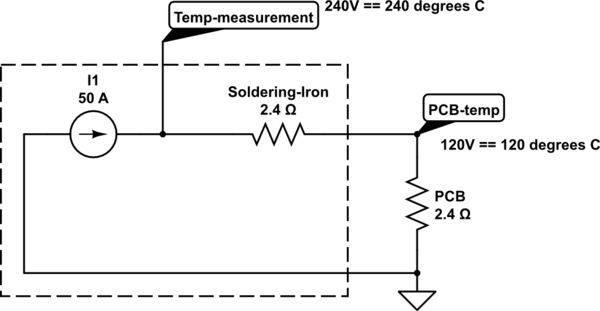 What would more Watts give you?

Since 50W is not enough to heat very low thermal resistance objects (big planes of copper). You add more power until you can reach 480ºC at the reading point. Note that if the object had higher resistance you would need less power. 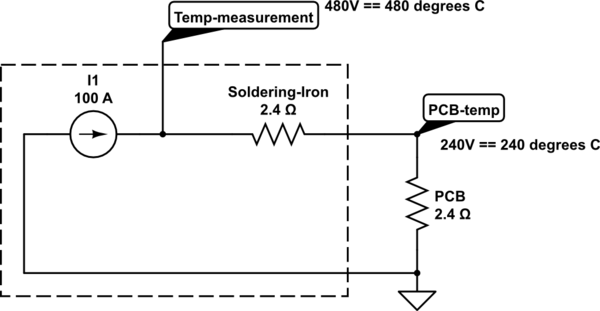 I think this would a very rough model for a pre-heated board: 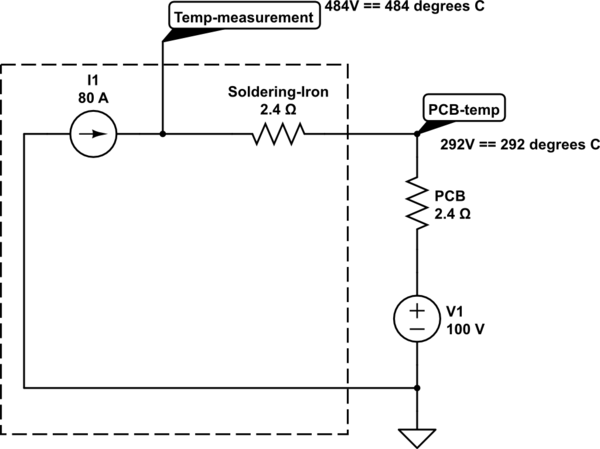 Note how you need less power than the previous example AND that the temperature "proportion" is better.

So in essence, when dealing with heavy temperature sinks:
- More power is good if you can deliver it without losses.
- To lower the losses: a fatter tip, better contact, no wind.
- Higher target temperature: preheat!

Some stations (I use an ERSA i-con) have internal presets for different tips, because they have profiles of temperature loss and transfer and try to compensate for that.

See that it has 2 numbers: 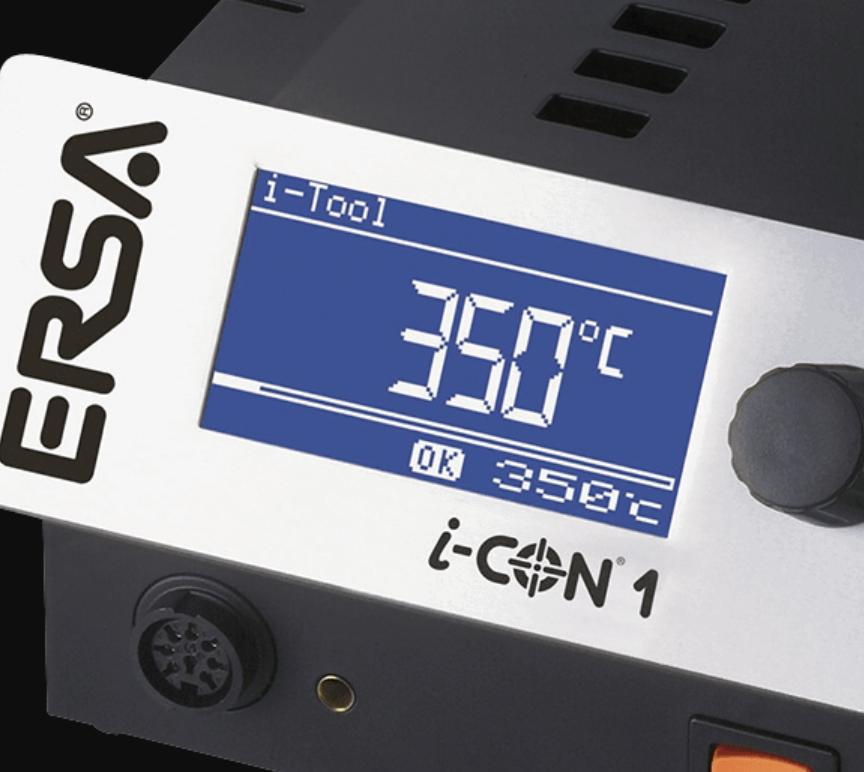 Both read 350ºC, but one is the sensed temperature, the other is the set temperature. So, in case that the power is not enough (As in the example that only reached 240ºC), you could read it out. IRC, those chinese soldering stations blink between sensed and set temperature, but I'm not sure.

No, it will be standard solder. Whatever was used on the rest of the board. The problem is that all the metal is conducting the heat away too fast. Also, large number of pins will mean that even when the solder melts you have to pull the (now very hot) part off the board, which is not easy.

One solution is to use a coping saw or similar to slice up the jack, and pliers to crush and break the plastic parts. If you can reduce it to individual pins soldered into holes you should be able to remove them one by one.

The high power hot air guns you get for stripping paint would also get everything hot enough, but might overheat or blow away nearby components if they are not protected somehow.

I also think it should be possible to use hot air and soldering iron to do this, but it would be tricky. You need a large tip to get the heat flowing, and adding more solder can also help transfer heat. Use the hot air to preheat the jack, and surrounding area of the board - ideally from both sides. Use tin foil to protect nearby components from the airflow.

A bigger wattage soldering iron will help but in the end if there is just too much metal that does not work either. A hot air gun in combination with a soldering iron is more appropriate for removing components with a lot of metal or if you have large PCB copper areas.

Standard tin-lead solder melts at 183°C, lead-free melts somewhere around 221-225°C. Your problem is it doesn't reach this temperature, because the amount of heat you put in is too low, and the amount of heat the board and connector copper mass sucks out is too high.

If you use higher temperatures, like your 500°C paint stripping air gun, yeah sure this will put more heat into the board, but unfortunately the parts that do reach this high temperature will delaminate, and your board will be destroyed, because the temp is too high. When blowing hot air on a board, the large masses of metal will heat slowly (ie, your solder won't melt), but the plasticky bits will heat quickly and risk burning. It's better to use a high air flow rate at a lower temperature, than a low flow rate at a higher temperature. Hot air works well, but it requires a bit of practice.

Solution to your problem, in Ghetto mode. 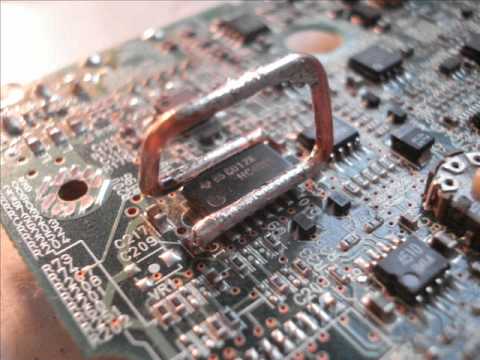 Use a bit of thick copper wire to bring heat to all pins simultaneously. Pictured here is a chip, but it will work on lots of components if you bend the wire in creative ways. Even capacitors, and other stubborn 2-3-pin thru-hole components! For example, to desolder a thru-hole part with 2 or 3 legs, simply place a bit of 1.5mm2 (AWG16) copper wire along the pins, and heat. Keep it short, add enough leaded solder to conduct heat into all the pads you want to melt, then apply a high-power soldering iron, like a 100W dumb soldering pistol or a temperature controlled iron.

All the pads will melt at the same time. This works like a charm, in a few seconds. It's quick, so the board doesn't char.

Your problem is that the board is a motherboard that is multilayer- it has ground and power planes within that heavily draw heat away from the plated-through holes surrounding pins as you are trying to melt the solder holding them.

You need a good soldering iron, not one set to a high temperature, to provide enough watts to heat the solder to the (normal) melting point. For this it should be set to a moderate temperature, but be capable of delivering many watts on demand (with closed-loop control).

As others have said you may have better luck with your current iron if you physically break apart the connector and try to remove each pin individually. You can also preheat the board with hot air, set to perhaps 120°C, but do not use an uncontrolled paint stripper type of heat gun or you may well damage the board or surrounding components.

You might try indium solder. It will alloy with the tin/lead and give you an alloy with a much lower melting point. There is probably something on YouTube showing how to do this.

If you are using the conical soldering iron tip shown in the photo then you need to change it to a different one, probably a "2.4D" tip. A little investigation should enable you to find one that will fit your soldering iron, it will probably come with several other tips - there is no need to get too many other tips, or ones with fancy coatings.

The idea is that a conical tip has very little contact area, so it cannot transfer heat quickly compared to a larger tip. You need the heat transfer.

I found a video showing all the different ways that don't work to change the tip on YouTube: Mounting 900M-T Soldering Iron Tip on Yihua SMD Rework Station.

For completeness, welding connections that cannot be undone with soldering equipment DO exist in (mostly professional) some niche electronics, as does the use of especially high-melting-point solders (eg for downhole equipment).

However, in your case, it is almost certain that there is simply too much heat sinking from the thermal mass of the component itself, as other answers suggest. Try using a larger tip, a larger/stronger iron (keeping a cheap plumber-type iron around for such situations is useful), and probably adding some thermal mass and heat conduction by ADDING molten solder to the joint you are trying to undo.

Clarification: "Downhole" is some category of oil well exploration equipment, that defies all normal rules on what kind of heat electronics can take. Operating temperatures where normal solder would actually melt.

Not the answer you're looking for? Browse other questions tagged soldering soldering-iron-station or ask your own question.

1
Cutting off metal anchor legs on an HDMI port or Metal connector? What to use?

1
Desoldering from a graphics card
7
25 W soldering iron not working properly?
5
Removing solder effectively
1
What is the type of solder used in a playstation 3 (PS3)? And its melting temperature?
0
Fan cools solder down too quickly
0
Low temperature solder
2
Soldering iron melting plastic switch
12
What mad solder type is used for BGA?
2
Soldering question
0
How powerful of a soldering iron do I need for this job