I'm working on designing some hopefully simple RF (912 MHz) attenuators. I need a few different levels of attenuation but each different attenuator can be fixed.

I have prototyped one using just off the shelf resistors in a T-pad configuration that gives me a decent level of attenuation (pretty flat 19dB) when I perform an S21 measurement using my network analyzer.

However, the smith chart is all over the place when I measure S11.

Now I should mention that my prototype is very shotty. Basically I took apart a coaxial cable and hand soldered in some close-to-calculated carbon 5% resistors in between the two SMA connector ends.

My questions are as follows: What is a Smith chart and how do I use it to improve my attenuator+cable design? Is this a feasible method for creating basic fixed RF attenuators given that they don't need to be super accurate and only need to function over a very specific range of frequencies (905-920 ish MHz)?

As always, thanks for your help. 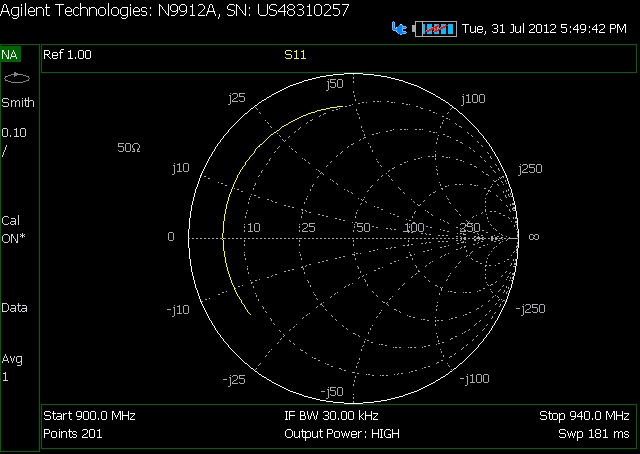 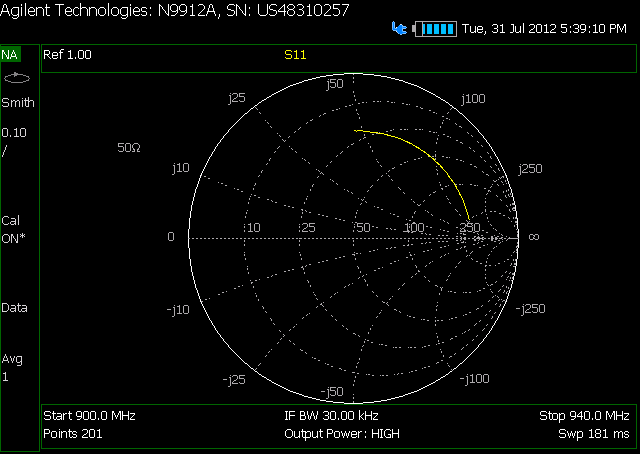 Here are the log plots of attenuation over the frequency range I am interested in: First no attenuator: 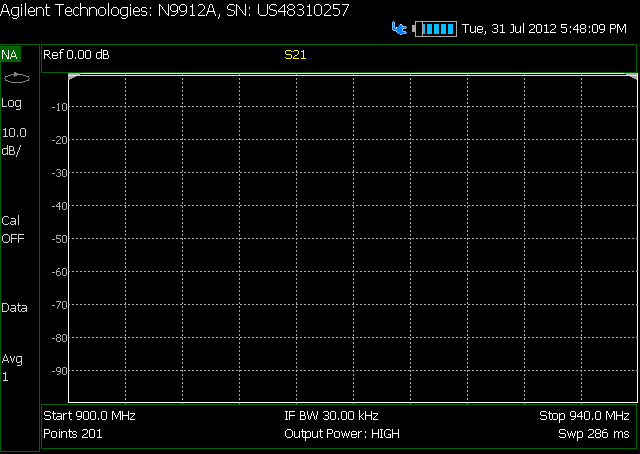 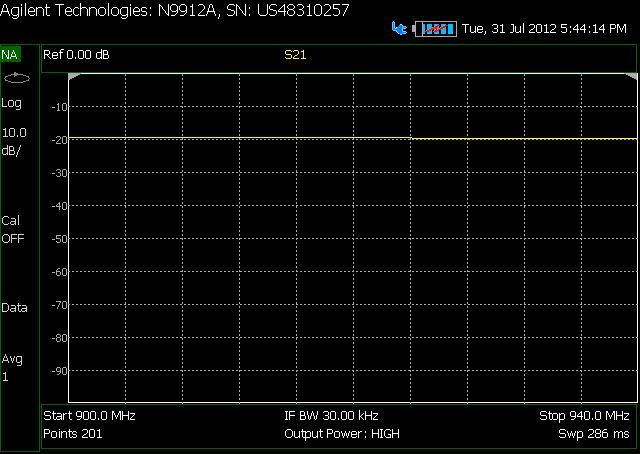 Also, another question struck me. If I'm just trying to reduce signal power at the output, does it matter where/how the loss happens? So I know poor impedance matching as indicated by my charts means a higher VSWR... but doesn't that just help attenuation? Thanks again.

A Smith Chart is not so much an attenuator design aid
as a means of evaluating and adjusting a design.

So - see attenuator articles below and then Smith chart articles.

Carbon resistors may be carbon film or carbon composition?

What is a Smith Chart?

Wikipedia gives a better than average concise summary:
From here

Somewhat gentle introduction - 27 page powerpoint intro - still gets deep quite quickly BUT a Smith Chart can be very very useful with almost no maths or numerics involved.

Superb Smith Chart resource - essentially an index of indexes - breaks subject up into sections and provides many references for each.

You'll understand this once you've read it :-) 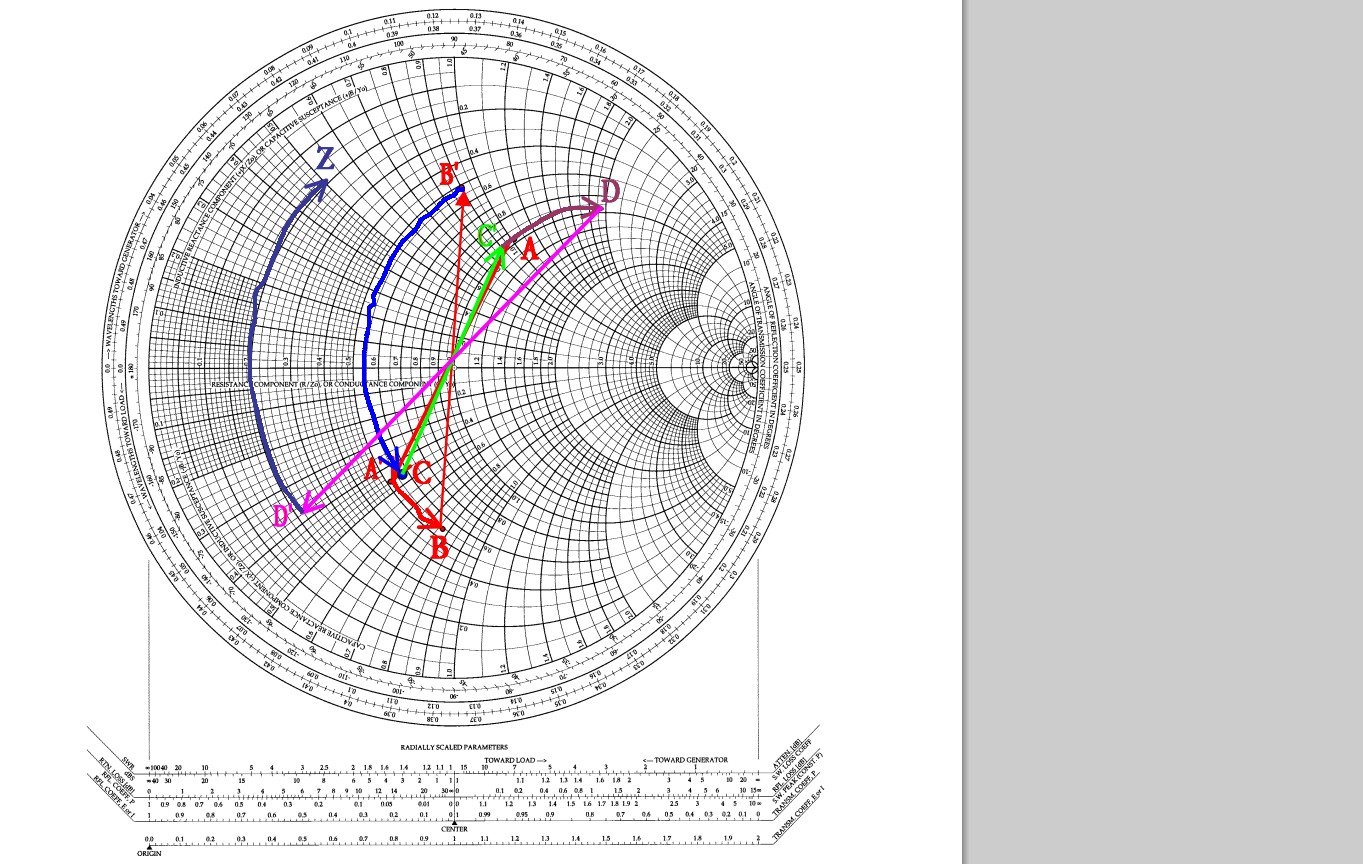 To give a very quick explanation of the Smith chart, it rests on one simple idea:

Where \$Z_0\$ is the characteristic impedance of the line. All of these variables are complex numbers.

The Smith chart is a graphical means of calculating this relationship.

Conversely you could plot your load impedance value by reference to the lines drawn on the chart, and read off the reflection coefficient by using a ruler to measure the distance from the chart's center and to locate the angle from the scale around the outer edge. 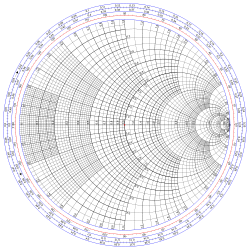 It's useful to be able to quickly switch between reflection coefficient and load impedance because certain circuit adjustments have an effect that's more easily calculated in one form or the other.

The curves drawn on the chart posted by Russell show examples of these kinds of transformations.

I should add that there's an alternative form of the Smith chart, called an admittance Smith chart, that looks the same but mirrored across the y-axis. This allows calculating the relationship between admittance and reflection instead of impedance. It's useful, for example, if you are adjusting your load by placing a parallel element instead of a series element.

Russel has given an extensive list of links to grasp the concept of the Smith Chart.

I'll try to give a short summary of what the Smith Chart does with the example. I am also a student and the concept was new for me.

The answer is 100% based on the perfect article by Maxim Integrated referred by Russel (URL).

Example (again borrowed from the article) 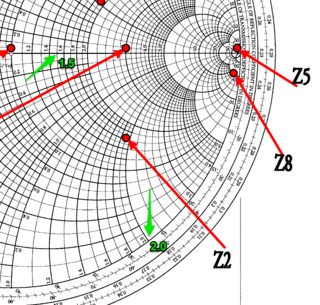 URL to the larger resolution image

Find the corresponding circles for r and x. Corresponding values are located at the horizontal axis (r) and at the big circle around the Smith Cart (x)(marked with green arrows): r=1.5, x=-2 (we added the minus sign because the point is located in the bottom half plane).
Remember to multiply by Z0.

Not the answer you're looking for? Browse other questions tagged rf attenuator smith-chart or ask your own question.

2
Is it possible to derive complex impedance (magnitude + phase) from VNA 1-port network?
1
Transmission Line Question
0
What is a good tolerance for impedance matching or how to calculate losses?

1
How to measure RF power with an oscilloscope?
4
Smith Chart Conjugate Matching
0
What options do I have to measure directly impedance change (ohm) or deduce it indirectly from S-Parameters?
0
How to plot Smith chart
4
Finding unknown load using a smith chart
1
Smith chart of λ/4 Transmission Line
2
Smith Chart for Dummies
1
Smith chart tutorial question
0
How to choose a 50 Ohm RF attenuator for radio, bluetooth and wifi power measurements